The October 2013 edition of the Lichfield Gazette carries the following full-page feature and photographs on page 14:

One of the interesting combinations of engineering, architecture and Victorian art in Lichfield is the colourfully-decorated Victorian railway bridge in Upper John Street, just west of Lichfield City rail station.

Upper John Street is crossed by this colourfully-decorated Victorian railway bridge, which is built of ashlar and cast-iron. The bridge, close to the junction with Saint John’s Hospital, was first built for the South Staffordshire Railway in 1849, and was later altered in 1882 and 1969.

On each side, the bridge is decorated with brightly-coloured heraldic insignia that encapsulate the story of the cathedral city and the arrival of the railway in Lichfield in 1847.

The railway came to Lichfield in 1847 with the opening of the Trent Valley Railway from Stafford to the Birmingham-London line at Rugby. The first station was in Streethay, over a mile from the city centre. Two years later, a second station was built in the centre of Lichfield when the South Staffordshire Railway was opened from Walsall through Lichfield to the Midland Railway at Wychnor, in Tatenhill.

The coats-of-arms on the bridge were selected by Richard Green of Stowe House, a Lichfield banker who paid for their carving. He was originally Chairman of the Lichfield Railways Committee, and a partner in the firm of Palmer Greene Bankers, which collapsed in 1855.

On the north side of the bridge, there are two pairs of relief armorial bearings below the frieze and one large one to the parapet.

The royal arms of England on the north side of the bridge (Photograph: Patrick Comerford)

The upper shields represent the old borough seal of Lichfield and the three lions passant guardant or leopards of England. These two shields were originally placed in the centre of the parapet, on the north and south sides of the bridge.

Lichfield’s ancient city seal displayed on the north side of the bridge perpetuates a mediaeval myth about martyrdom (Photograph: Patrick Comerford)

Lichfield’s ancient city seal shows three Christian knight martyrs, Lichfield Cathedral and a ring of trees. In the mid-13th century, a story developed that the name Lichfield meant “the field of corpses” and local lore said the name recalled the martyrdom of Saint Amphibalus, a follower of Saint Alban, and 1,000 of his disciples in Lichfield in the reign of the Emperor Diocletian ca 300.

There is no evidence of any cult of the martyrs, and the story is not mentioned in the cathedral chronicles. However, in 1549 the new City Corporation chose to incorporate symbols the mythical martyrdom in the design of its seal. The macabre seal depicts severed limbs, shields, swords, the cathedral and a grove of trees.

A century later, in 1651, the story of the martyrs, as told by local people, explained the vision of the Quaker George Fox, who said he saw blood flowing through the streets of Lichfield as he walked barefoot in the snow outside Saint Mary’s Church.

The lower shields on this side of the bridge are the coats of arms of four bishops of Lichfield:

● John Hackett (1592–1670): he became Bishop of Lichfield in 1661, immediately after the English Civil War. Following the destruction of the cathedral in successive sieges of the Close in the civil war, he had the task of restoring Lichfield Cathedral. Bishop Hackett’s arms are similar to those on his monument in Lichfield Cathedral.

● Roger de Clinton (died 1148): he rebuilt Lichfield Cathedral in the 12th century and was responsible too for introducing the medieval grid street plan for Lichfield that survives to this day. However, he was bishop in a pre-heraldic age and the arms attributed to him are those of the Diocese of Lichfield. These arms are in red and white, with a large cross in the centre between four smaller crosses: Party per pale, gules and argent, a cross potent and quadrate in the centre, between four crosses patée, all counter-charged.

● William Hayworth (died 1447): he was Bishop of Lichfield from 1419-1447, and was the original founder of Dr Milley’s Hospital on Beacon Street, which he endowed in 1424. He gave the site in Beacon Street on condition that a rose was given to the Bishop of Lichfield on the Feast of the Birth of Saint John the Baptist (24 June), a custom that was revived in 1987. The arms ascribed to Bishop Hayworth show eight bishops’ mitres against a blue background.

● John Lonsdale (1788-1867): a former Principal of King’s College, London, he was Bishop of Lichfield (1843-1867) when the railways came to Lichfield in 1847, and his vision that led to the foundation of Lichfield Theological College. Bishop Lonsdale’s arms are quartered in blue and white, with the second and third quarters displaying a black bugle. A gold band engraved with three amulets runs from the top right to the bottom left.

On the south side of the bridge, there are four armorial bearings representing local families:

The coats of arms of the Anson and Dyott families on the south side of the bridge (Photograph: Patrick Comerford)

● Anson: From 1831, the Anson family held the title of Earl of Lichfield. In 1847, the first earl’s son, Thomas George Anson (later the second earl in 1854), was the Liberal MP for Lichfield, while the earl’s younger brother, General George Anson (1797-1857), was Chairman of the Trent Valley, Midland and Grand Junction Railway and MP for Staffordshire South. Later, another member of the family, Bishop Adelbert John Robert Anson, was Master of Saint John’s Hospital, opposite this bridge. The arms of this branch of the Anson family are: Argent, three bends engrailed gules, and in the sinister chief point a crescent gules. However, this display omits the red crescent.

● Dyott: Richard Dyott (1808-1891) of Freeford Hall, south of Lichfield, He was a director of the South Staffordshire Railway and MP for Lichfield from 1865 to 1880. When he died at Freeford, he was buried at night in the family vault in Saint Mary’s Church, Lichfield, following a centuries-old family tradition. The arms here are also shown on many family monuments in the Dyott Chapel in Saint Mary’s: or, a tiger passant sable, armed and langued gules.

The coats of arms of the Forster and Bagot families on the south side of the bridge (Photograph: Patrick Comerford)

● Bagot: The Bagot family of Blithfield, near Rugeley, about six miles north of Lichfield, kept the famous Bagot herd of goats. Colonel Richard Bagot was a Governor of Lichfield Close during the English Civil War until he died on 7 July 1645 at the age of 26. Two days later, he was buried in the south aisle choir of Lichfield Cathedral. The Bagot arms on the bridge are: ermine, two chevronels azure.

Have another look at these colourful decorations the next time you are passing by. 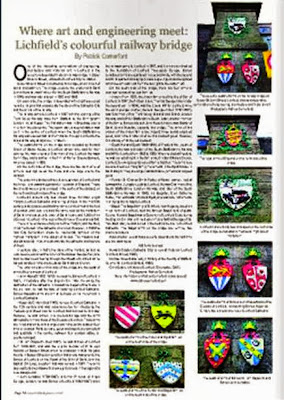