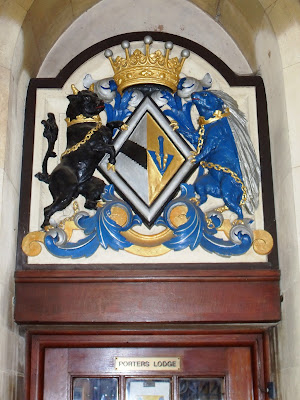 The coat-of-arms of Frances Sidney (1531-1589), Countess of Sussex, can be seen throughout Sidney Sussex College, the Cambridge college to which she gave her name and where I am staying for the next week.

But there are a number of monuments throughout Christ Church Cathedral, Dublin, with similar heraldic devices that show how closely the life of Frances Sidney Sussex was intertwined with events in Dublin and in the cathedral during the Tudor period.

Frances Sidney Sussex was the sister of Sir Henry Sidney, and in 1555 she married – as his second wife – Thomas Radclyffe (1525-1583), Viscount FitzWalter, who became Lord Deputy of Ireland in 1556 and who succeeded his father as the 3rd Earl of Sussex in 1557.

Sussex was Lord-Lieutenant of Ireland during the Tudor period and a leading courtier. He arranged the marriage of Queen Mary Tudor and Philip II of Spain, and in 1556 she appointed him Lord Deputy of Ireland. On his arrival in Ireland he set to the shiring and plantation of Queen’s County (Laois) and King’s County (Offaly), which he named after Mary and Philip.

In 1559, he took part in the coronation of Queen Elizabeth, and he returned to Ireland the following July as Lord Lieutenant. In 1562, he took a personal interest in restoring Christ Church Cathedral, Dublin, after the south wall and vaulted roof of the nave collapsed. 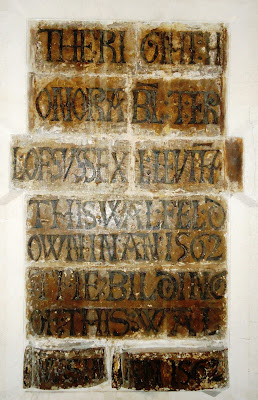 The monument erected in 1891 recalling Sussex’s rebuilding of the south wall of Christ Church Cathedral in 1562 (Photograph: Patrick Comerford, 2013)

A monument on the south wall was assembled in 1891 using rediscovered fragments of carved text recording the role of Lady Frances’s husband in that Tudor restoration in 1562. It reads:

Sussex returned to England in 1566, and became Lord Chamberlain in 1572. Thomas died in 1583 and his widow Frances died in 1589. They had no children, and in her will Lady Sussex left £5,000 and other bequests to found a new college at Cambridge “to be called the Lady Frances Sidney Sussex College.” 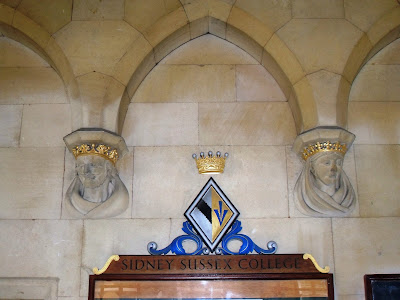 The college was founded seven years after her death. Naturally, her coat of arms decorates many of the buildings throughout the college, is used the college’s own arms, the college mascot is the blue and gold porcupine from the Sidney family coat of arms which she also used, and the Sidney Sussex alumni magazine is called the Pheon.

Her brother, Sir Henry Sidney (1529-1586), was brought up in the court of Henry VIII as the companion of Prince Edward, afterwards King Edward VI, and he continued to enjoy royal favour, particularly during the reign of Queen Elizabeth I.

In 1556, he went to Ireland with his brother-in-law, Lord Sussex, and during the absence of Sussex in England in 1558 Sidney had sole responsibility for the government of Ireland. At the accession of Queen Elizabeth in 1559, he had chief control once again until Sussex returned in August 1559.

The monument at the top commemorates Elizabeth Sidney who died in 1567 (Photograph: Patrick Comerford, 2013)

In 1565, Sidney was appointed Lord Deputy of Ireland. In 1567, his daughter Elizabeth died in Dublin and was buried, perhaps in Christ Church Cathedral, for he had a monument erected to her memory, and a portion of it can still be seen at the top of a series of four fragments in the south transept of the cathedral. Another daughter, Mary Sidney, married Henry Herbert, 2nd Earl of Pembroke, and became one of the most celebrated literary figures of her time; her sons were first cousins of George Herbert, the priest-poet.

That autumn (1567), Sidney returned to England, but after an absence of less than a year he returned to Ireland and in 1569 he oversaw the opening of parliament, the first to sit in Ireland for a decade.

A year later, in 1570, Sidney erected or restored a monument that to this day is still referred to as Strongbow’s monument.

A mural tablet nearby, and close to the slab commemorating his brother Sussex, reads: 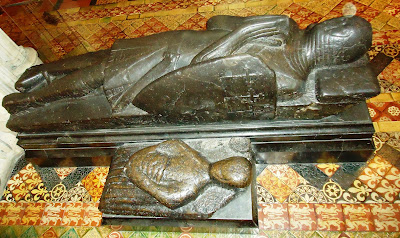 Are these the monuments of Strongbow and his wife … or son? (Photograph: Patrick Comerford, 2013)

The figure lying by the side is said to be that of Strongbow’s wife, Eva (Aoife), or of one of his sons. The mutilated condition of the second monument is said to be a result to the fall of the roof that destroyed Strongbow’s original monument. But is this Strongbow? And is this his wife or his son?

Some authorities now say that this was originally the monument of Thomas FitzJames FitzGerald, 8th Earl of Desmond, who was beheaded in Drogheda in 1467. It is said that Sir Henry Sidney brought it to Christ Church to replace Strongbow’s original monument, destroyed by the fall of the south wall in 1562 when Lord Sussex was Lord Lieutenant. 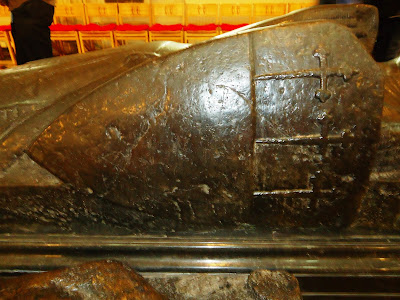 The coat-of-arms on the larger monument is not that of Strongbow (Photograph: Patrick Comerford, 2013)

However, John H Glascott of New Ross, Co Wexford, who was an expert in heraldry at Ulster’s Office in Dublin Castle, pointed out that the arms on the shield are not those of the Earl or Desmond, but those of FitzOsbert, one of Strongbow’s followers (Argent on a chief azure three crosses crosslet fitchee of the field).

However, there is also an inscription to the memory of Strongbow in the cloisters of Gloucester Cathedral, while another legend claims he was buried in Saint Edan’s Cathedral, Ferns, Co Wexford. 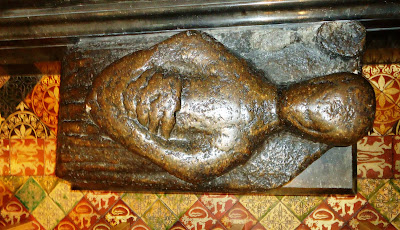 Others say the smaller figure, once known as Eva’s monument, is, in fact, that of a knight from the 13th century, and point out that it is made of different stone.

Dr Stuart Kinsella, in his delightful and painstaking survey, Christ Church Cathedral Dublin: a survey of monuments, also points out that this smaller figure is associated with a gory legend about a son of Strongbow who was cut in two by his father as punishment for cowardice in the field of battle.

But the legend may have been invented in the 1560s and 1570s, when the monuments were being reassembled or put together and put in place after the rebuilding work on the south side of the cathedral by Sidney and Sussex. The first authenticated mention of the story is by the Dublin historian, Richard Stanihurst, in 1584, a year after Lady Sidney Sussex’s husband had died.

The interest in Strongbow may not be unconnected with the fact that Mary Sidney’s husband, Henry Herbert, was 2nd Earl of Pembroke, a title first held by Strongbow 400 years earlier.

Meanwhile, her brother, Sir Henry Sidney left Ireland in 1571, but he returned again in 1575 for a second term as Lord Deputy. 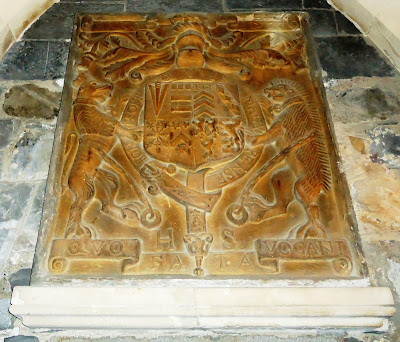 During this second term as Lord Deputy (1575-1578), Sidney – like his sister’s husband – took an interest in the restoration of Christ Church Cathedral, and it is recorded that he contributed towards “the building of the steeple and repair of the church.”

In thanks, his coat of arms was erected in the cathedral in 1577. Originally, it was placed over the entrance to the North Choir Aisle, but it is now set on the north wall in the north transept, which is now set aside as a chapel for quiet and private prayer. Sidney’s arms on that wall show a shield with a pheon or broad arrow in the first quarter, similar to part of the coat-of-arms of Sidney Sussex, and a lion and a porcupine as supporters on either side. The motto, Quo Fata Vocant, translates: “Where Fate Calls.”

Below, a slab of black marble on the floor appears to be inscribed 1588. But some commentators point out that the ends of the figures 8 are cut at the base or figuratively halved, and say that the true date of the inscription is 1544.

Sidney was finally recalled to England in September 1578, and died in 1586. His sister Frances died three years later in 1589 and bequeathed her wealth and name to Sidney Sussex College.

A week at the IOCS summer school in
Sidney Sussex College, Cambridge

I arrived back in Cambridge this morning [Saturday 13 July 2013] for the 14th International Summer School organised by the Institute for Orthodox Christian Studies.

Having moved temporarily to Westminster College last summer, the school returns to Sidney Sussex College this year, and I am staying once again in rooms in Blundell’s Court, overlooking the woodland and gardens, where there is a wedding this afternoon. The summer school opens tomorrow [Sunday 14 July 2013] with registration, Vespers in the college chapel, and dinner followed by a reception in the college garden.

This year’s summer school, which continues until next Friday [19 July 2013], is on the theme ‘Angels: Heavenly and Fallen.’

We begin and finish each day with the Divine Liturgy or Morning Prayer and Vespers in the College Chapel.

The faculty for this week’s summer school includes:

● Metropolitan Kallistos of Diokleia, who speaks on ‘Demonic Temptation: the Teaching of Saint Mark the Monk (5th century).’
● Dr Marcus Plested, the Vice-Principal and Academic Director of IOCS, who introduces the theme on Monday morning.
● Professor David Frost, the Principal of IOCS, who lectures on ‘Milton’s Satan’ on Monday afternoon.
● Aidan Hart, the icon writer, who lectures on ‘The Historical Development of Angels and Demons in Eastern and Western Iconography’ and ‘How the Different Ranks of Angels are Depicted in Orthodox Iconography.’
● Father Alexander Teft, chaplain at IOCS.
● Dr Christoph Schneider, Lecturer and Bursar, IOCS.
● Deacon Dragos Herescu, Assistant Lecturer and Secretary of the Institute.
● Razvan Porumb, Assistant Lecturer and Development Officer of the Institute.
● Father Ian Graham from the Greek Orthodox Church in Oxford.
● Father Philip Steer of the Diocese of Sourozh in the Russian Orthodox Church.
● The Very Revd Archimandrite Zacharias (Zacharou), a monk of the Monastery of Saint John the Baptist and a disciple and spiritual child of Elder Sophrony.
● Dr Sebastian Brock, former Reader in Syriac Studies in the University of Oxford and Professorial Fellow of Wolfson College.

We are spending Wednesday [17 July] in the Stavropegic Monastery of Saint John the Baptist in Tolleshunt Knights, Essex, an annual pilgrimage that has become a welcome part of my spiritual calendar.

I also hope there will be an opportunity during the coming week the visit Palamas House, the new premises of the Institute for Orthodox Christian Studies at 25-17 High Street, Chesterton, Cambridge, CB4 1ND.

Palamas House was formally opened last Saturday [6 July 2013]. The celebrations began at Saint Andrew’s Church, Chesterton, with a Liturgy of Thanksgiving, followed by a procession with the icons along Church Street to Palamas House.

There is a Special Dinner in the College Library in Sidney Sussex College on Thursday evening, and the course ends with a Service of Thanksgiving on Friday afternoon. 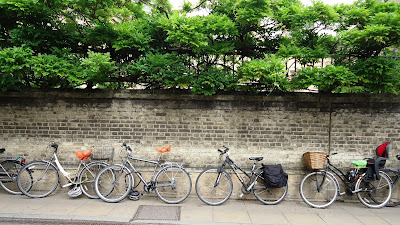