A Dander through Adare 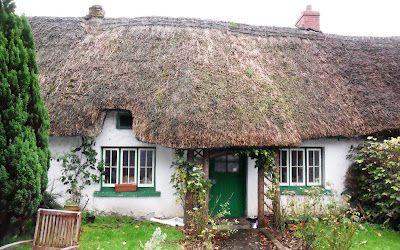 I tasted the thousand charms of Adare a few weeks ago on my way back to Dublin from Killarney. Adare, which many regard as one of Ireland’s prettiest villages, is a heritage town with a population of about 2,600 people, 16 km from Limerick City.

Adare has inherited architectural wealth of great beauty, and is a major tourist destination, with three well-known hotels – the Adare Manor, the Dunraven Arms and Fitzgerald’s Woodlands House Hotel – and eight restaurants. Many tours of the south-west stop in the village, which is also a popular wedding and conference venue. Adare is also fast becoming a golf destination with two 18-hole courses – the Adare Golf Club, which hosted the Irish Open in 2007 and 2008, and the Adare Manor Golf Club.

The popularity of Adare is due in large part to the village’s picture-postcard main street, with its thatched cottages and picturesque houses and streets, designed and purpose-built for the Dunraven estate and decorating the entrance to Adare Manor.

To take a stroll though Adare’s streets is to be brought back in time and through history to a place where the mix of centuries is part of everyday life. The main street is punctuated with beautiful stone buildings, mediaeval monasteries and ruins and a picturesque village park. The thatched cottages have survived for hundreds of years, and some of those cottages are home to arts and crafts shops and restaurants, while others are still privately owned. 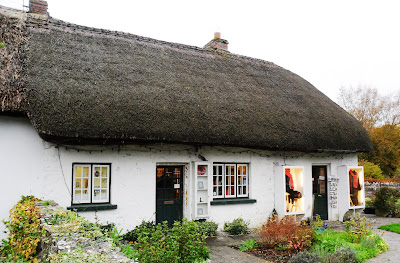 Some of the old cottages have been turned into craft shops (Photograph: Patrick Comerford)

Standing on the banks of the River Maigue, a tributary of the Shannon, Adare is steeped in history dating back to 1200. Historically a market town, this became a major settlement in the Middle Ages, enriched by the presence of at least three monastic foundations and a castle.

Originally, the ancient town of Áth Dora, the “ford of the oaks,” stood on the eastern bank of the River Maigue, near a crossing point or ford known as Ardshanbally (Ard an tSeanbhaile – “high ground of the old town”).

The present town, which stands about half-a-mile west on the other side of the river, has been at the heart of many rebellions, wars and conquests, leaving behind a legacy of historical monuments. In the 19th century, the Earls of Dunraven laid plans for the existing streets and houses in Adare, and many of those houses and buildings survive to this day. 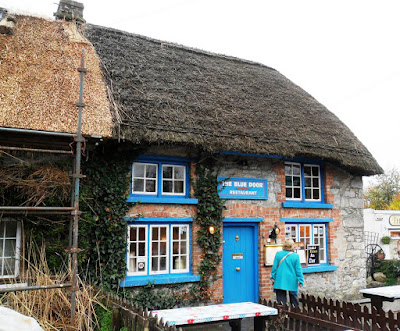 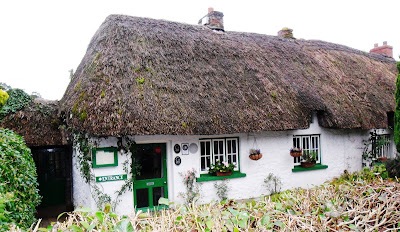 Adare’s restaurants are famous ... some are in the charming thatched cottages (Photograph: Patrick Comerford)

A castle is said to have first been built on the banks of the River Maigue by the O’Donovans, who dominated the region until the arrival of the Anglo-Normans. The castle later came into the possession of the Kildare branch of the FitzGerald dynasty.

The castle remained in their hands for almost 300 years until the rebellion of Silken Thomas in 1536, when it was forfeited and granted in 1541 to FitzGerald, Earl of Desmond. The FitzGeralds of Kildare later recovered the castle, but it retained the Desmond name.

Desmond Castle is regarded as one of the most interesting examples of feudal architecture in Ireland, and an extensive programme of renovation has been in progress since 1996. 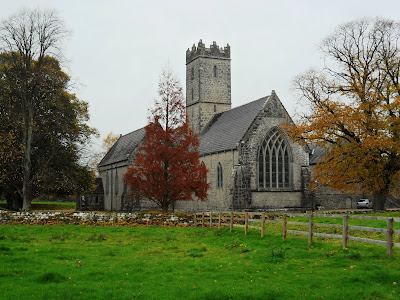 Saint Nicholas’, the Church of Ireland parish church, is a short walk from the village on the road out to Limerick City, on the banks of the River Maigue.

The church was founded as an Augustinian Priory in 1316 by John FitzThomas FitzGerald, 1st Earl of Kildare. Once known as the Black Abbey, it is a fine example of a mediaeval Irish church, and remained a priory until the dissolution of the monastic houses in the 16th century.

The priory church was repaired and renovated in the early 19th century and became the Church of Ireland parish church in 1807, replacing the Manorial Parish Church of Saint Nicholas of Myra. This stood near the Desmond Castle and fell into ruins after 1806. 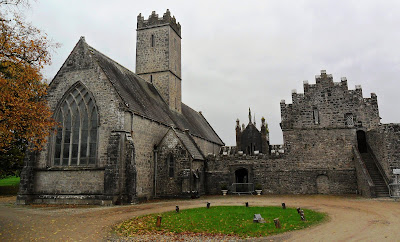 Saint Nicholas’ Parish Church with the Dunraven Mausoleum and the school in the former refectory (Photograph: Patrick Comerford)

In 1814, the refectory was roofed and converted into a schoolhouse. Between 1852 and 1854, a second restoration of the church was undertaken by Caroline, Countess of Dunraven. The church complex now includes the former Augustinian cloisters, a school dating from 1814, and the Dunraven Mausoleum, which dates from 1826. 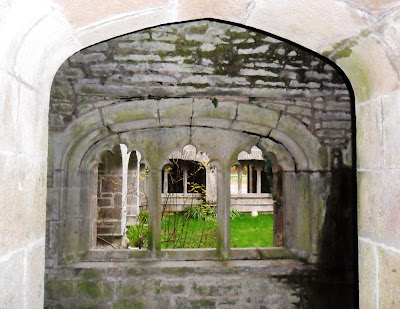 Next to the Adare Heritage Centre, the early 13th century Holy Trinity Abbey Church was the only monastic house established in Ireland for the “White Friars” or monks of the “Trinitarian Canons of the Order of the Redemption of Captives.” The abbey was built by Lord Ossory ca 1230-1240 for the order, founded in France to raise ransoms to rescue captive Crusaders. 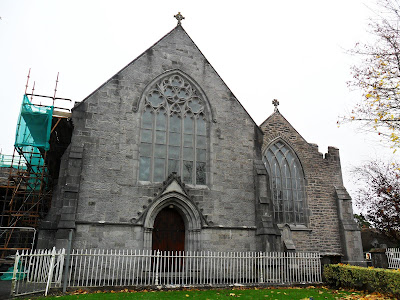 Holy Trinity Church, an abbey transformed into one of the most charming Roman Catholic parish churches (Photograph: Patrick Comerford)

The Trinitarian Abbey was suppressed at the Reformation, but the church was restored, repaired and enlarged from 1811 on by the 1st Earl of Dunraven and his son as the Roman Catholic parish church. This must be the most attractive Roman Catholic parish church in Ireland. The bronze rood-screen, designed by Edward Pugin, was the gift of the 4th Earl of Dunraven in 1884. 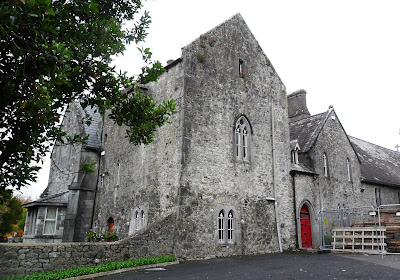 In the grounds of Adare Manor stand the ruins of the Franciscan Friary, founded in 1464 by Thomas FitzMaurice FitzGerald, 7th Earl of Kildare, for the Franciscan Friars of the Strict Observance. The poet Nicolás Ó Domhnaill, a former Professor of Philosophy in Louvain, was guardian of the Penal-era Franciscan community in Adare in the mid-18th century, and John Wesley preached by the friary when he visited Adare in 1765. Although the friary is now in ruins, a dawn Mass is celebrated there every Easter Day.

The Quins of Adare Manor 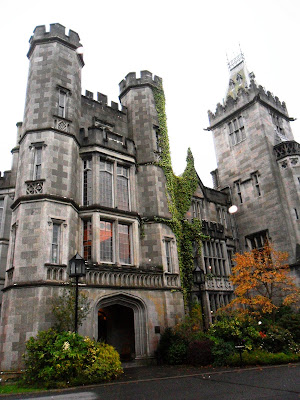 Adare Manor, the ancestral home of the Earls of Dunraven, was designed by Pugin and Hardwick (Photograph: Patrick Comerford

For generations, Adare benefitted from the benign patronage of the Quin family, Earls of Dunraven and descendants of Thady Quin (1645-1725), from Inchiquin, Co Clare, a lawyer who leased Adare Castle and estate from the Earl of Kildare in 1683. Valentine Quin built the first manor at Adare (1720-1730), and was the grandfather of Valentine Richard Quin (1732-1824), who became the 1st Earl of Dunraven. His son, Windham Henry Quin (1782-1850), was an MP for Co Limerick before succeeding as second earl.

The second earl increased the family’s wealth and property in 1810 when he married an heiress from Wales, Caroline Wyndham of Dunraven Castle, Glamorgan – a marriage that altered the family name and influenced his father’s choice of title when he became a peer.

Gout prevented the second earl from spending his time fishing and shooting. Instead, he and his wife rebuilt Adare Manor as a Tudor-Gothic mansion, building the new house around the older one, which was demolished only when the work was near completion. He was also involved in the foundation of Saint Columba’s College in 1843, along with the Revd William Sewell and the Archbishop of Armagh.

Edwin Wyndham-Quin (1812-1871), 3rd Earl of Dunraven, was involved in the influence of the Oxford Movement until he converted to Roman Catholicism – Cardinal Newman visited him at Adare Manor on 25 February 1854. His brother-in-law, William Monsell (1812-1894), Lord Emly, became a Roman Catholic too, and Newman is said to have written The Idea of a University while he was Emly’s guest in Co Limerick.

The third earl was also an enthusiastic archaeologist and astronomer. For three years, he worked at the Dublin Observatory with Sir William Rowan Hamilton, and he was a prominent member of the Royal Irish Academy and several archaeological associations.

The third earl employed the English architect Philip Charles Hardwick (1822-1892) to complete AWN Pugin’s work at Adare Manor. Hardwick built a new wing and the Wyndham Tower, designed the gardens, and also worked in the village, designing a monumental cross and well and the Mercy Convent and schools near the old Trinitarian Abbey, and he completed the restoration of both the Roman Catholic and Church of Ireland parish churches. Phoebe Stanton suggests AWN Pugin was also involved in the restoration of one of these churches.

Hardwick’s work at Adare brought commissions to design both Saint John’s Roman Catholic Cathedral and the Redemptorist Church of Saint Alphonsus Liguori in Limerick. He also designed new buildings for Saint Columba’s College when the school moved to Rathfarnham, including the old chapel, hall and cloisters.

Lord Dunraven travelled to Scotland with Montalembert when he was researching his Monks of the West, one volume of which is dedicated to Dunraven: Prænobili viro Edvino Wyndham Quin, Comiti de Dunraven. Later, the third earl took a photographer with him as he visited almost every corner and offshore island of Ireland. He planned an exhaustive, illustrated account of the archaeological and architectural remains of Ireland, but died in 1871 before the project was complete. Two illustrated folios, Notes on Irish Architecture, were published in 1875 and 1877.

Windham Wyndham-Quin (1841-1926), 4th Earl of Dunraven, was a war correspondent for the Daily Telegraph in Abyssinia (Ethiopia), in the Franco-Prussian war and at the Siege of Paris. He hunted with Buffalo Bill in Texas, and witnessed the signing of both Treaties of Versailles, in 1871 and 1919.

As a steeplechaser, he ran a successful racing stud. As a yachtsman, he failed to win the America’s Cup with his yachts Valkyrie II and Valkyrie III in 1893 and 1895, and when he disputed the conduct of the races he was denied membership of the club. During World War I, he ran his steam yacht as a hospital ship in the Mediterranean. At the foundation of the Irish Free State in 1922, he became a senator. When he died four years later, he was buried in the Dunraven Mausoleum at Saint Nicholas’ Church.

Thady Wyndham-Quin, the seventh and present Earl of Dunraven, was born in 1939 and was disabled by polio as a schoolboy. At one time, the Dunraven estates extended to over 39,000 acres. However, unable to bear the expense of maintaining Adare Manor, he sold the house, its contents and the estate in 1984, reputedly for £2 million.

Adare Manor is now an hotel and golf course, Lord Dunraven lives with his family nearby in Kilgobbin House, and the Dunraven family papers are held by the University of Limerick.

The main Limerick-Tralee road, the N21, sees a heavy volume of traffic trundle through Adare each day, and badly-needed work on the Adare bypass is not likely to begin until later this year.

But Adare is still one of Ireland’s most picturesque villages. Just 15 minutes south of Limerick City and 40 minutes from Shannon airport, it is a counterfoil to many of the popular images of Limerick, and is worth a visit for its churches and its charm and beauty.

Canon Patrick Comerford is Director of Spiritual Formation, the Church of Ireland Theological Institute, and a canon of Christ Church Cathedral, Dublin. This essay was first published in the February 2011 edition of the Church Review (Dublin and Glendalough) and the Diocesan Magazine (Cashel and Ossory).