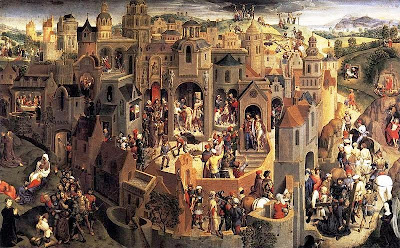 I was talking yesterday of the ways in which Advent and Lent are journeys or pilgrimages as we move towards the presentation of Christ to the World – Christ the Incarnate God at Christmas, and the Risen Christ triumphant on Easter Day.

I wrote then that the major events of Christ’s life are brought together by Hans Memling in his painting Advent and the Triumph of Christ.

This morning (13 March 2014) I have chosen as my work of Art for Lent a painting in which Memling uses a similar narrative style: Scenes from the Passion of Christ.
This is an oil painting on a panel of Baltic oak. It was painted by Memling ca 1470 and shows 23 episodes from Holy Week and Easter combined in one narrative composition without a central dominating scene. These include 19 episodes from the Passion of Christ, one of the Resurrection, and three later appearances of the Risen Christ: to Mary Magdalene, on the Road to Emmaus, and at the Sea of Galilee.

The painting was commissioned by Tommaso Portinari, an Italian banker based in Bruges. He is depicted in a donor portrait, kneeling and praying in the lower left corner, with his wife Maria Baroncelli in a similar attitude in the lower right corner.

The painting is relatively small, measuring 56.7 cm × 92.2 cm, and may not have been an altarpiece. Instead, it may have been intended for Portinari’s chapel in the Church of Saint Jacob in Bruges. It was not listed in the catalogue of Portinari’s belongings when he died in 1501. It may have been moved from Bruges to Florence between 1510 and 1520.

The scenes of the Passion start in the distance at the top left with Christ’s entry into Jerusalem on Palm Sunday, passes through the town and out again to the bottom left to the Garden of Gethsemane, through the Passion scenes in the centre of the city (the Judgment of Pilate, the Scourging of Christ, the Crowning with Thorns, and Ecce Homo).

It then follows the procession of the cross back out of the city to the bottom right, then up to the top for the Crucifixion, and ending in the distance at the top right with the appearances at Emmaus and in Galilee.

This painting includes seven of the traditional 14 Stations of the Cross, but Memling adds several scenes before and after them, and omits the other half of the traditional stations: Christ being given his cross, two occasions when he falls carrying the cross, Christ meeting his mother, Veronica wiping the face of Christ, Christ meeting the women of Jerusalem, and Christ being stripped of his garments.

The scenes are distributed in and around an idealised Jerusalem, depicted as a walled mediaeval city with exotic towers topped by domes.

The chronology and images depicted are:

1, Christ rides into Jerusalem on a donkey on Palm Sunday

2, Christ drives he money-changers from the Temple

5, Christ prays in the Garden of Gethsemane

6, The arrest of Christ

7, The denial of Christ by Peter

9, The Scourging at the Pillar

10, The second interrogation of Christ by Pilate

11, The Crowning with Thorns

17, The deposition, Christ is taken down from the Cross

18, Christ is buried in the tomb

19, Christ descends to the dead, or the Harrowing of Hell

21, Noli me Tangere, The Risen Christ meets Mary Magdalene in the Garden

22, Christ meets the Disciples on the Road to Emmaus

23, Christ appears to the Apostles at the Sea of Galilee