‘Peace of mind ... before all the clamours of success’ 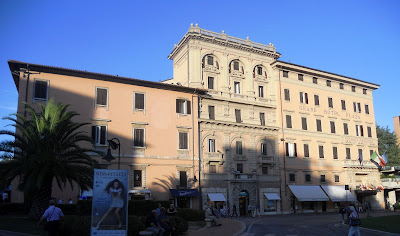 I have arrived in Tuscany and I am spending the next week at the Grand Hotel Plaza and Locanda Maggiore in Montecatini Terme, between Florence and Pisa.

I arrived at Bologna this afternoon, and over the next week I hope to visit Florence, Pisa, Lucca, Siena and San Gimignano.

The story of the Grand Hotel Plaza and Locanda Maggiore is intimately linked with the history and fortunes of Montecatini Terme. The name Locanda Maggiore was originally given to five interconnected buildings that went on to become the major hotel in this Tuscan town.

The hotel, now called Grand Hotel Plaza and Locanda Maggiore, was given its present appearance by the architect Felice Bisleri.

As this spa resort declined in international popularity, the Locanda Maggiore closed in 1960. But a group of companies later decided to give the hotel back to the town, with its perfectly preserved halls and decorations dating back to the golden age of the most famous European locanda or inn.

From the beginning, the hotel has welcomed prominent national and international guests, including politicians, composers, industrialists, financiers, writers and musicians.

But perhaps the most interesting visitors were the composers Gioacchini Rossini, who was a guest here in 1852, and Giuseppe Verdi, who lived here between 1882 and 1900. 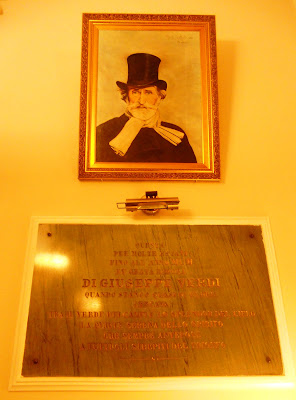 A marble plaque and portrait in the hotel lobby commemorate Verdi, who lived here from 1882 to 1900 (Photograph: Patrick Comerford, 2012)

A marble plaque above a piano and beneath a portrait opposite the reception desk in the lobby says: “For many summers, until 1900, this was the graceful residence of Giuseppe Verdi who, tired of glory, would seek peace of mind among the green fields and the splendour of the sky, which he always put before all the clamours of success.”

But, while he was living in Montecatini, the Great Maestro from Busseto never put aside his work. Here he spent many hours working on his scores, and it was here he finished the fourth act of Othello, his last opera but one, which had its premiere at La Scala in Milan on 5 February 1887.

He is remembered in the hotel with such pride to this day that the portrait in the lobby is used to decorate the wrappings and packaging on the hotel soap, bath cream, shampoo – even the shower caps.

I’m off to Florence in the morning, but there’s a promise of a performance of Verdi’s La Traviata tomorrow evening.

Posted by Patrick Comerford at 23:12 No comments: