What’s in a name, James?

What’s in a name … but is it St James or St James’? (Photograph: Patrick Comerford)

Saint James, the Brother of our Lord

What’s in a name?

I am sure I am like everyone else here when I feel uncomfortable those times when people get my name wrong. It challenges my sense of identity and personality when someone calls me by the wrong name.

It’s all right – just all right – when my mother calls me Paul. But when others call me by any other name other than Patrick, or any variation of my name, I feel uncomfortable and unsettled.

So I understand why the supporters of Newcastle United were upset a year ago when the name of Saint James’ Park was changed to the Sports Direct Arena.

Newcastle fans were a little more than unhappy with the plans to rename St James’ Park, and voiced their anger at owner Mike Ashley’s decision to rebrand the stadium. At matches, many carried placards bearing messages such as: “Stand up for St James’.”

And as I watched the Derby match between Newcastle United and Sunderland at the Stadium of Light on Sunday afternoon with a big Newcastle fan in our family, I understood how delighted the Toon fans were when the name of Saint James was restored to their grounds earlier this month – even if they continue to disagree about where the apostrophe should be placed and whether there is one or two letters ‘S’ in the name. 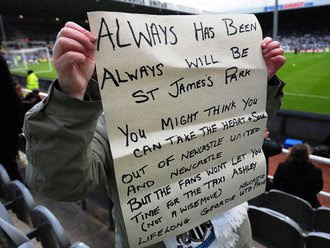 Toon fans have been a little more than unhappy

Mind you, Sunderland supporters, in jest, sometimes refer to the place as “Sid James’ Park,” in reference to Sid James, the Carry On comic actor.

But it all goes to show how names are part of identity and culture and personality and, as the boy named Sue in the Johnny Cash song knew, they can influence and shape how we behave.

When we understand that we can understand how the Prophet Isaiah can say in this morning’s Old Testament reading:

The Lord called me before I was born,
while I was in my mother’s womb he named me. – Isaiah 49: 1

The kinship between James and Jesus is difficult to unravel for those who believe in the perpetual virginity of the Virgin Mary. Roman Catholic and Eastern Orthodox traditions say they were half-brothers or step-brothers and that Joseph already had children – that James was already a boy when Jesus was born (see Matthew 13: 55).

The Gospels name the brothers of Jesus as James, Jude, Simon and Joses or Joseph (Matthew 13: 55; Mark 6: 3; see also Galatians 1: 19). Even Josephus in his Jewish Antiquities (20.9.1) describes James as “the brother of Jesus who is called Christ.”

Some say Jesus and James could have been cousins, saying “brothers” and “sisters” in the Aramaic spoken by Jesus also applied to cousins, and that the Greek words ἀδελφός (adelphos) and ἀδελφή (adelphe) were not restricted to their literal meaning of a full brother or full sister. However, in the classical Greek from the time of Homer on, these words convey an idea about being “from the same womb.”

Whichever opinion you accept, this James is the James who is called James the Less (Mark 15: 4) to distinguish him from James, the son of Zebedee, who we encountered with John in our Gospel reading on Sunday morning.

This morning’s Saint James is usually identified with the author of the Epistle of James. The Apostle Paul names him as one of the witnesses to the Risen Christ (I Corinthians 15: 3–8), and describes James, alongside Peter and John, as a pillar of the early Church (Galatians 2: 9).

James was so important in the Early Church that Eusebius describes him as the first Bishop of Jerusalem (Eccl. Hist., Book II: 23). This James met his death in the year 62, when he was thrown from the wall of the Temple on the day of the Passover.

The Letter of James can be compared with some of the wonderful Wisdom Literature in the Hebrew Scriptures, with, for example, its challenging words of wisdom on true worship (James 1: 19-20), on discrimination and respect for the poor (2: 1-13), on the false dichotomy of faith and works (2: 14-26), on truth and careful speech (3: 1-12), on godliness and worldliness (4: 1 to 5:6), on putting love at the heart of all our relationships in the Christian community … and so on.

We are to value one another, but not because of wealth or status or intellect. We are to listen to one another, to be slow to speak and equally slow to anger; to bridle our tongues and not to speak loosely about one another. We are not just called to be Christians, but we must do Christianity too.

How many of us would like to be so close to Christ that we could be called brothers or sisters of the Lord, still more “the brother of God” (Iάκωβος ο Αδελφόθεος Iákobos o Adelphótheos)? To be a real brother of Christ, to be a real brother of God, is to be brothers and sisters to one another in Christ. And when we do that we are true brothers and sisters of Christ, true witnesses to the Risen Christ, and worthy of the name “Christian.”

Canon Patrick Comerford is Lecturer in Anglicanism and Liturgy, the Church of Ireland Theological Institute. This sermon was preached at the Eucharist in the Institute Chapel on 23 October 2012.