‘Weep for the waste of all that might have been,
weep for the cost that war has made obscene’ 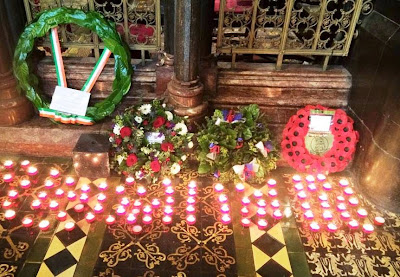 I spent much of today in Christ Church Cathedral, Dublin, taking part in the Cathedral Eucharist this morning [26 April 2015] and in Choral Evensong this afternoon which was a Service of Remembrance marking ANZAC Day and the 100th anniversary of the Gallipoli landings in April 1915.

My grandfather was in Turkey and Thessaloniki in 1915-1916 with the Royal Dublin Fusiliers, and so it was particularly poignant but also an honour to robe and take part in this afternoon’s service as a member of the cathedral chapter.

Anzac Day has been marked in Ireland since 1990 when the New Zealand and Australian communities first gathered on 25 April 25 to honour the memories of Anzac soldiers. There has been an Anzac ceremony every year since then with the focus gradually extending to include Irish participants.

This evening’s service was sung by the Cathedral Choir, and the music included Philip Moore’s Responses, the canticles from Stanford’s Evening Service in G and John Ireland’s ‘Greater Love,’ which was sung as an anthem.

Ireland’s anthem is based on Scriptural verses from the Song of Songs, John 15; and I Peter:

Many waters cannot quench love, neither can the floods drown it.
Greater love hath no man than this, that a man lay down his life for his friends.

Who his own self bare our sins in his own body on the tree:
that we, being dead to sins, should live unto righteousness.
Ye are washed, ye are sanctified, ye are justified in the name of the Lord Jesus.

Ye are a chosen generation, a royal priesthood, a holy nation:
that ye should show forth the praises of him
who has called you out of darkness into his marvellous light.

I beseech you, brethren, by the mercies of God,
that you present your bodies, a living sacrifice, holy, acceptable unto to God,
which is your reasonable service.

As the choir sang, members of the congregation took part in an act of remembrance, bringing forward lighted candles and placing them in front of the wreaths that had been laid at the rood screen at the beginning of the service.

It was comforting to know that there was one candle there for my grandfather.

The address was delivered by the Deputy Ambassador of New Zealand, Mr Rob Taylor, and others taking part in the service included the Australian Ambassador, Dr Ruth Adler, and the Minister for Arts, Heritage and the Gaeltacht, Heather Humphreys, TD.

At one point, we heard the words written by Ataturk in 1934 as his tribute to the Turkish and allied dead who were buried together in Gallipoli:

Those heroes that shed their blood and lost their lives ... You are now lying in the soil of a friendly country. Therefore rest in peace. There is no difference between the Johnnies and the Mehmets to us. Where they lie side by side now here in this country of ours ... You mothers, who sent their sons from faraway countries, wipe away the tears. Your sons are now lying in our bosom and are in peace after having lost their lives on this land. They have become our sons as well.

I expected to hear hymns such as ‘O God, our help in ages past,’ ‘Kohima,’ the epitaph by John Maxwell Edmonds that has been provided with a setting by John Tavener, and the words from Laurence Binyon’s poem ‘For the Fallen’:

But for the first time I also found myself singing ‘The Anzac Hymn’ by Shirley Erena Murray:

Honour the dead, our country’s fighting brave,
honour our children, left in foreign grave,
where poppies blow and sorrow seeds her flowers,
honour the crosses marked forever ours.

Honour the brave whose conscience was their call,
answered no bugle, went against the wall,
suffered in prisons of contempt and shame,
branded as cowards, in our country’s name.

Weep for the waste of all that might have been,
weep for the cost that war has made obscene,
weep for the homes that ache with human pain,
weep that we ever sanction war again.

Honour the dream for which our nation bled,
held now in trust to justify the dead,
honour their vision on this solemn day:
peace known in freedom, peace the only way.

Earlier in the morning I had been subdeacon at the Cathedral Eucharist, assisting at the administration of Holy Communion.

Before going to lunch, I had taken a small group who are interested in movie locations on a private tour of the cathedral, showing them locations associated with the filming of the television drama series, The Tudors. 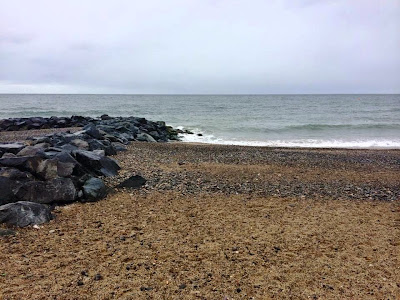 The beach at Bray on Saturday afternoon … a peaceful contrast with the beaches in the Dardanelles 100 years ago (Photograph: Patrick Comerford, 2015)

But before such a busy day, I had a walk on the beach in Bray late yesterday afternoon [25 April 2015], and a very late lunch in Carpe Diem.

As I walked back along the seafront after lunch, I was aware of the calm and peace of this beach today, and the horrors of the beaches by the Dardanelles 100 years ago.


Posted by Patrick Comerford at 21:18 No comments: