A day in Pisa and Lucca 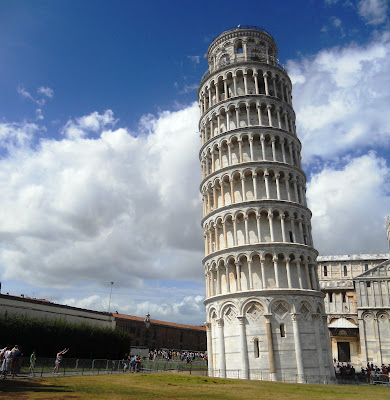 The Tower of Pisa ... still leaning after all those years (Photograph: Patrick Comerford, 2012)

My tour of mediaeval Tuscany continued yesterday [Friday 31 August], beginning in Pisa, which was once a naval power that rivalled the seafaring reputations of Amalfi, Genoa and even Venice.

The waters of the deltas of two rivers – the Arno and the Serchio – on which Pisa was built have since silted up and Pusa is so far inland today that is hard to imagine that Pisa was once a great Mediterranean port and an independent maritime republic dating back to the tenth century.

Indeed the town is so old that its Etruscan origins can be said to predate the foundation of Rome by centuries. 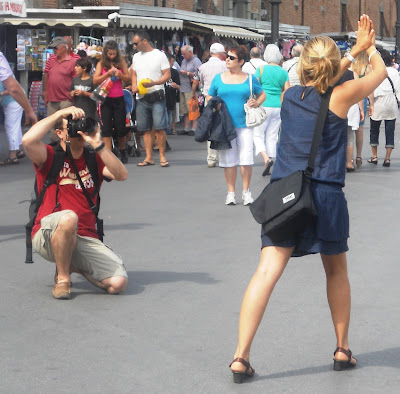 Tourists in Pisa enjoy posing as though they are trying to push the Leaning Tower back into place (Photograph: Patrick Comerford, 2012)

Everyone who comes to Pisa wants to be photographed in a pose as though they were trying to push the Leaning Tower back into place. But few stop to think about why it was built and why it tilts, and fewer still go on to admire the cathedral and the baptistery that share the same green piece of land.

The coach parked some distance away, and after a walk through back streets, the entrance through the old city walls to the Piazza del Duomo (Cathedral Square) or Piazza dei Miracoli (Square of Miracles), the wide, walled, partly-paved and partly-grassed area at the heart of the city.

After a quick, early morning coffee in the square, our first visit was to the “Leaning Tower” which was built originally as the campanile or bell tower for cathedral, which stands about 60 metres high.

Building began in 1173 and the bell-chamber was added only in 1372. But five years after building began, as work reached the third-floor level, sinking began due to the weak subsoil and the poor foundations. The building was left alone for a century, the subsoil stabilised and the building was saved from collapsing.

Building work resumed in 1272, and the upper floors were added, with one side taller than the other. The seventh and final floor was added in 1319. But by then the building was leaning one degree, or 80 cm from vertical. Today, the tower is leaning by about four degrees.

But at the heart of the piazza is Duomo or Cathedral of Santa Maria Assunta. This is a five-nave cathedral was built in 1064 by Buscheto, in the distinctive Pisan-Romanesque style. 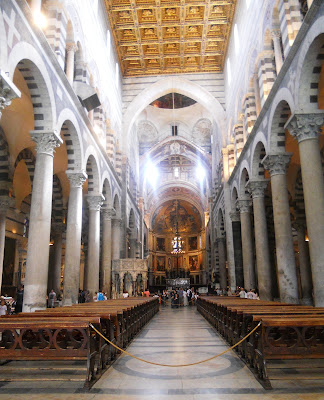 Inside the Duomo, where Galileo watched the swinging sanctuary lamp and developed his theory about the movement of a pendulum (Photograph: Patrick Comerford, 2012)

Pisa’s most famous son, Galileo Galilei is said to have formulated his theory about the movement of a pendulum by watching the swinging of the sanctuary lamp hanging in the cathedral nave.

From the cathedral we moved across to the Baptistry, which dates from 1153, but was completed in the 14th century, when the top storey and dome were added by Nicola and Giovanni Pisano. This is the largest baptistery in Italy, and is even a few centimetres higher than the Leaning Tower.

The Baptistry is also known for its acoustics, and we were treated to short singing demonstration of this by one of the guards before we left for lunch at the other end of the square.

In the afternoon, we visited Lucca, which was saved from bombing during World War II and so the city has been preserved within its walls which also remain intact. 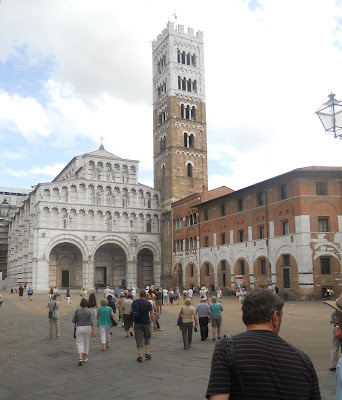 The open squares of Lucca ... a compact and attractive town that has remained intact (Photograph: Patrick Comerford, 2012)

Lucca was the birthplace of Puccini, and there is a bronze statue of the composer in the square close to the house where he was born. We walked through the squares of Lucca, with their statues of Garibaldi and links with Napoleon, and through the narrow streets and alleyways of this compact city, visiting the Church of San Michele, the duomo or Cattedrale di San Martino, and one or two other churches.

We stopped for a final coffee in a tiny square with a fountain and a 12th century church before heading back to Monecatini Terme for dinner.

Posted by Patrick Comerford at 18:56 No comments: