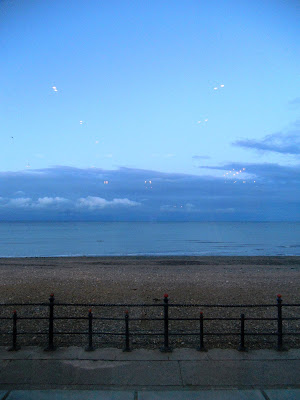 Looking out at the beach and the sea from the Beach House in Bray this evening (Patrick Comerford, 2012)

The bank holiday weekend is coming to an end but the Easter season is not over.

It seemed like a good idea to bring the weekend to a close this evening with a walk on the beach in Bray and diner in the Beach House.

There were grey clouds and a light rain when two of us arrived in Bray, and so after barely stepping onto the beach two of us went straight into the Beach House, where we were warmly welcomed and offered our choice between a table near the window or a “Beach Hut” looking out across the restaurant to the sea, with full window views.

Despite the grey feeling outside, the views were spectacular. The setting sun was being caught in sparkling glances on a small rock outcrop in the breaking waves and a few buoys a little further out. Traces of a rainbow appeared once or twice, only to disappear again each time. As the lights receded, the refraction in the windows added a blue hue to the skies and the water. 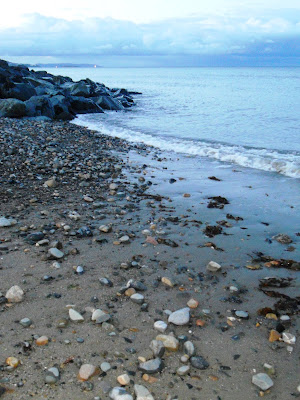 On the beach below the Beach House in Bray this evening (Photograph: Patrick Comerford, 2012)

Easter is such an appropriate time to think of the beauty of the contrast between darkness and light as the stones toll beneath my feet.
Posted by Patrick Comerford at 22:07 No comments: 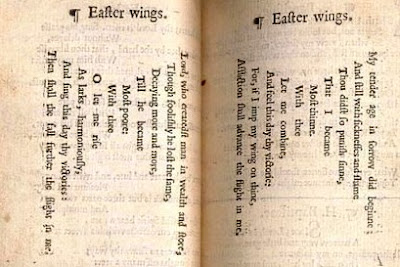 Our Easter celebrations continue today [Monday, 9 April 2012] and my choice of a Poem for Easter this morning is ‘Easter Wings’ by the 17th century poet and priest George Herbert (1593-1633). This is a pattern poem in which the work is not only meant to be read, but its shape is meant to be appreciated by the reader. In this case, when the poem was first published in 1633, it was printed on two pages of a book, sideways, so that the lines suggest two birds flying upwards, with their wings spread out.

Herbert is using a form of poetry called carmen figuration, manipulating the overall shape of the poem to mimic its subject. In this way, he shapes both stanzas to look like wings when the poem is turned sideways, representing the ultimate flight of humanity when Christ claim his followers.

This style of writing poems with shapes that mirror their theme was adopted from the ancient Greeks and was popular when Herbert was writing in the early 17th century, with many poets adopting similar styles and forms of writing.

The shape of the poem represents a dying or falling, then rising pattern, which is the theme of the Easter story. The top half of each stanza focuses on the problems caused by human sin, while the bottom half reflects the hope made possible by Christ’s Resurrection at Easter. The wings may evoke also the angels present atin the empty tomb on that first Easter morning (John 20: 12).

But Herbert also adopts other styles in this poem about the fall of humanity and the Resurrection of Christ. He uses capitalisation at the beginning of each line and punctuation at the end of most lines in ‘Easter Wings,’ so that each line stands on its own with a capital letter at the beginning. This method of form, together with hard punctuation, gives each line more stress. In this way, Herbert gains the reader’s attention and invites us to consider the importance of each single line.

Lord, who createdst man in wealth and store,
Though foolishly he lost the same

urging us to see the significance not only to see the creation and fall of humanity by reading the lines together, but also to see the importance and truth of each line when it is read alone.

In this way, he invites us to see that “flight” cannot be accomplished without first “falling.”

Stanza 1 traces the decline of humanity. After their creation, Adam and Eve experience the wealth of God’s provision for them in the Garden of Eden, but they disobey God, eating the fruit of the forbidden tree. Expelled from the garden and alienated from God, they and their descendants are condemned to poverty and wretchedness. Rather than believing that humanity grows better and better through the centuries, Herbert reflects the view that humanity has enormous potential that has been wasted by turning away from God.

But there is hope. In the rising part of the stanza, Herbert talks of himself rising with Christ, like a lark that soars and sings in the spring, close to Eastertide.

The alliteration of “the fall further the flight in me” reinforces the paradox of the felix culpa or “happy fault” that teaches the fall of humankind actually had a positive outcome because it results in the coming of Christ to bring humanity into a new relationship with God. Herbert is now applying this hope to himself.

Stanza 2 is parallel in its form. It picks up a number of words and phrases from Stanza 1, and is more specifically autobiographical.

This second part becomes a prayer that his previous suffering may help the poet to fly even higher. “Imp” is a technical term in falconry, meaning to graft feathers on to a damaged wing to restore a bird’s power of flight. Herbert is asking to become one with Christ’s rising from the dead into new life and to soar towards heaven with him. He may have in mind two passages from the Bible, Isaiah 40: 31 and Malachi 4: 2, that link the idea of flight and the experience of God’s healing and renewal.

In the last lines of the poem (lines 17-20), Herbert expresses his view that humanity will eventually fly away with Christ:

Let me combine
And feel this day thy victorie:
For, if I imp my wing on thine
Affliction shall advance the flight in me.

In these closing lines, Herbert tells us that if humanity “flies” on the same path as Christ, then our ultimate victory will be to fly up to where Christ dwells. 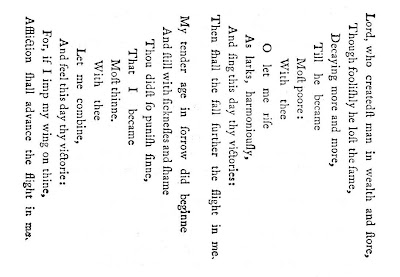 Lord, who createdst man in wealth and store,
Though foolishly he lost the same,
Decaying more and more,
Till he became
Most poore:
With thee
Oh let me rise
As larks, harmoniously,
And sing this day thy victories:
Then shall the fall further the flight in me.

My tender age in sorrow did beginne:
And still with sicknesses and shame
Thou didst so punish sinne,
That I became
Most thinne.
With thee
Let me combine
And feel this day thy victorie:
For, if I imp my wing on thine
Affliction shall advance the flight in me.