I often wonder who decides on the Irish names of inner city streets in Dublin. Sometimes I think they render the street names into Irish with a distorted sense of humour; sometimes I wonder if they have idea at all of what they are doing; and sometimes I think they simply want to destroy and eliminate collective memory and a communal sense of identity.

The Czech writer, Milan Kundera, in The Book of Laughter and Forgetting, offers a series of reflections on the importance of memory as the root from which individuals and groups begin to shape the self-understanding of their identities.

In an essay in this book, Kundera analyses the writings of Franz Kafka and comments:

Prague in his novels is a city without memory. It has even forgotten its name. Nobody there remembers anything, nobody recalls anything … No song is capable of uniting the city’s present with its past by recalling the moments of its birth.

In his essay, Milan Kundera explores this theme in relation to the way in which the state authorities tried to change the awareness of the identity of the Czech people since the end of World War II. An attempt has been made to erase the nation’s memory, and through this the identity of the people has been eroded.

As Kundera notes, when he quotes his friend Milan Hubi:

The first step in liquidating a people is to erase its memory.

The culture, traditions, songs, religious commitment, political ideas embodied in the literature and the poetry of the community are important vehicles communicating and challenging the identity of the society.

Street names in our cities and towns, like our family names, are a way of passing on and inheriting identity and memory. As a schoolboy in the 1960s, I deeply resented the efforts of misguided teachers who, in the fervour leading up to marking the golden jubilee of the 1916 Rising, tried to render my name into Irish.

Patrick is a perfectly good name on its own. It is the name I was baptised with, and so I like to imagine it is the name God knows me by. Why would someone want to render it as “Padraig” or “Padriac”? Perhaps they thought Saint Patrick was from England, and that Patrick is an English name – even though he was born long before the arrival of the Anglo-Normans.

As for Comerford, there were too many aggressive efforts to render it as “de Comartún” or even the ludicrous “O Comartún” or convoluted but simply wrong “Mac Cumascaigh.” What was wrong with Comerford, in their eyes, of course, is that it is derived from the name of an English village. A pretty village, and a delightful place, but those self-appointed patriots knew from the sound of my name that it was an English village, no matter how long the Comerford family was living in Ireland.

“Saints alive!” you may respond. But it even happens to saints.

Now that we are coming up to the centenary of the 1916 Rising, the greening of names is plaguing us again … most visibly in the green street names around the city centre in Dublin.

There the street sign told me in English that I was standing on “Werburgh Street” (not Saint Werburgh Street), and in Irish it told me I was on Sr[aid] Barbra [sic]. Obviously, whoever was charged with this translation thought poor Saint Werburgh was too English. But the same benighted translator did not know how to spell Barbara … perhaps he had Barbra Streisand in mind.

Some years ago, I wrote about neighbouring Upper Exchange Street, off Lord Edward Street, which apparently is in both Dublin 2 and Dublin 8, and which has been rendered in Irish on one sign as Sráid an Mhalartáin Uachtarach, or Street of the Upper Exchange – did no-one know how to translate it into Upper Street of the Exchange, or did they think there were two exchanges? And then, at the corner of Lord Edward Street, opposite the former Royal Exchange, the same people have translated Upper Exchange Street as Sráid Iosóilde Uacht or Upper Isolde Street.

I have often taken services and preached on Sundays in Saint Werburgh’s Church, which is one of the churches in the Christ Church Cathedral group of parishes. It is one of the oldest churches in Dublin, dating back to 1178, when a church was built on this site shortly after the arrival of the Anglo-Normans in Dublin.

The church is named after Saint Werburgh, the Abbess of Ely and patron saint of Chester. She died in 699 AD, and the church in Dublin is first mentioned in a letter of Pope Alexander III dated 1179. However, the parish dates back much further than the Anglo-Norman foundation. In Viking Dublin, the parish church was named after Saint Martin of Tours, and the church stood near the south end of Werburgh Street.

In the 18th century, Saint Werburgh’s became a fashionable city centre church, attended by the Lord Lieutenant and his entourage, and with a reserved Viceregal pew. Saint Werburgh’s was the Chapel Royal attached to Dublin Castle, and the Viceroys were sworn into office there and seats were reserved for the officers and soldiers of Dublin Castle until 1888.

The self-appointed patriots who want to wipe out the memory of Saint Werburgh in the Irish language ought to remind themselves that Lord Edward FitzGerald, one of the leaders of the 1798 Rising, is buried in that church in a vault that was reserved for the Rectors of Saint Werburgh’s. 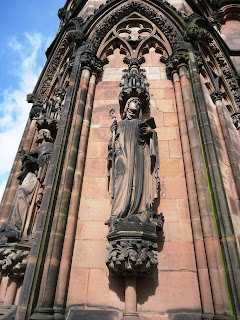 Saint Werburgh was a Staffordshire saint, the daughter of King Wulphere of Mercia. She was trained at home by Saint Chad, the founding saint of Lichfield Cathedral. Of course, while Saint Chad came from an Anglo-Saxon background, he too had Irish connections: he received his early training under Saint Aidan at Lindisfarne and later spent some time in a monastery in Ireland.

Later, Werburgh became a nun in the Abbey of Ely, where the abbess was her aunt, Saint Etheldreda. She became the Abbess of Ely before she died in the seventh century. She was buried at Hanbury in Staffordshire, but her body was later reburied at the Saxon Church of Saint Peter and Saint Paul, which was rededicated to Saint Werburgh and Saint Oswald in 907 and eventually became Chester Cathedral.

Monks from Chester or perhaps Bristol later brought the cult of Saint Werburgh to Ireland, and Saint Werburgh’s Church in Dublin was first built in 1178. 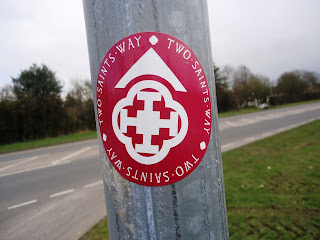 The Two Saints’ Way … makers along the road at Cross in Hand Lane (Photograph: Patrick Comerford)

The Two Saints’ Way is a project to recreate a pilgrim way linking the shrines of Saint Chad in Lichfield and Saint Werburgh in Chester. This pilgrim way gives its name to Cross in Hand Lane in Lichfield, where I stay regularly at the Hedgehog on the corner with Stafford Road.

The project owes everything to David Pott, an experienced long distance walker. At an early stage, his dream was of a pilgrimage trail from Stafford over Cannock Chase along the Heart of England Way to Lichfield Cathedral and the shrine of Saint Chad.

The discovery of the Staffordshire Hoard six years ago brought a new interest in Mercian heritage, attracting support from people with links with Staffordshire University, British Waterways, local tourist boards, and the cathedrals in Chester and Lichfield.

Saint Weburgh is one of the many saints carved on the west front of Lichfield Cathedral. If Lichfield, Chester and Ely can remember her, why can she not be remembered – and celebrated – in the street names of Dublin?

Yes, it was all enough to make a saint blush. All in a weekend that was disappointing for any fans or followers of the Irish cricket and rugby teams.

And so, after admiring Barry Sheehan’s new installation in the gardens of Dublin Castle and visiting a new design exhibition in the Coach House, two of us went out to Malahide to clear our heads and walk along the beach on a cold grey afternoon, enjoying the views back to the Marina and across Broadmeadow Estuary to the sandy end of the peninsula at Donabate.

Despite the strong currents, it was dangerously tempting to think it would be possible to wade or swim across on sunnier days. But I knew no saints would come to my rescue.

We drove back through Portmarnock, Sutton and Clontarf to the city centre, where there were countless tourists dressed in those green hats with attached red beards.

The Saint Patrick’s Day celebrations are already under way. But who will remember where he came from? Who remembers Saint Werburgh? And who remembers that Saint Barbara was a very different woman, from Nicomedia in present-day Turkey or Heliopolis of Phoenicia, in present-day Lebanon? 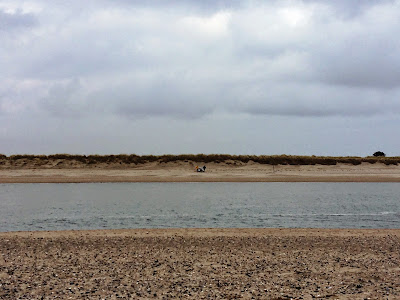 Looking across Broadmeadow Estuary from Malahide to the tip of the Donabate Peninsula (Photograph: Patrick Comerford, 2015)

Through Lent with Vaughan Williams
(26): ‘Virgin born, we bow before thee’ 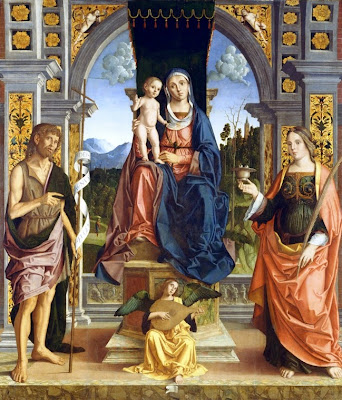 Marco Palmezzano, ‘The Virgin and Child Enthroned, with Saints John the Baptist and Lucy’ (1513), the National Galley of Ireland … an image for Mothering Sunday

The Fourth Sunday in Lent is also known as Laetare Sunday because of the incipit of the traditional Introit: Laetare Jerusalem, “O be joyful, Jerusalem” (Isaiah 66: 10, Masoretic text).

This hymn is found in both the New English Hymnal (187) and the Irish Church Hymnal (No 185). It is addressed to Christ, but praises his mother, the Virgin Mary.

In the New English Hymnal, this hymn is set to the melody Mon dieu, prête moi l’orielle by Louis Bourgeois (ca 1510-1561) in the French Psalter of 1542 (Psalm 86), and harmonised for the English Hymnal in 1906 by Vaughan Williams. However, this tune is the only second choice of setting for this hymn in the Irish Church Hymnal.

The same tune was also used by Gustav Holst in 1920 as the basis for his setting of Psalm 86 for chorus, string orchestra and organ.

Louis Bourgeois was the choirmaster of Saint Peter’s Church, Geneva. Under the patronage of the Reformer John Calvin, he was the music editor of successive versions of the Geneva Psalter from 1542 to 1551.

Heber wrote this hymn with the Third Sunday in Lent in mind, with lines 2 and 5 of Stanza 1 (“blessed was the womb that bore thee”) echoing the closing words of the Gospel reading originally appointed for that Sunday in The Book of Common Prayer: “Blessed is the womb that bare thee, and the paps which thou hast sucked” (Luke 11: 27).

Today, this hymn is often used on the Feast of the Presentation (2 February), the Feast of the Annunciation (25 March), and Christmas Day (25 December), as well as being suitable for singing on Mothering Sunday.

Blessèd she by all creation,
Who brought forth the world’s salvation,
And blessèd they, for ever blest,
Who love thee most and serve thee best.
Virgin-born, we bow before thee;
Blessèd was the womb that bore thee;
Mary, Mother meek and mild,
Blessèd was she in her Child.

Tomorrow: ‘Firmly I believe and truly’