Cheery encouragement on the beaches in Skerries 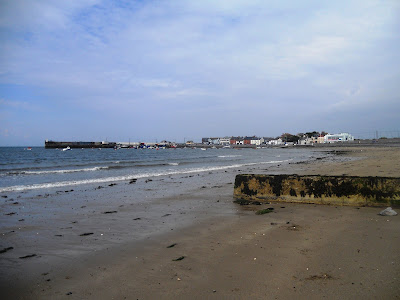 The North Strand at Skerries this afternoon, looking back towards the Sailing Club and the Harbour (Photograph: Patrick Comerford,2012)

It is a week since I was on the white sands of the beach in Rethymnon in Crete, swimming in the blue Mediterranean waters, under blue skies and in temperatures in the mid-30s.

Although I have flown over the coastlines of Dublin and Wicklow quite a lot of times in recent weeks in my journeys to England and Greece, it is three weeks since I was on an Irish beach, on a grey day in Greystones, Co Wicklow [23 June 2012], and almost two months since I walked on the beaches of Portrane and Skerries [4 May 2012].

This afternoon three of us visited my Lynders cousins in Portrane with goods for next month’s Heart-to-Hand sale in aid of projects in Albania and Romania [4-6 August 2012].

This is supposed to be the height of summer. But it was a grey day today, skies were grey, the water was grey and the beaches of Portrane looked lonely and abandoned, and although the tide was out the sea waters were choppy.

The cough and chest irritation that are part of the symptoms of my sarcoidosis have been playing up in recent days – perhaps a negative reaction to the weather – and I needed the cheery encouragement of a walk on a long stretch of sand by the sea.

Later, two of us continued through Lusk and Rush and along the coast road to Skerries, for coffee in the Olive on Strand Street and a light late lunch of cheese, bread, olive oil, sun-dried tomatoes, rocket and grapes. 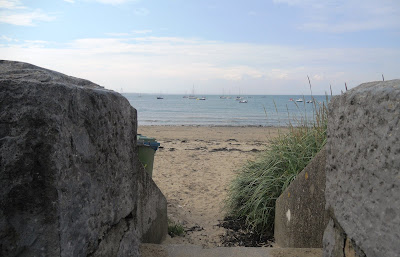 The Harbour end of the North Strand in Skerries this afternoon (Photograph: Patrick Comerford,2012)

But despite the lack of summer weather, we could hardly resist the temptation to walk the beaches of Skerries. And as we stepped down onto the North Strand, was that a chink of sunlight breaking through the clouds?

The view across to Sailing Club was clear, and though no child or adult was brave or foolhardy enough to get into the water, one lone dog was revelling in his swim and enjoying the push of the breaking waves as they crashed in against him and against the shoreline. 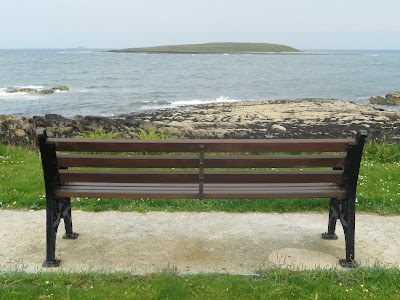 No-one was taking in the views from Red Island this afternoon (Photograph: Patrick Comerford,2012)

There was a small queue for ice creams outside ‘Storm in a Teacup’ at the Harbour, and some children in the playground, but up on Red Island no-one was sitting on the benches taking in the views from the headland across to the islands off Skerries.

Back down on the South Strand, the tide was beginning to come in, but there was a long, lonely stretch of sand in front of us, with only a handful of people taking a walk, and three or four people at the Holmpatrick end playing with a kite.

Back in Strand Street, it was a pleasant surprise when someone who has been reading this blog for over a year introduced himself to me outside the library. Feedback is always welcome, both negative and positive, but it is heartening on a grey day when someone who has been a reader for so long offers the hand of friendship and says encouraging things about what I have said about Skerries.

And yes, it was good to be back in Skerries again and to walk the beaches, despite the weather.

Posted by Patrick Comerford at 20:56 2 comments: