Listening to Bach as we
watch and wait in Advent 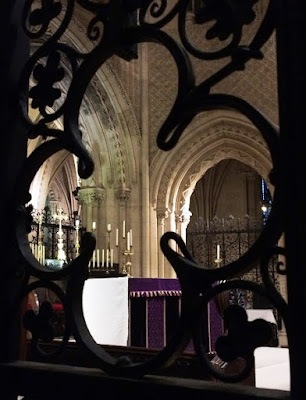 There is a beautiful expression of Advent as a time of preparation and waking in Bach’s cantata BWV 140, Wachet auf, ruft uns die Stimme (‘Awake, calls the voice to us’), also known as ‘Sleepers Wake,’ is a cantata written by Johann Sebastian Bach (1685-1750) in Leipzig.

This cantata has been described as one of Bach’s “most beautiful, most mature and, at the same time, most popular sacred cantatas.” As the Advent them runs through all the services in the chapel of the Church of Ireland Theological Institute, two students, Nigel Cairns and Danielle McCullagh, put together a YouTube version of this cantata for a Service of the Word this morning [3 December 2015]:

Bach has been described as “a Christian who lived with the Bible.” Besides being the baroque era's greatest organist and composer, and one of the most productive geniuses in the history of Western music, Bach was a theologian who regarded his work as theology.

On his manuscripts, Bach would write INJ (In Nomine Jesu, “In the name of Jesus”) or JJ (Jesu Juva, “Jesus Help Me”), and he ended his manuscripts with the initials SDG (Soli Deo Gloria, “Glory to God Alone”).

This cantata is regarded as one of his most mature and popular sacred cantatas. He composed this chorale cantata in Leipzig for the 27th Sunday after Trinity and it was first performed by Bach in Leipzig’s main church. Nikolaikirche. on 25 November 1731. This was the only time Bach performed this cantata.

The cantata is based on the Lutheran hymn in three stanzas Wachet auf, ruft uns die Stimme written in 1599 by Philipp Nicolai (1556–1608). We sang the translation of this hymn by FC Burkitt (1864–1935) as the Offertory Hymn in Christ Church Cathedral Dublin last Sunday [29 December 2015], when I was preaching at the Sung Eucharist.

Bach used movement 4 of the cantata as the basis for the first of his Schübler Chorales, BWV 645, which was the organ voluntary in the cathedral on Sunday after the Sung Eucharist as the choir and clergy processed out.

The 27th Sunday after Trinity only occurs when Easter is extremely early in the Church Calendar. The prescribed readings for that Sunday were I Thessalonians 5: 1-11, telling us to be prepared for the day of the Lord and the parable of the Ten Virgins (Matthew 25: 1–13). Nicolai’s hymn is based on that Gospel reading.

The text and tune of Nicolai’s hymn appears unchanged in movements 1, 4 and 7, while an unknown author supplied poetry for movements 2 and 3, 5 and 6, both a sequence of recitative and duet. The librettist refers to the love poetry of the Song of Songs, showing Christ as the bridegroom of the Soul.

Bach structured the cantata in seven movements, setting the first stanza as a chorale fantasia, the second (movement 4) in the style of a chorale prelude, and the third as a four-part chorale.

He set the new texts as dramatic recitatives and love-duets, similar to contemporary opera. Bach scored the work for three vocal soloists (soprano, tenor, bass), a four-part choir and a Baroque instrumental ensemble of horn (to enforce the soprano), two oboes, taille, violino piccolo, strings and basso continuo, including bassoon.

It has been said that music is theology’s alter ego, or even its better half.

Karl Barth once said that when the angels play for God they play Bach, although when they play for their own enjoyment they play Mozart. David Scaer, Professor of Systematic Theology and New Testament, and Editor of the Concordia Theological Quarterly at Concordia Theological Seminary, has described Bach as “an ocean in whose music we are drowned in God’s own majesty.”

Alfred Dürr describes this cantata as an expression of Christian mysticism in art. Today, Bach’s music continues to lift the heart and to energise the soul. This hymn and cantata are intimately associated with Advent and continue to be performed and sing in cathedrals, churches and college chapels in the early Sundays of Advent.

Waiting in Advent 2015
with Dietrich Bonhoeffer (5) 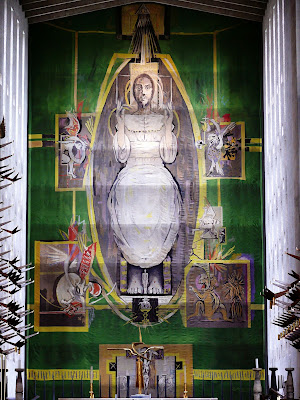 Advent began last Sunday [29 November 2015], and I have prepared my own Advent Calendar this year. Over the next few weeks, as we wait and prepare for Christmas, I invite you to join me each morning for a few, brief moments in reflecting on the meaning of Advent through the words of the great German theologian and martyr, Dietrich Bonhoeffer (1906-1945).

“When the old Christendom spoke of the coming again of the Lord Jesus, it always thought first of all of a great day of judgment. And as un-Christmas-like as this idea may appear to us, it comes from early Christianity and must be taken with utter seriousness … The coming of God is truly not only a joyous message, but is, first, frightful news for anyone with a conscience.”