Searching for Pugin and finding Obama 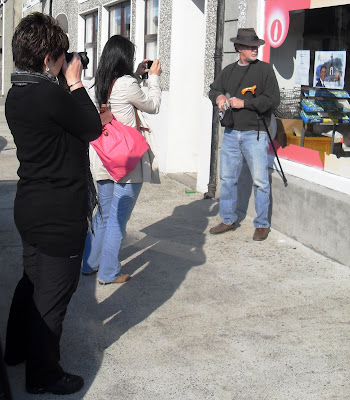 There was a full red moon rising above Moneygall as we passed by President Barack Obama’s ancestral village on the motorway last night.

Five of us – two Americans, one Greek and two Irish – spent a sunny day in Killarney and Adare, but on our way to the south-west from Dublin, we had an early morning stop in Moneygall on the borders of Offaly and Tipperary. The village is in Co Offaly, but the local GAA club has its grounds in Co Tipperary, and the whole place is in the North Tipperary constituency. I wonder are they going to ask President Obama which county he supports.

They’re painting the town to get it ready for next month’s visit – they may not be painting it red, but that’s the colour they’ve already painted the entrance to the GAA club, which plays in red and black. As we walked along the main street, men were up ladders and down on their knees, painting and scraping. 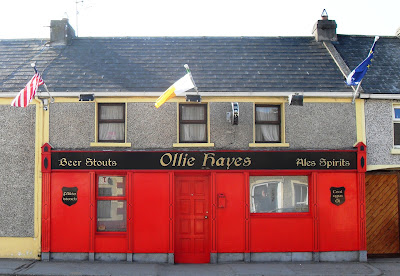 This is a place with a population of less than 300. But it has two pubs, five shops, a post office, a school, a church – and its very own exit from the M7, Junction 23.

The waking residents of Moneygall were almost outnumbered by the carload of us who arrived early yesterday. When they’re all awake they are certainly going to be outnumbered by President Obama’s entourage and security detail next month.

Apart from the flags fluttering outside Ollie Hayes’s pub, the friendly faces on the streets and the presidential photographs decorating the shop windows, there was little to keep us in Moneygall – no early morning coffee shop, no rest rooms for the three passengers cramped in the back seat, no souvenir stalls, and no cut-out look-a-likes to be photographed beside.

The next stop was Adare. For the real purpose of this journey was to show the three students the charm of Adare and Killarney while I caught up on some photographs of Pugin work that I had missed at the end of last year. 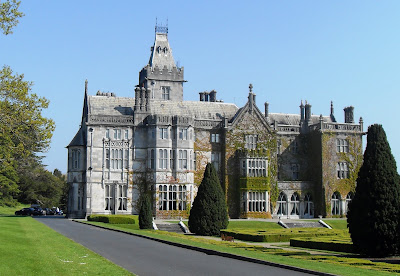 Adare Manor ... Pugin contributed to this Gothic extravaganza at the invitation of the Earls of Dunraven (Photograph: Patrick Comerford, 2011)

We stopped at Adare Manor in the warm sunshine, and then drove down to the village for coffee in the Adare Heritage Centre. We strolled through the main street, visiting Holy Trinity Church – probably the most beautiful Roman Catholic parish church in Ireland – and looking at the thatched cottages with their pretty, chocolate-box-style, flower-filled gardens. 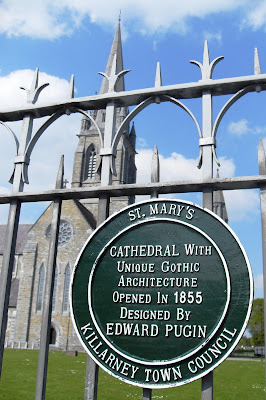 It took over an hour to get from Adare to Killarney. After sandwiches and more coffee and a stroll through the town, the five of us visited Saint Mary’s Cathedral early in the afternoon. It was disappointing to notice that the plaque outside the cathedral declares it is the work of Edward Pugin and not of his father, Augustus Welby Northmore Pugin. 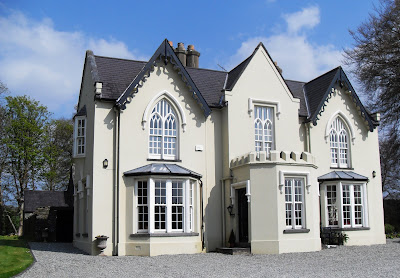 Then the other four headed off to drive around the Lakes of Killarney while I went to photograph Woodford House, which Adrian Hilliard has helped me to identify as one of the few examples of domestic architecture by AWN Pugin in Ireland.

Mary O’Connell was very welcoming as she pointed out how an earlier house, built in the 18th century by the Fitzgerald family, had been extended to the front by Pugin, at the invitation of the Earl of Kenmare. At the time, Pugin was working on Saint Mary’s Cathedral, and his work at Woodford House includes a Gothic-style window inserted above the stairs in the original house, and a Gothic-revival, three-bay facade added to the front of the house.

Back in Killarney, I photographed the inside of the church at the Franciscan Friary, and the Covent of Mercy on the corner of New Road, both Pugin works, and visited the former Presentation Convent beside the cathedral, only to be greeted with the sad news that nothing of the former Pugin chapel has been retained in recent rebuilding and refurbishing.

It was still sunny when I caught a taxi up to Kate Kearney’s Cottage to join the other four for a glass of wine. In the warm, late evening sunshine, I mused: was Kate Kearney related to President Obama’s Kearney ancestors in Moneygall?

On our way back to Dublin, the five of us stopped once again in Adare for dinner at the Blue Door, a restaurant in one of the traditional thatched cottages on the Main Street. It was dusk as we left, and the sun was setting behind Holy Trinity Church.

As we passed Moneygall once again on the M7, it was dark. We were listening to Bruckner’s Mass in E Minor and a red moon was rising over the village. By the time we got back to Dublin, the moon was full and yellow, and Monday had tuned into Tuesday.
Posted by Patrick Comerford at 10:53 1 comment: