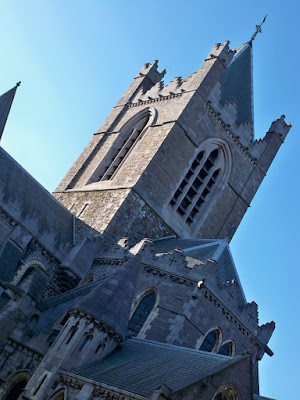 The General Synod of the Church of Ireland opened in Christ Church Cathedral, Dublin, this morning with a punchy and well-honed presidential address by Archbishop Alan Harper of Armagh, referring to the “state of the economy and the impact of serious recession on the lives and life chances of ordinary people.”

He referred to the Church of Ireland Council for Mission, and the objectives it set out last year:

• To provoke members of the Church of Ireland, at every level, to think what it means to be ‘mission-shaped’ in Ireland today…
• To facilitate the employment of new forms and patterns of ministry conducive to mission…
• To encourage local churches to think strategically about mission… and
• To enable already existing information to be used for mission purposes.

He spoke of the absolute priority of mission as the hallmark of the life of the Christian and the Christian Church. But he said “one of the pitfalls inherent in hiving off the mission agencies from the mainstream life of the Church is that we create a false dichotomy. We look upon mission as a special activity separate from normal church life and lose that outward looking orientation that properly belongs to the Church. The Church is not only holy and catholic; it is also commanded to be apostolic. Perhaps the mission agencies can help us restore the vision of apostolicity.”

He looked at three understandings of mission, from the Church Mission Society Ireland, the United Society for the Propagation of the Gospel (USPG) Ireland, and the Church Army.

CMS Ireland says it works “in partnership with the Church to share the Gospel throughout the world in word and deed …we are working to see our world transformed by the message and love of Christ.”

USPG Ireland says: “Mission begins and ends with the Triune God. It is God’s activity from creation until the coming together of all things in Christ. It is seen most clearly in the saving life, death and resurrection of Jesus. Through Scripture, Tradition, Reason and Experience, we see the Holy Spirit at work, calling, liberating and transforming the People of God. Communion is at the heart of God, the very life of the Trinity. God yearns to draw each one of us into this communion with him… Communion is God’s gift to the Church. We respond in worship, most of all when this communion is made real in the Eucharist… Communion is God’s will and desire for all humanity and the whole of creation. Mission is, therefore, ‘holistic’, responding to all of God’s liberating activity so that people may ‘grow spiritually, thrive physically, and have a voice in an unjust world’.

“It involves Evangelization, Pastoral Care, Education and Healthcare, the struggle for Justice and Peace, and the care of Creation (the five marks of mission identified by the Anglican Communion).”

The Church Army says it is “sharing faith through words and actions to transform lives by making Jesus famous. Our focus is on the 7 out of 10 people who have little or no meaningful contact with the church.”

Turning to the present climate in Ireland, he spoke of:

The challenge facing us is not to lament our circumstances but to transform them, he said. “The role of the Church, in good times and in bad, is to stand alongside those who are finding it hardest to cope, whatever their circumstances; to exhibit in practical and personal ways the loving concern of God for all people but especially for the vulnerable; and to be a beacon of hope to the living, for nothing is more spiritually, socially and physically restorative than love and hope.

He said the mission agencies show us that “mission begins when we meet people at their point of need: theology and doctrine come some way after compassion when it comes to introducing people to Christ.”

Turning to the “current circumstances of financial stringency,” he said “we are confronted with fresh challenges which require us once more to accommodate change.”

In terms of the global recession, he said “the consequences of recession are devastating for those forced into unemployment or faced with the collapse of their companies. I recently received a letter from a GP. He described what he encounters in his consulting rooms as a result of families stressed to the limit by pressure from their banks: decent folk, pillars of the local community, reduced to tears. That GP’s observations are more than supported by the statistics of suicide in both jurisdictions.”

And he graphically described the way things have changed in Irish society.

“The effects of the restriction in bank lending have been disastrous for small and medium-sized businesses, especially in the construction sector, and, consequently, for those made unemployed as businesses contract. Many employers have been forced to the wall; one long-established firm I know has laid off 60% of its workforce, others have ceased trading altogether; punitive rates of interest … are being demanded; banks are reducing overdraft facilities; asset rich but cash poor businesses, often described by the banks themselves as their core customers, are being starved of the cash required to enable them to trade, yet these same small and medium-sized businesses are the backbone of the local economy.” 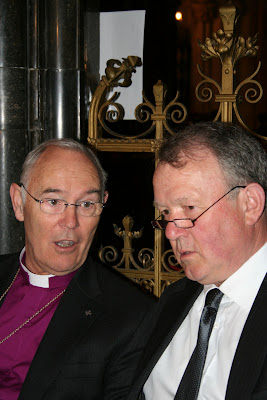 The strength of the capitalist system in collectivising the sharing of risk has become a weakness, he said. “Is it too late to turn back the clock and remove from working people and businesses – and indeed from the retail banking industry – the risk of the billion dollar gambles of the bond markets? If it is, other types of institutions must be created to return society generally and retail banking in particular to a less vulnerable place.”

He added: “We require a reassertion of the key understanding that the first obligation of the retail banks is to the customer and that the true interests of shareholders are best served by implementing customer satisfaction. Part of that banking obligation to the customer involves ensuring that credit is available to keep business alive for, without business, wealth creation ceases and employment collapses.”

Banks are a part of our social system and integral to the lives of ordinary people and the businesses where they work … Banks and financial institutions are not themselves wealth creators,” he said. “We need them to act morally, consistently and responsibly for the greater good of society. We need to be able to trust them, including trusting in their objectivity and reliability … “We cannot allow hard-working people to be driven to the point of suicide by institutions parts of which those same desperate and distraught people actually own.”

He suggested “the retail banking sector has been morally compromised by association with the culture of investment banking. Now, however, the majority shareholder is often the tax payer. In these circumstances it is not enough for the banks to indulge in the ruthless pursuit of profit on the premise of delivering shareholder value, leading them to invest heavily in what they hope will prove the more profitable investment arm. There is no shareholder value for the tax payer if banking policy puts people on the dole, causes significant loss of tax revenue, and inflates the cost of the social security system. We require a completely new banking morality that takes full account of the social obligations of financial institutions and that insulates ordinary people and businesses from exposure to the risks of investment banking.” 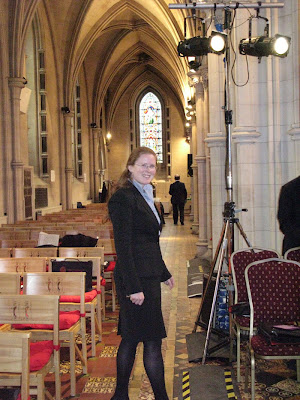 Sarah Drumm of Christ Church Cathedral at the opening of the General Synod today (Photograph: Church of Ireland Press Office)

This afternoon, the General Synod passed a resolution unreservedly supporting the Transferor Representatives’ Council in seeking the continuation of the rights given to the Church of Ireland, Presbyterian Church and Methodist Church and “the right to appoint governors to those transferred schools.”

Speaking on the report of the Board of Education, Canon John McKegney (Armagh) said the legislation to create a new Educations and Skills Authority could remove church representation as of right.

“We are not asking to run controlled schools, simply to be a rightful partner,” he said. “We also wish to ensure that schools that the majority of our children attend have an ethos which reflects Christian faith and values.”

During the debate, Mr Dermot O’Callaghan quoted graphically from material on gay lesbian and transsexual issues. He was asked by the Archbishop of Armagh to justify the relevance of his quotations and eventually was asked to finish up in 30 seconds.

The Revd Grace Clunie (Armagh) said she was appalled to hear what Mr O’Callaghan had said. She described it as an “affront to my sacredness as a woman and to many of my friends who are gay and lesbian.” She also regretted that Changing Attitudes Ireland had been refused a stall at the synod for a second year, and said another voice needs to be heard.
Posted by Patrick Comerford at 16:53 1 comment: