An afternoon around the Blessington Lakes 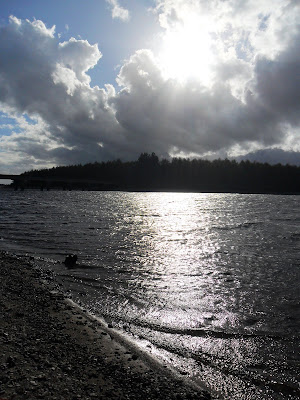 Late this afternoon, I headed up into the Wicklow Mountains to spend an hour or two around the Blessington Lakes.

The lakes cover an area of 5,000 and were formed almost 60 years ago when the Poulaphouca Dam and hydroelectric station were built and this part of the Liffey valley was flooded in 1940 to create a reservoir for Dublin and to drive the power station.

It has been a bright spring day, but the lakes were quite. In a few weeks time, I imagine, they are going to be busy with fishing, sailing, windsurfing, boating, cruising and canoeing.

Blessington House was built in 1673,a new parish was formed in 1676 with the union of Ballymore, Cotlandstown, Yagoe, Tipperkevin, Burgage and Boystown, and Saint Mary’s Church was consecrated in 1683.

Archbishop Boyle went to become Archbishop of Dublin. When he died in 1702, Blessington was inherited by his son, Murrough Boyle, who became 1st Viscount Blessington and Baron Boyle. The estates eventually passed through the Stewart and Dubar families to Wills Hill of Hillsborough, Co Down. The Hill family, who held the title of Marquis of Downshire, continued to hold the Blessington estate until 1908. It is sad to see the Downshire House Hotel has been closed for time, although it is now being used as a gallery.

From Blessington, we headed out to have a look at Avon Rí, a new corporate and leisure resort looking out over the lakes. By now it looked as though it might rain; otherwise we might have stopped for coffee or a drink on the lakeside terrace at Il Lago Restaurant with stunning views from a decked balcony.

The shore-side ruins at Burgage, near Blessington (Photograph: Patrick Comerford, 2011)
Out on the lake shores we stopped to look across at the gaunt ruins of the castle and church at Burgage. They were already in ruins when the valley was flooded, and all that remains today of the once wealthy pre-Norman ecclesiastical site of Burgage More are the slowly collapsing tower house and some fragments of the church. This place formed a borough in the 13th century but was abandoned by in the early 14th century.

We also drove up to Tulfarris, a restored 18th century manor house which is now an hotel, leisure and golf resort with spectacular views across Blessington Lakes and the Wicklow Mountains. Once again, we were tempted to stop for coffee in the Elk Bar or the Lime Tree Restaurant, with their panoramic views of the lakes and the mountains. But people were arriving in large numbers of for a wedding reception.

Instead, we headed on through Valleymount and Ballyknockan, before turning back into Blessington.

The sandy shoreline of the Blessington Lakes ... almost like taking a walk on a beach (Photograph: Patrick Comerford, 2011)
The clouds blocked any views across Dublin as we descended through Brittas, but the threatened rain never fell until we reached Tallaght. By then, we had two hours of delight and pleasure.

Posted by Patrick Comerford at 20:07 No comments: