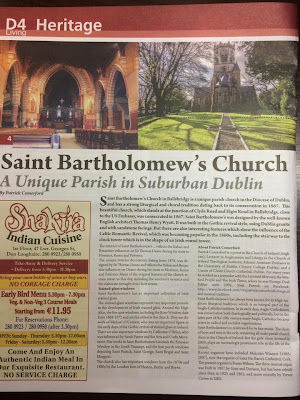 This feature is published in the current edition of the local magazine D4 Living (October 2014), on the Heritage page (page 4):

Saint Bartholomew’s Church in Ballsbridge is a unique parish church in the Diocese of Dublin, and has a strong liturgical and choral tradition dating back to its consecration in 1867.

This beautiful church, which stands at the junction of Clyde Road and Elgin Road in Ballsbridge, close to the US Embassy, was consecrated in 1867. Saint Bartholomew’s was designed by the well-known English architect Thomas Henry Wyatt. It was built in the Gothic revival style, using Dublin granite and with sandstone facings. But there are also interesting features which show the influence of the Celtic Romantic Revival, which was becoming popular in the 1860s, including the stairway to the clock tower which is in the shape of an Irish round tower.

The interior of Saint Bartholomew’s reflects the Italian and Byzantine influences on Sir Thomas Deane during his visits to Florence, Rome and Palermo.

The unique interior decoration, dating from 1878, was designed by Sir Thomas Deane and reflects the Italian and Byzantine influences on Deane during his visits to Florence, Rome and Palermo. Many of the original features of the church remain intact to this day, including the sanctuary mosaics and the elaborate wrought-iron choir screen.

Saint Bartholomew’s has an important collection of Irish stained glass.

The stained-glass windows represent two important periods in the development of Irish stained glass. Around the High Altar, the five apse windows, including the Rose Window, date from 1868-1872 and are the oldest in the church. They are the work of Michael O’Connor, who was an important figure in the early days of the Gothic revival of stained glass in Ireland.

There are also important windows by Catherine O’Brien, who was influenced by Sarah Purser and the Arts and Crafts Movement. Her works in Saint Bartholomew’s include the Emmaus Window in the South Transept, and the four porch windows depicting Saint Patrick, Saint George, Saint Brigid and Saint Margaret.

The church also has important windows from the 1870s and 1880s by the London firm of Heaton, Butler and Bayne.

Saint Bartholomew’s has always been known for its High Anglican liturgical tradition, which is an integral part of the Anglo-Catholic tradition. In its early days, Anglo-Catholicism was conservative both theologically and politically, but in the latter part of the 19th century many Anglo-Catholics became active in radical and socialist organisations.

Saint Bartholomew’s is celebrated for its fine music. The choir of boys and men is the only remaining all-male parish church choir in the Church of Ireland. But the girls’ choir, formed in 2003, plays an increasingly prominent role in the life of the church.

Recent organists have included Malcolm Wisener (1985-2007), now the organist of Saint Fin Barre’s Cathedral, Cork. The present organist is Fraser Wilson. The three-manual organ was built in 1887 by Gray and Davison, but has been rebuilt since then in 1925 and 1963, and more recently by Trevor Crowe in 2002.