‘The voice of the hidden waterfall’

‘in the stillness/Between two waves of the sea’ ... waves on the beach at Bettystown, Co Meath, this weekend (Photograph: Patrick Comerford, 2011)

On Easter Monday, 29 March 1630, a Puritan leader, John Winthrop, sailed from England for the New World, “with a great company of religious people,” on the Arbella. They had only been to sea for a short time when their flagship was rocked by the waves in a storm that set their spiritual and worldly course.

The Arbella eventually arrived safely, with its crew and passengers, at Salem, Massachusetts, in June 1630, and its passengers disembarked to begin their great mission, establishing a pioneering plantation of faith and fellowship, their holy “city upon a hill.” Among the new settlers was Isaac Stearns, who later settled in Watertown, and who throughout his life would constantly recall God’s “favour and blessing.”

A generation later, in the late 1660s, Andrew Eliott emigrated from East Coker in Somerset, sailing to Salem in Massachusetts, and later settling in Beverly. Both men were the direct ancestors of Thomas Stearns Eliot, the poet TS Eliot, who, from childhood, regularly returned to New England each summer, revelling in the sights and sounds of the sea.

And so the poet’s formative years were influenced by the open, haunting call of the sea on the north shore of Massachusetts, which continued to influence his work long after he had crossed that sea, back to his deepest ancestral roots, becoming England’s own great Nobel Prize winning poet.

As we climbed a path above Loughshinny beach yesterday and came across a hidden waterfall, I was reminded how Eliot concludes his poem Little Gidding (1942), the last of his Four Quartets, with his deep thoughts about the spiritual refreshment to be found in water, in rivers and in the sea: 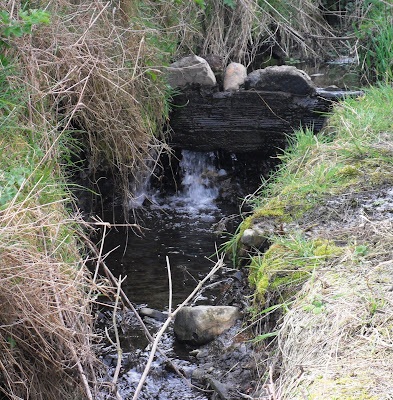 ‘The voice of the hidden waterfall’ ... above the beach at Loughshinny, Co Dublin, yesterday (Photograph: Patrick Comerford, 2011)

These are rich images that draw beautifully on Saint John’s closing vision in the Book of Revelation (Chapter 22) of the New Jerusalem, in which the River of the Water of Life, bright as crystal, flows through the middle of the great street of the city from the throne of God and of the Lamb. The tree of life grows in the middle of this street and on either side, or in the middle of the street and on either side of the river. The tree bears twelve kinds of fruit, producing this fruit every month (Revelation 22: 1-2).

According to Saint John, “the leaves of the tree were for the healing of the nations” (Revelation 22: 3).

Surrounded by the Aegean waters in his lonely exile on Patmos, Saint John, more than any of the four Gospel writers, draws constantly on water for his images of God, of God’s action in the world, of Christ’s bounty and generosity, and of the Kingdom of God. It is as if he is drawing from a deep well for his inspiration.

But we take water for granted in this country. We use it freely. We baulk at any efforts to charge us for it in restaurants. I can imagine that the great political battle in a few years to come may not be over the cost of recapitalising the banks but on the follow-up to introducing water charges.

Already the world is suffering from a scarcity of water. Those who analyse future security risks point to the danger of wars in the future in the Middle East caused not by militant Islam, nor by militant Zionism, but by competition for access to the waters of the Nile, the Jordan and the rivers of Mesopotamia, the Euphrates and the Tigris.

We take water for granted at the moment in Ireland. But last winter’s water crisis was created precisely because we take water for granted. It was not caused by us using too much water, but by us wasting too much water, mainly through not maintaining the pipes that bring water from our lakes and rivers to our homes, factories, offices and schools.

If this problem is not addressed, and water charges are introduced, then we can be sure, that like all taxation, those charges will rise steadily, drip-drip-drip, that people will be cut off, that major health problems will arise, and that eventually – as so often happens – there will be pressures to privatise the water supplies. When that then happens, profit, not health and cleanliness, will quickly become the primary motive for supplying water.

At present, this may appear to be a prospect so dismal that it is almost a fantasy of Orwellian dimensions. But it can come about through our own complacency, our own carelessness, the way we continue to think that water … well … that water is going to continue flowing freely, in saecula saeculorum.

In The Waste Land, Eliot warns us to “fear death by water,” and tells how:

Phlebas the Phoenician, a fortnight dead,
Forgot the cry of gulls, and the deep sea swell
And the profit and loss.
A current under sea
Picked his bones in whispers. As he rose and fell
He passes the stages of his age and youth
Entering the whirlpool.
Gentile or Jew
O you who turn the wheel and look windward,
Consider Phlebas, who was once handsome and tall as you.

To quote again from T.S. Eliot, he writes in the The Dry Salvages (1941), the third of the Four Quartets:

I do not know much about gods; but I think that the river
Is a strong brown god — sullen, untamed and intractable,
Patient to some degree, at first recognised as a frontier;
Useful, untrustworthy, as a conveyor of commerce;
Then only a problem confronting the builder of bridges.
The problem once solved, the brown god is almost forgotten
By the dwellers in cities — ever, however, implacable.
Keeping his seasons and rages, destroyer, reminder
Of what men choose to forget...

But so often we forget about water in our cities until it becomes a problem. And then, when the problem goes, we forget about the way in which water is the first and the last of God’s great blessings in nature, immediately after creation itself.

● Creation comes on the first day, in the story in Genesis, and life begins to have possibilities and to take shape on the second day, when God separates the waters.
● The slaves are led from captvity to freedom and promise through the waters of the Red Sea.
● The exiles weep and dream of promise by the waters of Babylon.
● In the waters of the Jordan, Christ is revealed as the Beloved Son, and the Spirit hovers above the new creation.
● Water flows from the side of the Crucified Christ.
● The waters of Baptism incorporate us into the Body of Christ.
● And then, God’s creation reaches the climax of its potential, its potential beauty, with that image in Revelation of the City of God with the River of Life running through its centre.

Too often we see water as a problem – rivers to be bridged, tsunamis to clean up after, storms to clear up from, leaky roofs, dripping drains, flooded fields, stormy shores, barren deserts when water fails ...

The Samaritan Woman at the Well ... a modern icon in the Orthodox tradition

In our Gospel reading this afternoon, Jesus shares water with a woman who is an outsider in so many ways. Sharing water with her, he tells her she is not an outsider, she is accepted by God, she is truly called into the Kingdom of God.

Lord, give me this water, so that I may never be thirsty, Amen.

Canon Patrick Comerford is Director of Spiritual Formation, the Church of Ireland Theological Institute, and a canon of Christ Church Cathedral, Dublin. This sermon was preached at the 3Rock Churches (ECO Congregation) Ecumenical Service in Whitechurch Parish, Rathfarnham, Dublin, on Sunday 27 March 2011.
Posted by Patrick Comerford at 15:30 No comments: