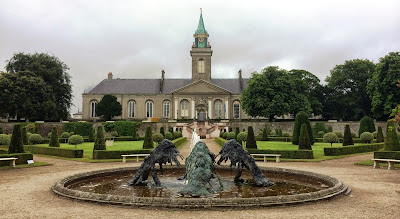 The Royal Hospital Kilmainham is one of the finest 17th-century buildings in Ireland and one of the first classical buildings on a grand scale (Photograph: Patrick Comerford, 2014)

I finished work early in the afternoon, but the rain was beginning to come down after a week of sunshine and so, instead of going for a walk on a beach, two of us crossed the south Dublin suburbs for a late lunch in the restaurant at the Irish Museum of Modern Art in the Royal Hospital Kilmainham.

I was last here in September 2012 for a concert by Leonard Cohen. That concert continued into the night, so this was first time in many years I had an opportunity to walk around the Royal Hospital Kilmainham in daylight, despite the afternoon rain.

The hospital was built in 1684 for King Charles II’s Lord Lieutenant of Ireland, James Butler, 1st Duke of Ormonde, whose principal residence was at Kilkenny Castle.

It was planned as a home for retired soldiers and continued as such for over 250 years. It predates the Royal Hospital Chelsea in London, which is similar in style but was completed two years later.

The Royal Hospital Kilmainham was designed by Sir William Robinson, along lines suggested by Sir Christopher Wren. But the style was inspired by Les Invalides in Paris, then recently opened as Louis XIV’s home for his army pensioners.

Robinson was the State Surveyor General, and his surviving buildings in Ireland include Marsh’s Library, near Saint Patrick’s Cathedral, Dublin, and Charles Fort in Kinsale, Co Cork.

The priory, which had been previously a hospital for the sick and infirm, became an asylum for guests and strangers, and the priors sat as barons in the Irish House of Lords, some of them holding the offices of Lord Cchancellor and Lord Deputy of Ireland. The priory closed with the Dissolution of the Monasteries in the 1530s.

In 1557, Sir Oswald Massingberd was appointed Prior by the Papal Legate, Cardinal Pole, and he was confirmed in the former possessions of the priory by Queen Mary. However, he left Ireland quietly when Queen Elizabeth succeeded her half-sister.

The priory buildings were spacious and elegant and for more than a century after its dissolution the the priory was frequently used as the residence of the Lord Deputy.

In 1675, Arthur Forbes, Earl of Granard and Marshal of the Garrisons of Ireland, proposed to the Lord-Lieutenant, the Earl of Essex, the foundation of a hospital or retirement home for disabled and pensioned soldiers.

In 1679, Ormonde obtained a charter from King Charles for the Royal Hospital in Kilmainham, secured 64 acres beside to the site of the priory and other lands that were part of the Phoenix Park for the planned hospital. 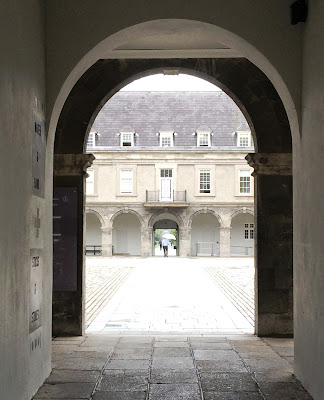 The Duke of Ormonde planned the Royal Hospital on a grand scale, classical in layout and continental in style (Photograph: Patrick Comerford, 2014)

Ormonde wanted the Royal Hospital to be on a grand scale, classical in layout and continental in style. He needed a home for his pensioner soldiers but equally he wanted a building of distinction that would mark the starting point of Dublin’s development as a city of European standing. He laid the foundation stone in 1680 and the building was completed within three years, at a cost of £23,559.

As Christine Casey notes, the impact of this classical building on what was still a mediaeval city must have been enormous: “It was such a sight that in 1684 a rule was introduced forbidding residents to accept gratuities from visitors who came to see it.” 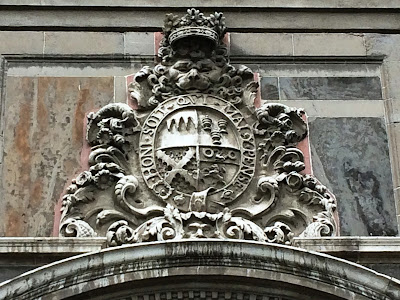 The Duke of Ormonde’s coat-of-arms above the pediment on the north face of the Royal Hospital Kilmainham (Photograph: Patrick Comerford, 2014)

The building comprises a North Wing containing the Master’s Quarters, the Great Hall, the Chapel and the Vaulted Cellar with the 19th-century kitchen and the South, East and West Wings that provided accommodation for the pensioners.

Over the northern entrance, which is of the Corinthian order, is a square tower lighted by arched windows, with a clock turret surmounted by an octagonal spire. Ormonde’s coat-of-arms can be seen above the doorway’s segmental pediment flanked by Corinthian pilasters.

In the centre of the eastern and western fronts, wide archways lead into the quadrangle, which on three sides and part of the fourth is surrounded by a piazza of Doric arches. 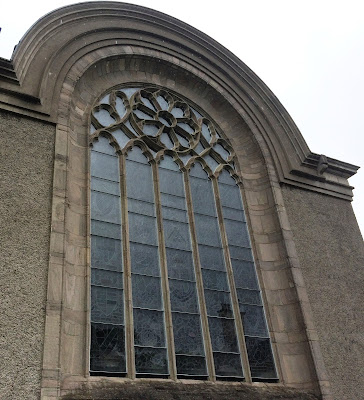 The east window of the chapel is said to have once belonged to the Priory of Kilmainham (Photograph: Patrick Comerford, 2014)

The original chapel was 86 ft long and 40 ft wide. It is said the east window once belonged to the mediaeval priory.

The chapel of the Royal Hospital is one of only two churches in Ireland that were dedicated to Charles King and Martyr. The other was the Parish Church of Hollymount, Co Mayo, in the Diocese of Tuam, but this too is no longer in use.

The Governor of the Royal Hospital was usually a distinguished general, and the included a master, deputy-master, chaplain, secretary, registrar, pay-master, physician, surgeon, assistant-surgeon, apothecary, reader, providore, chamberlain, butler, and fueler, who had apartments in the house.

The hospital housed five captains, an adjutant, and 250 invalid soldiers. They were supplied with housing, clothing, food, medical care, similar to the benefits received by the Chelsea Pensioners in London. The infirmary had 48 beds and there were cells for 12 “lunatics.”

The formal gardens have been restored in recent years (Photograph: Patrick Comerford, 2014)

At the end of the formal gardens to the north of the main building, the Garden Lodge, built ca 1730, a pretty little turreted house that was probably designed by Sir Edward Lovett Pearce, the architect who designer of the Irish Houses of Parliament in College Green.

Some sources say it was originally a garden banqueting house, others that it was “the steward’s or gardener's house.” 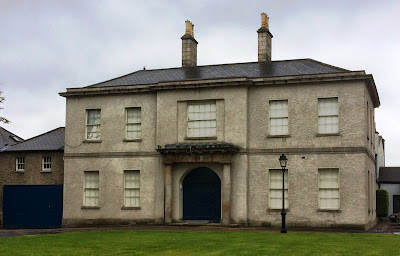 In the 19th-century, the building acquired increasing military significance and Queen Victoria twice visited the Royal Hospital. It became the residence and headquarters of the Commander-in-Chief of the army, who combined this role with that of Governor or Master of the Royal Hospital.

One of the last Masters of the Royal Hospital Kilmainham was Field-Marshal Sir Garnet Joseph Wolseley, Viscount Wolseley, who was born nearby in Golden Bridge House in 1833. One of the most decorated British generals and the biographer of the Duke of Wellington, he was descended from the Wolseley family of Mount Wolseley, and through them from the Wolseley family of Wolseley between Rugeley and Stafford in Staffordshite.

At the formation of the Irish Free State, the Royal Hospital was handed over to the Irish Government, which considered it as a potential home for the Oireachtas, the new Irish parliament. Eventually, however, it was decided to keep parliament in Leinster House in the city centre, and the Royal Hospital remained the home of a dwindling number of soldiers until 1927.

From 1930 to 1950, it was used as Garda Headquarters and it was later used as a storage location by the National Museum. The majestic statue of Queen Victoria that once stood on the lawn of Leinster House, was moved there in 1947 and was stored in the main courtyard. However, I do not know where it is today. 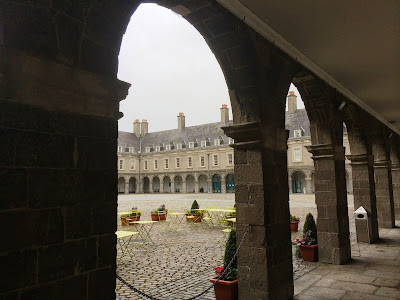 The Royal Hospital Kilmainham was restored by the Irish Government in 1984 (Photograph: Patrick Comerford, 2014)

On its 300th anniversary, the Royal Hospital was restored by the Government in 1984, and in May 1991, the Irish Museum of Modern Art (IMMA) opened in the Royal Hospital. IMMA represents in its permanent and temporary exhibitions international and Irish art of the 21st century and also runs educational and community programmes.

Each year on the National Day of Commemoration – the Sunday nearest 11 July, the anniversary of the Truce that ended the Irish War of Independence – the President, in the presence of members of the Government, the Dáil, the Senate, the Council of State, the Defence Forces, the Judiciary and the Diplomatic Corps, lays a wreath in the courtyard in memory of all Irish people who died in past wars and on service with the United Nations.

In recent years, the Royal Hospital Kilmainham has become a popular location for concerts during the summer months, including that Leonard Cohen concert in September 2012.

Posted by Patrick Comerford at 23:16 2 comments: