How the classical courthouse in
Carlow revolutionised Irish designs 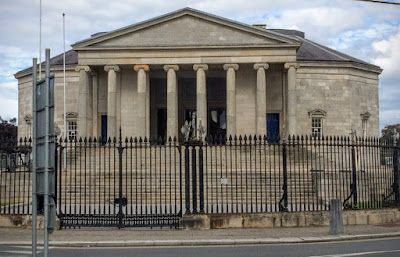 Carlow Courthouse, modelled on the Temple on the Ilissus in Athens, is one of the finest 19th century classical buildings in Ireland (Photograph: Patrick Comerford, 2016)

My visit to Carlow on Saturday [10 September 2016] for the launch of ‘My Right Shoe’ for the Jacket off your back left me with an afternoon to explore the architectural heritage of the town.

In the past, I have written about the Cathedral in Carlow, but the Courthouse is probably the most imposing building in the town.

Carlow Courthouse is one of the finest 19th century buildings in Ireland and a significant example of European Neo-Classicism. This is a polygonal classical building dating from the 1830s, and it was designed by William Vitruvius Morrison.

Although many local commentators continue to ascribe the design to Morrison’s father, Sir Richard Morrison, and say that the portico is modelled on the Parthenon in Athens, they are wrong on both counts. The Parthenon is Doric, while the courthouse in Carlow is Ionic and is, in fact, modelled on the Temple on the Ilissus in Athens.

The Ionic temple on the Ilissus is traditionally dated to the mid-fifth century BC, and was probably built ca 435-430 BC, a date some time between the building of the Propylaea or monumental gateway to the Acropolis (437 BC) and the Temple of Athena Nike, which was begun about 10 years later. When the Temple of Athena Nike was discovered in 1834 on the bastion next to the Propylaea to the Acropolis, it was recognised that there were many similarities between it and the temple on the Ilissus. These discoveries excited classical scholars almost 200 years ago, and so they explain how Morrison was inspired in his work in Carlow.

Local lore in Carlow says, incorrectly, that the courthouse was really intended for Cork, but that the plans were mixed up – to the advantage of Carlow. So, how did Carlow get such a splendid building?

By 1828, there were complaints that Carlow was one of the few counties in Ireland without a new or impressive courthouse. The generosity and the patronage of the Bruen family of Oak Park made it possible to build a new courthouse in the town. It cost £30,000 to build, which was a small fortune at the time.

The new courthouse was designed in 1830 by the architect, William Vitruvius Morrison (1794-1838), and it was built by the Dublin-based partnership of Arthur Williams and Gilbert Cockburn. Morrison was from a highly talented architectural family and his father, Sir Richard Morrison, was the most influential architect of his time. William was probably more gifted than his father, but he suffered from prolonged bouts of ill-health and died before his father at the age of 44 in 1838.

By 1832, the Board of Works was noting that the building was still only half completed, and it was not completed until 1834.

To some degree, Morrison was inspired by Robert Smirke’s designs for his Shire Hall in Gloucester (1816), with its giant Ionic portico of three bays flanked by two-storey, single-bay wings and approached by two shallow flights of stone steps.

Carlow courthouse is lavish and imposing in a style and manner not found in most later courthouses because of the high costs of such extravagant designs. It is built of Carlow granite and looks like a temple set on a high plinth. The front aspect highlights Morrison’s style of Greek revivalist architecture. The projecting central block is screened by a portico with eight style Ionic columns in the style of the Temple of Ilyssus in Athens, set above a grand flight of steps.

The recessed doorway leads to a central vestibule off which the two courtrooms open. Inside, Morrison’s design bears little resemblance to his father’s style, or to the style of any other building designed by James Gandon and his school. Gandon and his followers would have started with a hall out of which would open the courts, as in the Four Courts in Dublin.

In Carlow, however, Morrison started from the outside and worked inwards. He provided two D-shaped courtrooms to the left and right and these, coupled with the rectangular block of offices at the back, form a huge cross-shape.

The lighting inside is an example of the genius of Morrison in designing a way to provide light in his building by natural means. Morrison’s genius is captured in the centre of the building in a square that is primarily a light-well. All of this central section is lit brilliantly by a number of symmetrically placed skylights.

The back block and offices are lit by wide and tall rectangular glazed traditional casement windows. There are similar windows on each face of the polygonal-shaped central structure. The basement beneath the courthouse is a maze of cells and dungeons.

By the 1990s, Carlow Courthouse was showing its age: there was dry-rot in the roof and floor timbers, as well as rising damp, wet-rot and woodworm. A major restoration project was needed to return it to its former glory.

The challenge was to conserve as much of the original building fabric while carrying out the necessary repairs and improvements. Traditional building skills and crafts were deployed, bringing in specialist joiners, carpenters, stonemasons and plasterers. The plasterers were responsible for re-rendering the rear return in lime sand render. 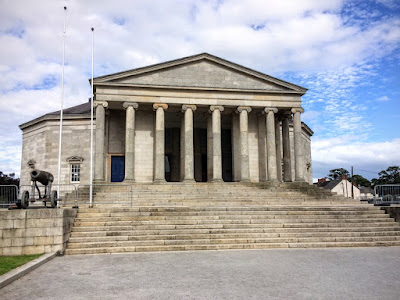 A Russian cannon captured in the Crimean War stands at the top of the courthouse steps (Photograph: Patrick Comerford, 2016)

Outside the courthouse, a cannon from the Crimean War stands at the top of the steps. This Russian gun was captured during the Crimean war. It was donated to the town after representations by the Town Commissioners in 1858 to the then British Minister of War, Lord Panmure (later the Earl of Dalhousie), and it commemorates Irish officers and soldiers who died in the Crimean War (1853-1856).

The Victoria Cross was introduced in 1856 by Queen Victoria in 1846 to honour acts of valour during the Crimean War. Tradition says the metal used to make the medals comes from Russian cannon captured at the Siege of Sevastopol. One of the early Irish recipients was John Lyons (1824-1867) from Carlow, who was awarded the VC in 1857 for his gallantry in the Crimean War. During the siege of Sevastopol, a live shell landed among the guard of the trenches. Without hesitation Lyons picked up the live shell and threw it over the parapet. His action saved many lives. He died in Naas, Co Kildare, in 1867.

The railings around the courthouse contribute substantially to the architectural impact of the building. They stand high on a limestone base and are topped by replicas of the ancient Roman axe and fasces, the Roman symbol of justice.

Desmond FitzGerald, the 29th and last Knight of Glin and President of the Irish Georgian Society, who died in 2011, wrote to The Irish Times in 1999 saying ‘the proposed plans’ to remove or alter the railings at Carlow Courthouse ‘would be a criminal act on the part of the Office of Public Works.’ He pointed out that the railings are ‘an integral part of the original architectural design.’

The refurbished courthouse was reopened on 21 March 2002, and there are plans to restore the magnificent iron railings that surround the site, to re-landscape the grounds and to provide additional parking facilities. 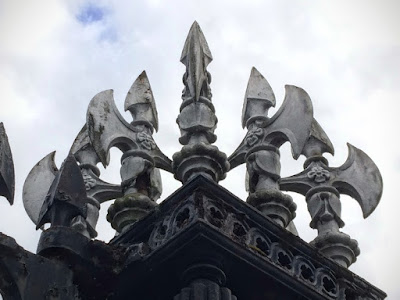 The railings around the courthouse are topped by replicas of the ancient Roman axe and fasces, the Roman symbol of justice (Photograph: Patrick Comerford, 2016)