A day in Florence starts the week in Tuscany 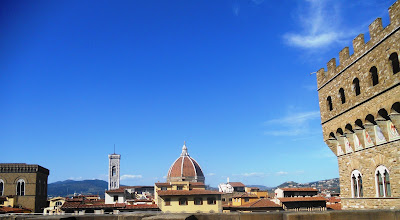 The Duomo of Florence and the Palazzo Vecchio seen from the terraces of the Uffizi (Photograph: Patrick Comerford, 2012)

This was my second visit to Florence, but a day never does justice to this city, and an afternoon in the Uffizi only gives you a tiny taste of what is in store in one of the greatest art galleries in the world.

We began our walking tour at the 11th century Baptistry in Piazza di San Giovanni, with its east door decorated with gilded bass bronze reliefs and the “Gate of Paradise.”

The Baptistry was built as part of the complex of the Duomo or Cathedral of Santa Maria del Fiore. The dome of the duomo is the city’s iconic landmark and stands along with the Leaning Tower of Pisa and the Coliseum in Rome as Italy’s three most photographed sites.

We worked our way down Calzaiuoli and past the church and museum of Orsanmichele, before taking a detour through the side street and alleys to Piazza della Signoria, the civic heart of mediaeval and Renaissance Florence, with its sculptures, statues, fountains, Loggia del Lanzi, built by the Swiss bodyguards of Cosimo I, and the Palazzo Vecchio, the centre of Florentine political intrigue in the high Middle Ages.

The most photographed item in this square is the reproduction of Michelangelo’s David, although Michelangelo’s original is now housed safe from weather and human touch some distance north in the Accadmemia. 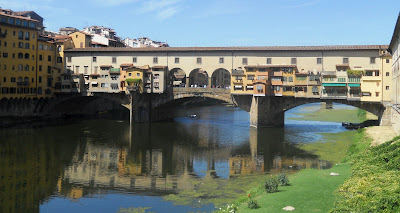 the Ponte Vecchio straddles the Arno at its narrowest point since 972 (Photograph: Patrick Comerford, 2012)

We skipped quickly through the arcades of the Uffizi to the banks of the Arno to see the Ponte Vecchio, straddling the river at its narrowest point since the year 972, before returning to the Palazzo Vecchio, and then making our way past the palazzo where Leonardo da Vinci lived while he was working in Florence.

In the Piazza di Santa Croce, we admired the basilica, which is the burial place of many Florentines, including Michelangelo, Galileo and Machiavelli; the statue of Dante; and the wide open square used once for burning heretics and still used once a year for the calcio storico, the local version of a rough-and-tumble mediaeval game of football. 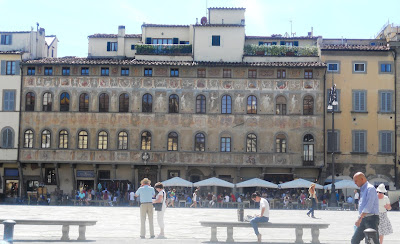 The fading facade of the Palazzo dell’Antella in the Piazza di Santa Croce bears a mark that marks the halfway line on one of the oldest football pitches (Photograph: Patrick Comerford, 2012)

After a pleasant lunch in Casa Toscana, off the Piazza di Santa Croce, we returned for the afternoon to the Uffizi.

But how do you summarise an afternoon in the Uffizi?

Fra Angelico. Giotto. Botticelli. Piero della Francesca. Raphael. Da Vinci. Michelangelo. A week in Tuscany, a month in Tuscany, could never do justice to one room in the Uffizi.

We gathered together again at the Baptistry in Piazza di San Giovanni and returned to Montecatini Terme, before going on to Tettuccio for a balmy evening with Verdi and La Traviata under a moon that was almost full.