Skies and seas of blue, green and golden fields

It was warm today. It was almost as if we were being reminded of the unfulfilled promises of what summer ought to have been this year. The temperatures in south Dublin and north Co Wicklow rose to 18 and 19, and there are promises of warmer, sunnier days in the week ahead – just as the students return for a new academic year.

Coming back from Belfast to Dublin on the train last night, darkness closed in at Newry, and had completely enveloped the countryside before the train even reached Dundalk. I peered out as the train passed over the Boyne at Drogheda, hoping to get a glimpse of the estuary waters. He train then moves little inland, but at Laytown and Balbriggan there were glimpses of the coast and a harbour once again.

And then, as the train moved along the line that runs parallel with the coast road between Balbriggan and Skerries, beside Ardgillan estate, the North Strand and harbour at Skerries spread out in a delightful and bejewelled arc to the east.

Glimpses of the sea were hidden in the dark by the time the train passed from Rush over Rogerstown estuary to Donabate, and the last glimpse of the sea was under the lights of the marina and the boatyards at Malahide.

I was hardly going to miss an opportunity to walk on the beach today if it came my way.

Here was lunchtime meeting in Rathmines with a bishop, three people from the agency Feed the Minds, two people from the Church of Ireland Bishops’ Apeal Fund and two ordinands.

And as I stepped out into the sunshine in Rathmines, it was obvious those bright blue skies and the warm sunshine were gifts that were going to remain for the afternoon. 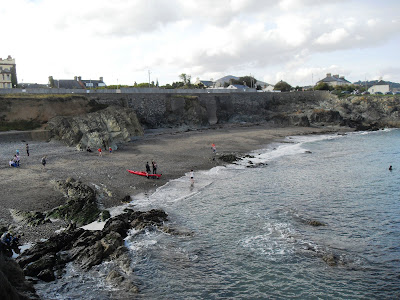 A feeling of a lingering, if not enduring, summer in Greystones this afternoon (Photograph: Patrick Comerford, 2011)

We ended up in Greystones, were people were walking along the cliffs, and down on the small beach behind the new harbour families were gathered in small numbers, and two dogs were chasing in and out of the water. People braving the water included a happy little girl, one elderly woman and two people in wet suits with snorkels.

Out in the water, there was a large number of sailing boats.

Oh what a summer this could have been.

Waves on the shore in Greystones this afternoon (Photograph: Patrick Comerford, 2011) 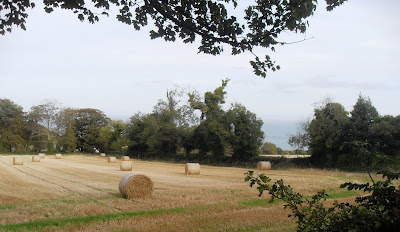 Fields of green and gold above Greystones, looking out to the Irish Sea this afternoon (Photograph: Patrick Comerford, 2011)

We headed back through fields of green and gold that looked back out onto the sea, through Enniskerry and Glencree, back over the Feather Bed by Lough Dan, and down through Hell Fire Cub Forest.

Indeed, oh what a summer this could have been. 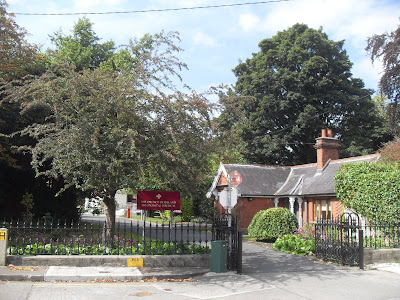 The Church of Ireland notes in The Irish Times today [Saturday, 24 September 2011] opens with the following news item:

Next Monday lecture term begins in the Church of Ireland Theological Institute.

There will be 17 ordinands in full-time training in years one and two of a three year course and a further 13 ordinands are in part time training. The third year students, of whom there are 17, are being ordained as deacon interns and will spend a year dividing their time between working in a parish and continuing their studies in the institute.

In addition to those who have been selected for ministerial training a further 30 students are involved in the Foundation Year programme, the successful completion of which is an essential prerequisite to selection for training.

The institute’s teaching staff is unchanged although there has been some re–allocation of responsibilities. The Director is the Revd Dr Maurice Elliott and he is assisted by Canon Patrick Comerford who teaches Anglicanism and liturgy, Dr Katie Heffelfinger who lectures in biblical studies and hermeneutics, the Rev Patrick McGlinchey, par- time lecturer in missology, and the Revd Ted Woods who is the part time MTh internship co–ordinator. In addition teaching is provided by staff from TCD and the ISE and by visiting lecturers.
Posted by Patrick Comerford at 19:13 No comments:

Email ThisBlogThis!Share to TwitterShare to FacebookShare to Pinterest
Labels: Ministry, The Irish Times

A day or two in Belfast

A day or two at Edgehill Theological College, off the Malone Road in Belfast (Photograph: Patrick Comerford, 2011)

I have just spent the last day or two working in Edgehill Theological College off the Malone Road in Belfast. The Edgehill campus at Lennoxvale is near the main buildings of the Queen's University of Belfast and the university halls of residence.

The college is a ministry of the Methodist Church in Ireland, providing ministerial formation, university education, adult education and training.

The college also hosts the Edgehill Reconciliation Programme, which contributes to peace-building in Northern Ireland through a range of educational, cross-community and inter-Church projects.

Edgehill Theological College has close links with the Church of Ireland Theological Institute, including exchanges, and in recent weeks has started a partnership with Saint John’s College, Nottingham.

From 1868, Methodist ministerial training was located at the Methodist College, Belfast. But it soon became clear that a separate centre was necessary.

The site and premises at Lennoxvale were bought in 1919 to establish a residential and training centre for students preparing for the ordained ministry.

After the 3.5 acre site and main house at Lennoxvale were bought, auxiliary buildings were added and the separation of the Theological Department from the Methodist College was approved by the Methodist Conference in 1926, a process that was completed by Act of Parliament in 1928. Since then, Edgehill Theological College has served the Methodist Church in Ireland for over 80 years.

Bright new premises at Edgehill were built in 2001-2002, and the college now has a new library, lecture rooms – which also serve as a Conference Centre – a spacious dining area, a Resource Centre (‘No 9’), a Methodist Study Centre, a renovated worship centre and offices. 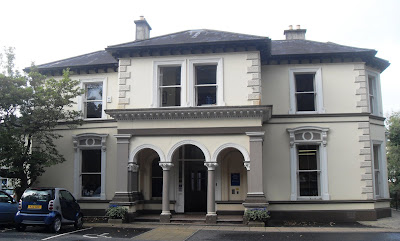 At the heart of the small Edgehill campus is a large, two-storey Italianate house with triple arcaded entrance porch, stables and conservatory which were added in 1891. This main house was designed by Young and Mackenzie, a Belfast architectural partnership formed by Robert Young and his former pupil, John Mackenzie, in 1867 or 1868. The partnership was joined by Young’s only son, Robert Magill Young, in 1880.

By the beginning of the 20th century, the Youngs and Mackenzie had developed the most successful architectural practice in Belfast. They had become the leading architects for the Presbyterian Church in the north-east and their commercial commissions in Belfast included the Scottish Provident and Ocean Buildings in Donegall Square and the Presbyterian Assembly’s Hall. 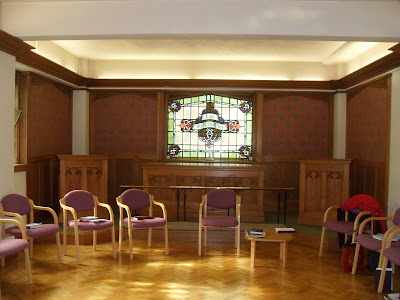 The interior of the Chapel in Edgehill Theological College, Belfast, designed by Adam Bunyan Dobson in 1937 (Photograph: Patrick Comerford, 2011)

In 1932, the Belfast architect Adam Bunyan Dobson designed the Principal’s House, which stands on the south side of the main house, and where I stayed on Thursday night as a guest of the principal, the Revd Dr Richard Clutterbuck, and the Revd Diane Clutterbuck, former Methodist missionaries in Tonga. In 1937, Dobson also designed the chapel, where I spoke, preached and presided at the Eucharist yesterday [Friday].

Dobson, who was born in Belfast in 1870, was a pupil of William John Gilliland, and had set up his own practice in Belfast by 1923. He was mainly involved in designing houses for developers and, during the 1930s, in work for the Methodist Church, of which he was a member. He retired to live in Whitehead, Co Antrim, around 1947.

Most of the buildings on Lennoxvale are owned by Queen’s University Belfast, and the main university building – within a short walk – is one of the great architectural set pieces in Belfast. Its imposing front façade is instantly recognisable, and it is often seen on banknotes and tourist posters.

The then Queen’s College was established, along with colleges in Cork and Galway, under Sir Robert Peel’s Irish Colleges Act 1845. A site in the southern suburbs of the rapidly expanding Belfast was chosen, close to the Botanic Gardens which had been laid out in 1841.

Lanyon was then the Antrim County Surveyor and was already a well-established architect when he was chosen to design the new college. His design borrowed from the general Gothic and Tudor character of the great mediaeval universities, particularly Magdalen College, Oxford, and reflected the architectural ethos of the day that drew on historical associations to create an air of authority and of presence.

The soft red brick and sandstone mellowed quickly to create a sense of antiquity or even timelessness. The long west-facing front elevation conveyed a size and status that reflected the ambitions of the new Queen’s College.

The drawings were largely prepared by Lanyon’s young assistant, William Henry Lynn, who went on to leave his own mark on the university over many years.

The college was almost finished in August 1849 when Queen Victoria and Prince Albert visited Belfast – their only visit to Belfast. The college finally opened that December.

Across the street, Elmwood Hall is housed in the former Elmwood Presbyterian Church, which was designed by John Corry in 1859 and opened in 1862. It is one of Belfast’s best High Victorian designs – an Irish version of a Lombard Gothic church. 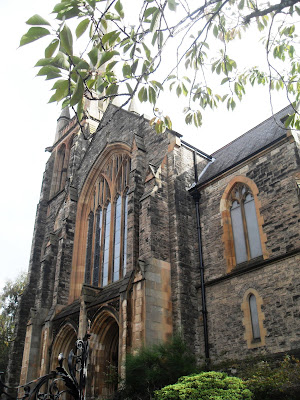 On the way back to Lennoxvale and Edgehill, I passed by Fisherwick Presbyterian Church, which opened in 1901. This beautiful, robust-looking edifice is typical of the late Victorian and Edwardian period and was designed by the architect SP Close.

The congregation was originally located in Fisherwick Place, but many of its members moved from the city centre to the leafy suburban streets around the Malone Road at the end of the 19th century, and as they moved they even took with them the monuments and memorials from the original, earlier church.

The Gothic style and shape of the building is at odds with the traditional forms for a Presbyterian church, and is in the shape of a crucifix. The stained glass window in the south transept was designed by Sir Edward Burne-Jones (1833-1898) and depicts the Incarnation and the Nativity.

In 1874, Burne-Jones also designed the chapel east window in Saint George’s Chapel in Saint Editha’s Church, Tamworth, for William Morris. Burne-Jones and Morris worked closely with Ford Madox Brown, including working together in Saint Editha’s, and all were members of the Pre-Raphaelite Brotherhood.

The first major exhibition of Ford Madox Brown’s work since 1964 opens in Manchester Art Gallery today [24 September]. The exhibition brings together 140 works from public and private collections, including his epic paintings of Victorian life, Work and The Last of England. This comprehensive survey of Brown’s work looks at the pioneering role the artist played in the development of Pre-Raphaelite movement.