Lunch in the Brighton of Ireland
before the next storm lands 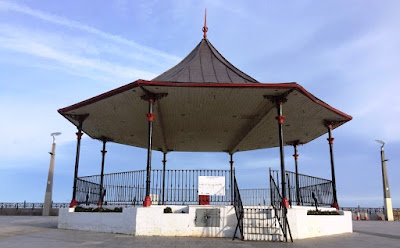 The once elegant Victorian bandstand on the promenade in Bray, Co Wicklow (Photograph: Patrick Comerford, 2015)

Storm Desmond, with a status red warning for rain in Ulster and Connaught, is about to hit the west coast of Ireland. The storm blowing across these islands, have come in alphabetical order one after another: Abigail, Barney, Clodagh and now Desmond. But, as we wait for more high winds and heavy rains, there was a moment of blue brightness in the skies above early this afternoon and between a busy working week and what looks like a busy working weekend, I took an hour or two for lunch in Carpe Diem in Bray, Co Wicklow and a walk along the beach.

Bray is a traditional Victorian seaside town, with its bandstand, pavilions, promenade, Scottish-baronial style hotels and guest houses, amusement arcades and once elegant but sometimes-decaying houses, as well as more than its share of nursing homes.

In the 19th century, Bray boasted cable cars to take tourists to the highest point of Bray Head, magnificent Turkish baths, and a vast esplanade.

The town was built on the vision of one man, William Dargan, who saw Bray’s potential with its seaside location to become one of the most desired locations on the east coast, within easy reach of Dublin by train.

In 1841, the extension of the railway from London to Brighton had transformed Brighton on the south coast, and Dargan’s vision was to make Bray the Brighton of Ireland.

True to his vision, within a few years of the arrival of the train to Bray, Dargan had laid out the seafront esplanade, built the fashionable Turkish baths and a substantial terrace of houses. He developed wide roads, a fair green, a market, and helped to install gas lights. He was also a major investor in the International Hotel which once stood opposite the war memorial near the railway station.

Dargan was credited with transforming what was once a one-street town into a seaside resort that has since attracted thousands of visitors each year.

Although the Turkish Baths, the cable cars and many of the hotels are long gone, the once Victorian elegance of Bray can still be seen in the esplanade, the band stand, the surviving hotels, and many of the elegant houses, streets and open spaces.

As I walked along the shore at the seafront, the sky above was so blue it was possible to see the traces of a number of flights, and I wondered whether the Christmas traffic of emigrants returning home for holidays had already started, or was this just another busy weekend for air traffic to and fro, between Ireland and England.

Already, Carpe Diem is decorated for the holiday season, and taking bookings. I wondered whether there is any going back to the pre-austerity office Christmas parties and dinners. 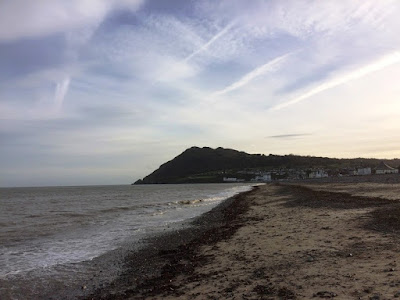 Walking on the beach in Bray this afternoon (Photograph: Patrick Comerford, 2015)

Waiting in Advent 2015
with Dietrich Bonhoeffer (6)

Advent began last Sunday [29 November 2015], and for the next few weeks, I have prepared my own Advent Calendar. As we wait and prepare for Christmas, I invite you to join me each morning for a few, brief moments in reflecting on the meaning of Advent through the words of the great German theologian and martyr, Dietrich Bonhoeffer (1906-1945).

In his sermon in Barcelona on the First Sunday of Advent, 2 December 1928, Bonhoeffer said:

“Jesus stands at the door knocking (Revelation 3: 20). In total reality, he comes in the form of the beggar, of the dissolute human child in ragged clothes, asking for help. He confronts you in every person that you meet. As long as there are people, Christ will walk the earth as your neighbour, as the one through whom God calls you, speaks to you, makes demands on you. That is the great seriousness and great blessedness of the Advent message. Christ is standing at the door; he lives in the form of a human being among us.”