Churches and ruins in Callan
that tell local church history 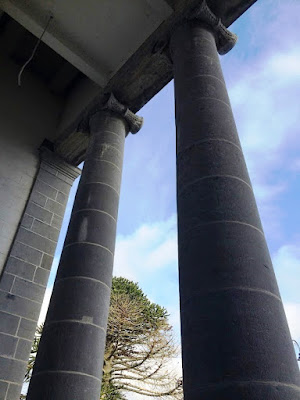 The ‘Big Chapel’ in Callan has a fine, full-height Ionic portico and columns (Photograph: Patrick Comerford, 2016)

During an afternoon’s break from this week’s conference in Kilkenny, two of us set out on a brief venture through south Co Kilkenny, visiting the Comerford ancestral home at Ballybur Castle, near Cuffesgrange, where we received a warm welcome from Frank Grey and his family, who have been living here since 1979; Callan, where we visited the ruins of the Augustinian Priory, the long-closed Saint Mary’s Church of Ireland parish church, where we failed to get access to see some of the Comerford family tombs and monuments, and Saint Mary’s Roman Catholic parish church; and the ruins of Kells Priory. 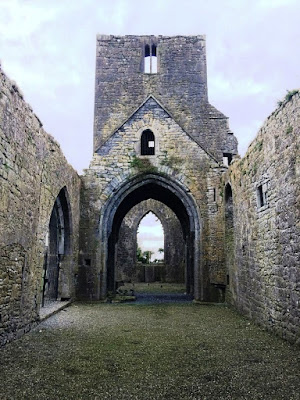 The ruins of the Augustinian Friary in Callan, dating back to 1461 (Photograph: Patrick Comerford, 2016)

The ruins of the Augustinian Friary in Callan stand on slightly elevated ground in an enclosed field known locally as the Abbey Meadow, on the north-east fringes of the town and on the banks of the King’s River.

The friary dates from 1461, when Edmund Butler of Pottlerath, a noted patron of literature, successfully petitioned Pope Pius II for the foundation of the friary. Edmund Butler died in 1462, the buildings were erected by his son, James Butler, probably after 1467.

Callan became an observant community in 1472, when the friars adopted the fashion spreading across Europe for strictest observance of the monastic rules. Later, in 1479, Callan became the centre of the Irish Observant Congregation of Augustinians.

At the Reformation, Callan Friary was dissolved and its lands and estates passed to the Earls of Ormonde. Two centuries later, the Augustinians founded a new friary in Callan in 1766. 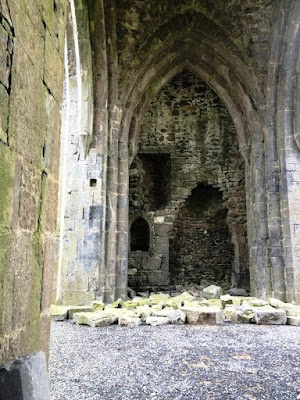 The friary ruins were gated and locked and I was not able to see inside (Photograph: Patrick Comerford, 2016)

The ruins of the friary church are those of a long, rectangular building with a central bell-tower. The east end or choir is lit by a fine east window and its south wall has one of Ireland’s finest triple sedilias or seats for the priest, deacon and subdeacon at the liturgy. Unfortunately, the ruins were gated and locked and we were not able to see this.

At the East End, a large gaping arched window is all that remains of a traceried window that once poured light down upon the choir. A spiral staircase leads up to the bell tower which has three storeys, but sadly we could not see this either.

The domestic buildings and the cloister court no longer survive, but a freshwater well still remains on the grounds of the ruined abbey. 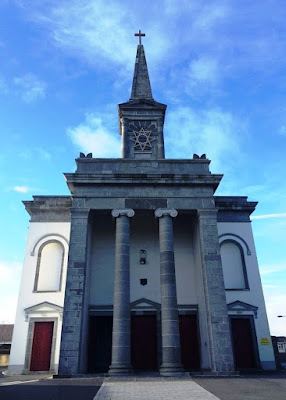 Saint Mary’s or the ‘Big Chapel’ was at the centre of a 19th century schism in Callan (Photograph: Patrick Comerford, 2016)

In Callan, after failing to visit the mediaeval Saint Mary’s, we crossed to the Roman Catholic parish church, which also named Saint Mary’s but is known popularly as ‘The Big Chapel’ because of its associations with a local schism in the 19th century.

The public row started in 1868 and continued until the death of Father Robert O’Keeffe in 1881. He challenged the authority of the Bishop of Ossory, later Archbishop Patrick Moran of Sydney, the bishop’s uncle and Archbishop of Dublin, Cardinal Paul Cullen, and the Vatican over the control of education in Callan. He championed the national school system and invited French nuns to the parish, although his bishop favoured the Christian Brothers and the Sisters of Mercy.

The dispute led to lawsuits, riots and extensive press coverage, and attracted the attention of the Prime Minister, William Gladstone.

Father O’Keeffe’s took serial lawsuits against his own curates, his bishop, and the cardinal. He was dismissed as manager of a number of national schools and chaplain of the local workhouse, and the town of Callan was split into warring camps, and for almost 10 years.

For many people at the time, Callan and O’Keeffe represented an Irish version of a global Catholic-secular culture war that encompassed both the definition of papal infallibility and the German kulturkampf.

Father O’Keeffe’s removal from publicly funded positions at the insistence of the Church authorities almost wrecked the Irish system of national education.

The spectacular libel case of O’Keeffe v Cullen in Dublin in 1873 saw the competing claims of canon and civil law tested in public fashion as Ireland’s first cardinal was brought before the Queen’s Bench.

Father O’Keeffe’s bishop disparagingly dismissed the supporters of the priest as the “lower classes and women of ill-repute.”

On 26 May 1876, The Irish Times reported that Father O’Keeffe was forced to make “a personal apology” to Cardinal Cullen, to “submit himself to diocesan control,” to abandon litigation against his “ecclesiastical superiors,” and to resign as parish priest.

Thomas Kilroy wrote a fictitious account of the events in his novel The Big Chapel, which received the Guardian Fiction Prize in 1971 and was shortlisted for the Booker Prize.

This church is an attractive landmark in the centre of the town, and was built between 1836 and 1843 for the Revd James Mullins. The architect is unknown, but the church is generally attributed to John B Keane (died 1859), although it also recalls the work of William Farrell (died 1851), particularly Christ Church, Belfast, which he designed in 1833.

This is a detached, six-bay double-height neo-classical single-cell church. It has a fine, full-height Ionic portico and columns and flanking piers on the liturgical ‘west’ front and an unusual pedimented belfry and obelisk-style spire, a pitched slate roof with clay ridge tiles, and cast-iron rainwater goods on cut-stone eaves having consoles. The roof to the portico is not visible behind the parapet. 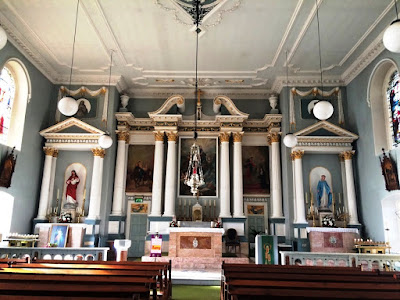 The interior of Saint Mary’s is well-preserved and has many features of artistic importance (Photograph: Patrick Comerford, 2016)

Inside, the well-preserved interior of the church has a range of features of artistic importance, including stained glass panels attributed to the Franz Mayer Studio of Munich (established in 1847), carved timber joinery, and delicate plasterwork dressings, all displaying high quality craftsmanship.

Above the altars there are paintings in plasterwork drapery frames, and the decorative plasterwork cornices to the ceiling have foliate ceiling roses.

Outside, the building is fronted by twin gateways that complement the church, lending it a very formal air for a town of this size.

From Callan, we drove on to Kells, where we walked through the extensive ruins of the Augustinian Friary, which must have been one of the largest monastic foundations in mediaeval Ireland.

There is a well-loved local aphorism that says “Kells was, Kilkenny is, Callan will be!”

We returned to Kilkenny, and visited Grace’s Castle, the Butterslip, the ‘Hole in the Wall’ and Saint Mary’s Roman Catholic Cathedral, before arriving in Saint Canice’s Cathedral for our celebration of the Eucharist.

But these visits are stories for another day.