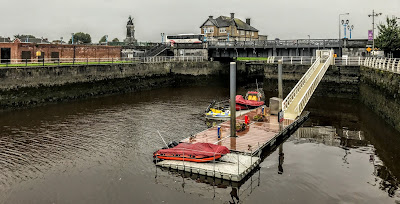 The rain throughout the week and this weekend means I never gout for a walk on the beach.

Each summer, as thousands of people left Limerick City for their annual holidays in Kilkee, an area jutting into the River Shannon become known as ‘Poor-Man’s Kilkee’ because of its popularity among families who for could not afford the train fare to go to Kilkee and so would go on to the mudflats at low tide and swim in the Shannon.

This jetty and pier were built around 1820, forming a lock at Sarsfield Bridge. They were built with rough-hewn large limestone blocks, with a rounded outer edge extending to the deck of the pier at different lengths, and lawn grass to the remainder of the decks.

The jetty, completely enclosed by steel railings around 2000, contains a circular arrangement of eight cut limestones that form part of the former swivel bridge.

The Limerick Boat Club building occupies most of the main pier, with two iron canons at the south end of main section, while the jetty is now a public outdoor space with benches. The area is a landmark on the riverscape of Limerick, and provides a recreational use along the River Shannon. 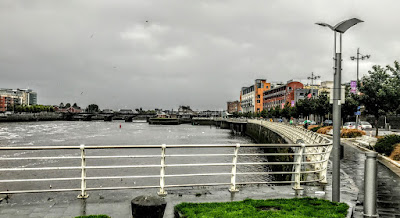 Walking along the boardwalk by the River Shannoln in Limerick o(Photograph: Patrick Comerford, 2017)

Harvey’s Quay began as two separate Quays named after the men who built and developed this part of Limerick in the 1820s. Reuben Harvey and James Fisher were both Quakers or members of the Society of Friends.

The original Harvey’s Quay was located between Bedford Row and Lower Cecil Street. Harvey’s Quay is named after Reuben Harvey, who built that portion of the quay on a section of land leased to his father, Joseph Massey Harvey, by Lord Pery in 1791.

The additional section from Bedford Row to Sarsfield Bridge was then known as Fisher’s Quay, originally built by James Fisher in 1791. The two quays were eventually merged and by the mid-20th century, and this stretch is now known only as Harvey’s Quay. It continues on into Howley’s Quay and Bishop’s Quay.

Joseph Massey Harvey (1764-1834), was a prominent Cork Quaker who moved to Limerick with his wife and children in 1786 to work at the Fisher Flour Mills, owned by James Fisher. Joseph and his wife built Summerville on a section of land that was later known as ‘Quaker Fields.’

Joseph Massey donated a portion of his lands at the ‘Quaker Fields’ on the Ballinacurra side for use as a Quaker burial ground, and he and his wife were buried there with many of their children.

Their son, Rueben Harvey (1789-1866), lived on Pery Square. His youngest brother was the Irish botanist William Henry Harvey (1811-1866), Colonial Treasurer in Cape Town. He became an Anglican and Charles Darwin praised his work as a botanist.

Further along the quays, Bishop’s Quay is named after William Cecil Pery, the Church of Ireland Bishop of Limerick, whose garden backed onto the quay.

Howley’s Quay is named after William Howley (1790-1867), Steamboat Quay was the mooring point for steam powered ships, Honan’s Quay named after Matthew Honan, a Limerick merchant, and Arthur’s Quay was built by the Arthur family , whose members also gave their names to Patrick Street, Francis Street and Ellen Street.

The new boardwalk takes advantage of the views of the River Shannon, and there are a number of sculptures along the boardwalk. But there are for talking about another day. 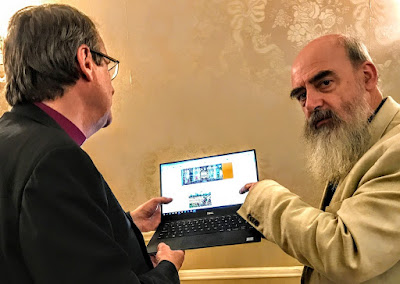