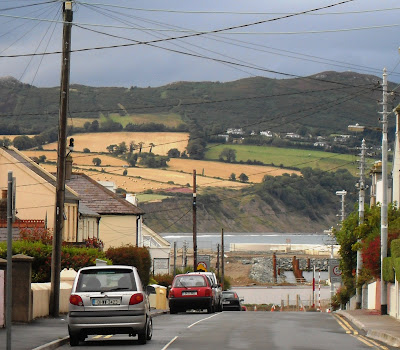 The harbour and green and golden fields on the slopes of Bray Head seen from Trafalgar Road and the front of the La Touche Hotel in Greystones this afternoon (Photograph: Patrick Comerford, 2011)

I’m not sure whether it’s another outbreak of sarcoidosis symptoms, but at the moment I’m coping with pains that run from my neck and my back, into my left shoulder and down my left arm, sometimes making my arm feel cramped and my fingers feel numb, with a sense of tingling.

My medication has been increased, so that my intake of tablets in the morning and the evening looks like the limbs and components of Bertie Bassett and his multi-coloured liquorice allsorts. I have not been sleeping well for the last few nights, but I had enough of self-pity by this afternoon. Distraction is almost as good as a cure, so I decided to head off for a beach walk this afternoon.

We parked close to the harbour at Greystones, Co Wicklow, where the project is causing much controversy. Shops and houses throughout the town display banners demanding the return of the harbour and that the hoarding should be taken down. 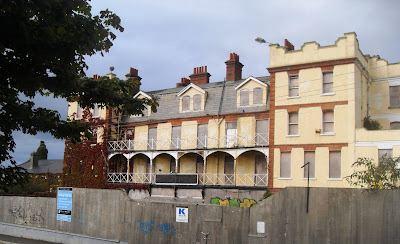 The sad facade of the former La Touche Hotel in Greystones this afternoon (Photograph: Patrick Comerford, 2011)

There’s plenty of hoarding too around the remains of the La Touche Hotel, which was abandoned in 2004 and then suffered fire damage in 2006. Three years ago, my cousin Donal Buckley reported in the Irish Independent that the La Touche Hotel site on Trafalgar was being sold by the receiver, Jim Luby, with an asking price of €15 million. It’s still for sale, but I wonder what the asking price is today?

Allied Irish Banks had appointed Jim Luby of McStay Luby to a number of companies formed on a joint venture basis to develop the 2.2 acre site. They had full planning permission for 85 large apartments, a 1,464 sq m, 10-bedroom hotel and six ground-floor retail and office units with a combined floor space of 818 sq m. The site also includes three residential houses – An Tigin and 'Eureka on Marine Terrace and Cliff Cottage on Marine Road – and an adjoining 0.35-acre site that offered further potential for development.

The site is zoned “town centre” and is located in the heart of Greystones, with frontage onto Trafalgar Road, Cliff Road and Marine Terrace and has superb sea views out onto the Greystones coastline. One of the conditions of the planning permission is that the facade of the original hotel, with its cast iron balconies, is retained in any new hotel.

The hotel was first built as the Grand Hotel and was once an elegant statement of the late Victorian and early Edwardian style of building. Photographs once on display, but probably now lost, showed a large sailing ship moored to the quay of the new Greystones harbour wall, which was built in 1840. Other photograph showed a horse-drawn stagecoach, the houses on the north side of Sidmonton terrace with nothing between them and the hotel.

From the La Touche Hotel we walked on along the cliffs and the coastline to the South Beach. It was late afternoon by now, and the sky and the water were grey in Greystones, with the gulls the only sign of life along the beach.

We walked back into Greystones, had coffee in Insomnia, and collected the Guardian, a bottle of wine, bread and olives for the dinner table this evening. But the clouds had lifted by the time we returned to Trafalgar Road and the site of the La Touche Hotel. The green and golden fields on the slopes of Bray Head were clearly visible, and it was possible – just possible – to imagine that this was a summer evening.

When the journey is as exciting as the destination 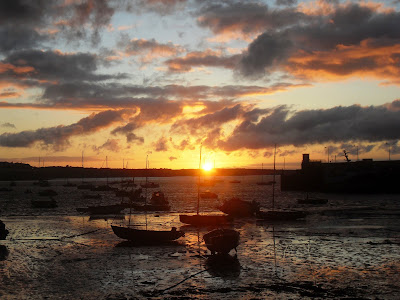 Seven of us tried to reach Lambay Island last night. We gathered at ‘Storm in a Teacup,’ the ice-cream shop at the entrance to the pier at Skerries Harbour. The sea looked calm, the rain was holding off, and sunset was at least another two hours away.

I have walked the beaches and harbour of Skerries so often in the past few years, but I have never been out to the islands.

Local boatman Eoin Grimes, who organises Skerries Seatours, grew up around the sea in Skerries and has spent all his life involved in boating. He has sailed all his life, has worked for several years as the “punt man” for Skerries Sailing Club and is a member of the local lifeboat crew. As you can imagine, Eoin is also steeped in local lore and history.

This summer, Eoin has been offering Skerries Sea Safaris, with exciting fast tours of the Skerries Islands, Lambay Island and Rockabill Lighthouse. Last night, we joined him in his high-speed craft for a sea tour that promised to bring us out from Skerries Bay, past Saint Patrick’s Island, Shenick, Rockabill, and then down along the coast past Loughshinny and Rush to Lambay Island.

It was going to take about 20 minutes to reach Lambay Island, which is a difficult but interesting place to visit. It is the largest island off the east coast of Ireland, and the most easterly point of Lambay is also the eastern-most part of the Republic of Ireland. 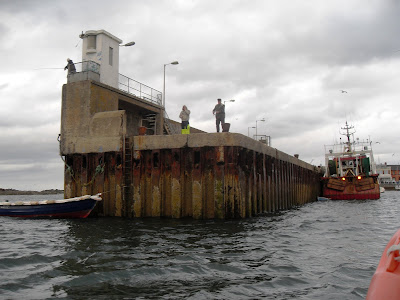 For centuries, Lambay was owned by the Archbishops of Dublin. In 1805, the leasehold interest in the island was inherited by Sir William Wolseley, and in 1814 it was acquired by the Talbot family of Malahide Castle. In 1860, the island’s tenant farmers were removed and replaced with English and Scottish tenants.

After selling Portrane House, Count James Considine bought Lambay in 1888, but it was sold for £9,000 to the Baring banking family in 1904. Cecil Baring commissioned Sir Edwin Lutyens (Lord Revelstoke) to rebuild the main house on the island. The island has claimed a number of shipwrecks. The most notable was the RMS Tayleur, which struck the island in 1854 and sank with the loss of 380 lives.

Lambay has one of the largest and most important colonies of seabirds in Ireland, including 50,000 Common Guillemots, 5,000 Kittiwakes, 3,500 Razorbills and 2,500 pairs of Herring Gulls, as well as Puffins, Manx Shearwaters, Fulmars and other species. The island also has Ireland’s only east-coast colony of grey seals, a herd of about 200 fallow deer, and a large number of wallabies hopping around the island – first introduced to Lambay in the 1980s when Dublin Zoo was overcrowded.

I’ve often looked across at Lambay from my grandmother’s house in Portrane, but the Baring Family Trust is still cautious about allowing access to the island, a caution that has helped preserve the birdlife – and the wallabies.

But we never reached Lambay last night. Within ten minutes we were level with Loughshinny but the swell was too high and the waves too strong for Eoin’s high-speed craft and, sensibly, he turned back.

On our way back to Skerries we had good views of Shennick with its Martello Tower, Rockabill with its lighthouse, and Saint Patrick’s Island, the most distant of the Skerries islands, with its low cliffs and the ruins of the early monastic settlement that later moved to Holmpatrick. Saint Patrick’s is the most important of the Skerries islands for breeding seabirds, with Cormorant, Shag and Herring Gull among the most prominent species.

We then came back past Colt Island, the smallest of the Skerries islands, and Red Island, which is only an island in name. Before turning back into Skerries Harbours we had panoramic views of Ardgillan Castle, with its green lawns sweeping down to the coast in the grey shades of dusk.

We were back in Skerries Harbour within an hour. Two of us stopped for an ice cream at ‘Storm in a Teacup’ for setting off for a walk in the twilight around Red Island, down onto the South Beach, and back around the harbour. The sun was now setting, and we lingered a little longer as the harbour was lit up with amber and golden lights.

Perhaps Lambay is like Cavafy’s Ithaka – sailing there is full of promise, and the journey is as exciting as the destination. But I still hope to reach Lambay some summer’s day.

If you would like to sail to Lambay or tour the Skerries islands call Eoin Grimes at: 0863043847; Email: skerries.seatours@gmail.com; Facebook: Skerries Seatours. 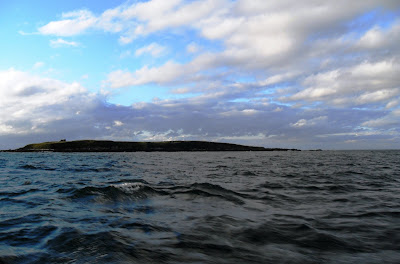 WE sailed around the Skerries islands, but we never reached Lambay (Photograph: Patrick Comeford, 2011)

As you set out for Ithaka
hope the voyage is a long one,
full of adventure, full of discovery.
Laistrygonians and Cyclops,
angry Poseidon—don’t be afraid of them:
you’ll never find things like that on your way
as long as you keep your thoughts raised high,
as long as a rare excitement
stirs your spirit and your body.
Laistrygonians and Cyclops,
wild Poseidon—you won’t encounter them
unless you bring them along inside your soul,
unless your soul sets them up in front of you.

Hope the voyage is a long one.
May there be many a summer morning when,
with what pleasure, what joy,
you come into harbours seen for the first time;
may you stop at Phoenician trading stations
to buy fine things,
mother of pearl and coral, amber and ebony,
sensual perfume of every kind—
as many sensual perfumes as you can;
and may you visit many Egyptian cities
to gather stores of knowledge from their scholars.

Posted by Patrick Comerford at 10:27 No comments: