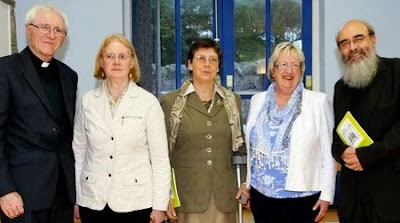 This photograph and half-page report are published on the back page (p. 12) of the current edition of the Church of Ireland Gazette (6 June 2014)

A new booklet on the history of the Moravian Burial Ground at Whitechurch, Dublin, was recently launched in Whitechurch Old Schools.

Written by Rosemary Power, The Moravian Burial Ground at Whitechurch, County Dublin, looks at the burial ground – where over 700 people of the Moravian tradition have been buried since 1764 – and provides a brief guide to the Moravians.

Prceeds from the sale of the booklet will go towards the work of the Moravian Church.

Canon Patrick Comerford paid tribute to the author’s work as a historian, folklorist and pioneering ecumenist: “She is a living reminder that the Moravians in this area are not dead and are not to be relegated to recording their graves and burial grounds.”

He added that Moravians had never sought to expand their own ecclesiastical empire, but, rather, to put themselves at the service of the wider Church and whilst the Moravian Church might be a numerically small denomination in Ireland, it had enriched the life of the Church of Ireland.

The Revd Sarah Groves, minister of Gracehill Moravian Church, Co. Antrim, paid tribute to the rector of Whitechurch, Canon Horace McKinley, as the “unofficial custodian” of the Moravian Burial Ground for many years.

“Rosemary’s booklet tells the story of the people, who they were, why they were here and the faith that brought them here,” Ms Groves added. “Today is not the end. It’s the end of the beginning so that the stories of these people will continue to be told.”

Both Canon Comerford and Ms Groves are part of the talks taking place between the Moravian Church and the Church of Ireland.