Slavery and freedom in religion 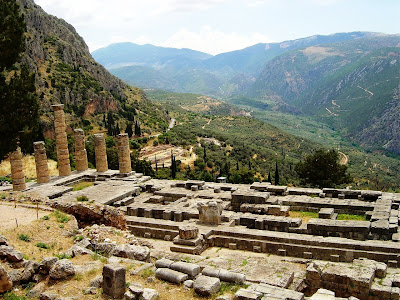 Delphi and the ruins of the Temple of Apollo ... the slave-girl in Philippi was part of the cult of Apollo (Photograph: Patrick Comerford)

16 One day, as we were going to the place of prayer, we met a slave-girl who had a spirit of divination and brought her owners a great deal of money by fortune-telling. 17 While she followed Paul and us, she would cry out, ‘These men are slaves of the Most High God, who proclaim to you a way of salvation.’ 18 She kept doing this for many days. But Paul, very much annoyed, turned and said to the spirit, ‘I order you in the name of Jesus Christ to come out of her.’ And it came out that very hour.

19 But when her owners saw that their hope of making money was gone, they seized Paul and Silas and dragged them into the market-place before the authorities. 20 When they had brought them before the magistrates, they said, ‘These men are disturbing our city; they are Jews 21 and are advocating customs that are not lawful for us as Romans to adopt or observe.’ 22 The crowd joined in attacking them, and the magistrates had them stripped of their clothing and ordered them to be beaten with rods. 23 After they had given them a severe flogging, they threw them into prison and ordered the jailer to keep them securely. 24 Following these instructions, he put them in the innermost cell and fastened their feet in the stocks.

This morning’s reading (Acts 16: 16-24) is the New Testament reading for Morning Prayer in the Calendar of the Church of Ireland.

Taken out of context it is quite a stark reading, and it raises many questions.

As we heard in the reading at Morning Prayer yesterday (18 September 2012, Acts 16: 6-15), Paul has a vision of a man calling him to Macedonia. Paul and Silas, and some more companions sail from Troy, and arrived in Eastern Macedonia, and are staying in the Roman colony of Philippi. There the first person they met was not the man Paul saw in his vision, but Lydia from Lydia, a rich woman who makes them welcome in her household. 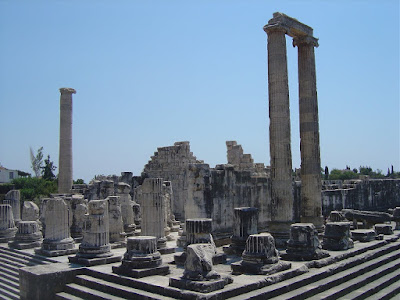 The area of Lydia was a centre of the cult of Apollo and Artemis, and one of the great Lydian temple to these twins was at Didyme, near the Lydian city of Sardis.

Lydia’s wealth, social standing and independence are unusual for a woman of her time. She and her household are baptised, and she provides lengthy hospitality for Paul, Silas, Luke and whoever else is travelling with them. The Orthodox Church gives her the title of “Equal to the Apostles.” Her home hosts the first church on what we now call European soil – in my imagination I like to think of her as the first European bishop.

Her freedom of choice when it comes to religious matters contrasts with the plight of the unnamed girl we meet in these next few verses, the slave-girl who is described in some translations (e.g. KJV) as a “damsel.” She has no wealth, no independence from men, and no freedom of religious choice.

This poor girl is possessed – the NRSV says she has “a spirit of divination.” And other people make money out of that. The Greek here is much more specific than this English translation: εχουσαν πνευμα πυθωνος, she “has the spirit of Python.”

No, she is not possessed by the humour of Monty Python. Nor has she swallowed a snake. Πύθων in Greek mythology was the name of the Pythian serpent or dragon at Pytho at the foot of Mount Parnassus. This python guarded the oracle at Delphi and was slain by Apollo (Ἀπόλλων). And so Python became one of the names of Apollo, the Greek god of light and the sun, the fine arts, music, poetry, medicine, eloquence and prophecy, the patron of shepherds and the guardian of truth. He is the son of Zeus, and in Greek mythology he dies and rises again.

The celebrated oracle at Delphi, the priestess of Apollo, was said to be inspired by Apollo. She became violently agitated during the periods of supposed inspiration and gave responses about the future that were regarded as the oracles of the god.

This possessed young woman is a minor oracle of the cult of Apollo. She is exploited by a group of men who make a pretty income from her utterances. The NRSV says her “fortune-telling” but the Greek uses the word μαντεύομαι – she is not like a fortune teller with a turban in a circus tent looking at the palms of hands; she acts as a seer, she delivers an oracle, she is a slave priestess of the cult of Apollo.

The priestesses of Apollo were said to give their answers from their bellies – the seat of emotions – while their mouths were closed.

How this oracle of Apollo behave when she confronted with the disciples of the good shepherd, the one who is the way the truth and the light, the Son of God who died and rises again?

But there is a contradiction here: if she is an oracle slave of Apollo, why is she proclaiming that Paul and his companions are the slaves of the Most High, proclaiming the way of salvation?

And I find myself asking, why does keep on doing this, for days and days on end (see verse 18)?

Why is Paul so annoyed with what she says?

Was he right to ignore her for the first few days?

Or has he become to realise her plight, the full enormity of her religious enslavement?

If she is already proclaiming, for many days, the God that Paul and Silas proclaim as the Most High God, and she is acknowledging that they are preaching salvation, surely she has already lost her value to her owners before they start blaming Paul and his exorcism?

But the, as we were reminded in the New Testament passage read in the chapel on Friday evening at the beginning of the residential weekend, “even the demons believe” (James 2: 19).

The story comes between two sets of conversions and baptisms – those of Lydia and her household (Acts 16: 15), and of the Philippian jailer and his entire family (Acts 16: 33).

(Of course, later, when Paul challenges the cult of Artemis in Ephesus he is jailed by those facing financial loss, just as he is jailed in Philippi for challenging the exploitative cult of Apollo.)

But the reading raises a number of questions for me:

Are there appropriate and inappropriate times and places for proclaiming the Gospel?

Are there times to be silent about who God is and about the Gospel?

Is there an appropriate time or place to be annoyed or irritated by what other people are saying about our ministry?

Are we aware of times when religion is used as a way of trapping and abusing vulnerable people?

Or times when religion is used for making a great deal of money for others?

Do we appreciate how sometimes other people may have to pay the price for our ministry and mission?

Do we appreciate and pray for those who suffer for the faith, sometimes in hidden and unseen circumstances, perhaps even in the silence of their own homes?

And when people are like Lydia to us, encouraging, supporting and hospitable, do we merely accept it passively and take it for granted, or do we fully appreciate it, acknowledging that they too have an apostolic ministry?

Apart from acknowledging God most high and preaching of the way of salvation, which even this oracle of Apollo can acknowledge, how do we show our faith and the life in Christ in the way we live our own lives?

Let us pray, in the words of this week’s collect:

God,
who in generous mercy sent the Holy Spirit
upon your Church in the burning fire of your love:
Grant that your people may be fervent
in the fellowship of the gospel;
that, always abiding in you,
they may be found steadfast in faith and active in service;
through Jesus Christ our Lord. Amen.

Canon Patrick Comerford is Lecturer in Anglicanism and Liturgy, the Church of Ireland Theological Institute. This reflection was shared at the opening of a faculty meeting on 19 September 2012.