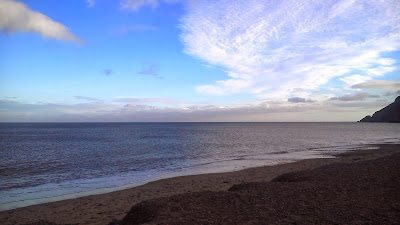 Looking towards Bray Head from the beach at Bray, Co Wicklow, this afternoon (Photograph: Patrick Comerford, 2013)

Blow, blow, thou winter wind
Thou art not so unkind
As man’s ingratitude;
Thy tooth is not so keen,
Because thou art not seen,
Although thy breath be rude.

Heigh-ho! sing, heigh-ho! unto the green holly:
Most friendship if feigning, most loving mere folly:
Then heigh-ho, the holly!
This life is most jolly.

Heigh-ho! sing, heigh-ho! unto the green holly:
Most friendship is feigning, most loving mere folly:
Then heigh-ho, the holly!
This life is most jolly.

– William Shakespeare, As You Like It, Act II, Scene VII

Shakespeare was much kinder in his attitude to winter than I am. His cheery words about winter in As You Like It have inspired the composer John Rutter. But I am happy that winter has not yet arrived with all its fierce winds and bitter freezes, and that the east coast of Ireland has thankfully escaped much of the storm that has been sweeping across the rest of Europe with great force. Indeed, at some times during this week, it has been warmer and brighter than it is in Athens.

It has been a busy week ever since last Sunday, when I preached in the morning at the Cathedral Eucharist in Christ Church Cathedral, Dublin, and took part in the candlelit Advent Procession that afternoon.

The previous day I had been at the consecration of the Most Revd Pat Storey as Bishop of Meath and Kildare, and it was such a busy weekend that I was unable to be in Wexford for the launch of the latest edition of the Journal of the Wexford Historical Society, which includes my paper on Josiah Hort, a curious 18th century Bishop of Ferns and Leighlin.

With staff on students on the steps of the chapel in Trinity College Dublin at Thursday’s commencements (Photograph: Ronnie Diffin, 2013)

Now I am facing a busy working weekend, with part-time MTh students who are in residence for the weekend. 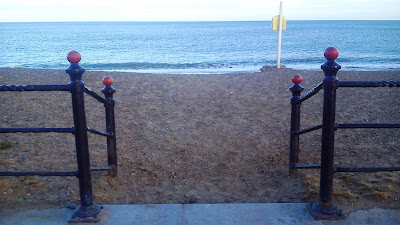 The tide was in at Bray this afternoon (Photograph: Patrick Comerford, 2013)

I was expecting to go without a walk on a beach this weekend, and so it was a real delight to be offered the opportunity to snatch a few hours in Bray, Co Wicklow, this afternoon.

The tide was in and to the east the clear blue sky and sea were particularly bright, reflecting the light from the low, slowly setting sun. The few clouds above were gentle but majesty in their slow sweeps, and seemed autumn had stretched itself almost to its limits.

We strolled through Victorian and Edwardian terraces of Bray for a while, and had coffee and sandwiches in Gusto Italiano in Goldsmith Terrace. This is an authentic Italian café, owned and run by Italians.

Doubtless, winter is eventually going to close in and the “green holly”.will be announcing that Christmas is near. But today it was refreshing to have a reminder of the Mediterranean, by the beach and in Gusto Italiano, before getting back to work in the late afternoon. 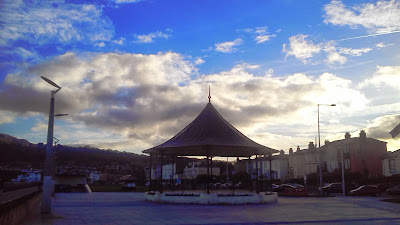 Autumn-like clouds and sun above the bandstand beside the beach in Bray this afternoon (Photograph: Patrick Comerford, 2013)

Posted by Patrick Comerford at 22:48 No comments:

Art for Advent (6): ‘The Feast of
Saint Nicholas’ by Jan Steen 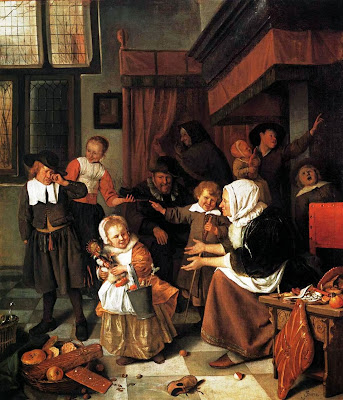 ‘The Feast of Saint Nicholas’ by Jan Steen

Today [6 December 2013] is the Feast of Saint Nicholas, the fifth century Bishop of Myra who is the inspiration for our Santa Claus stories at Christmas-time.

Steen painted at least six pictures of the Feast of Saint Nicholas, the festival traditionally dedicated to Dutch children. This painting is the Rijksmuseum in Amsterdam was painted ca 1665-1668, and measures 82 x 70.5 cm. Jan Steen was a Dutch contemporary of Jan Vermeer. While Vermeer focussed primarily on scenes with women in idyllic settings, Steen chose domestic scenes that show a less perfect and more realistic picture of daily life.

On the eve of the feast, 5 December, Saint Nicholas comes to the Netherlands from the sea to leave gifts in the shoes of children. He gives the good ones cakes, sweets, and toys, while his faithful companion Black Poet gives the naughty ones colas and canes.

In this morning’s painting, a complicated play of diagonals helps bind the family of 10 together – from the heap of special pastries to the man pointing to the chimney on the right, through which Saint Nicholas arrived in the house, and from the carved table covered with sweets up to the girl holding the shoe with the distressing birch-rod.

Figures leaning in one direction are balanced by those leaning in the other; foreground and background, right and left are held together by gestures, glances, and expressions. The smiling boy who points to the shoe invites me as the onlooker into in the intimacy of the family by smiling directly out at me.

The focal point of this painting is the youngest daughter in the family, a golden-haired child in a golden smock. We can imagine she has behaved all year, and Saint Nicholas has rewarded her by stuffing her shoe with a doll and other treats, which she carries in a bucket.

The girl provides a stark contrast with her elder brother, who stands to her right. He is sobbing, while another brother looks on, laughing. Apparently, the elder brother has been naughty, and his shoe, held up by an elder sister behind him, has been left empty.

And yet there is hope for the sobbing boy. Unknown to him, hidden in the background and obscured by the curtains, the children’s grandmother seems to be calling him. Perhaps she is hiding a gift for him too behind those curtains.

While the children’s mother attempts to coax the golden girl to show her gifts their father, sitting in the centre of the painting, seems to smile as he remembers his own childhood on this night. Further to the right, another child is holding a baby and pointing up the chimney, while a younger child looks on in wonder, as he has probably just been told that this is how Sinterklaas comes into the house.

In the lower right corner of the painting, we see a basket of assorted traditional Christmas sweetmeats such as honey cake, gingerbread, waffles and nuts, and apples. On the left, the apple and the coin refer to an old tradition of giving hidden apples and coins as presents. A cake leans against the table and marks the special occasion.

But are there any religious meanings from the 17th century in this painting?

The child near the chimney holds a gingerbread man in the shape of Saint Nicholas, a symbol of the struggle between Dutch Catholics and Protestants, an example of Catholic devotion to the saints that was not approved of by Protestants at the time. Indeed, in the 17th century, the baking of these saintly figures, especially Saint Nicholas, was forbidden in some cities.

Almighty Father, lover of souls,
who didst choose thy servant Nicholas
to be a bishop in the Church,
that he might give freely out of the treasures of thy grace:
make us mindful of the needs of others
and, as we have received, so teach us also to give;
through Jesus Christ thy Son our Lord,
who liveth and reigneth with thee,
in the unity of the Holy Spirit,
one God, now and for ever.