Staying for a weekend in the former
Wolseley estate in Tullow, Co Carlow 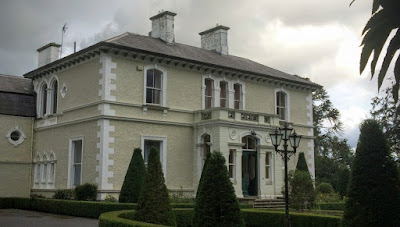 After the weekend wedding in Donard, Co Wicklow, and Lisnavagh House, Co Carlow, I stayed overnight in Mount Wolseley on the edges of Tullow, Co Carlow, for part of last weekend [16-17 September 2016].

I had a brief visit to Mount Wolseley once before, but that was four years ago [7 May 2012], on a day I was looking at the church in Tullow said by some architectural historians to have been designed in the 1830s by AWN Pugin (1812-1842).

Mount Wolseley House is the ancestral home of the brothers Field Marshal Viscount Wolseley, one of Britain’s most important military leaders, and Frederick York Wolseley, in whose Birmingham factory the first British-designed car was built in 1895. But I was interested in returning to Mount Wolseley and seeing the house and estate that had once been the home of a branch of the Wolseley family from Wolseley in Staffordshire, half-way between Lichfield and Stafford for other reasons.

I have had a long interest in the history of the Wolseley family. Wolseley is in mid-Staffordshire, between Stafford and Rugeley, north of Lichfield. The coats-of-arms of the Comberford and Wolseley families are inverted reflections of each other, and the families were related by marriage in the 16th century. Woseley and Comberford are about 20 miles apart, and one of my earliest contracts as a freelance journalist was to interview Sir Charles Wolseley of Wolseley for the Lichfield Mercury and the Rugeley Mercury over 40 years ago.

The first of the Wolseley family to come to Ireland was William Wolseley from Wolseley, who fought alongside King William III at the Battle of the Boyne. He later bought the 2,500 acre estate of Mount Arran from Charles Butler, Earl of Arran, and renamed it Mount Wolseley. When William Wolseley died unmarried, the estate passed his nephew Richard Wolseley, who was MP for Carlow (1703-1713) and a younger brother of Sir William Wolseley, 5th Baronet, of Wolseley, Staffordshire.

Tradition says that groups of trees in the parkland surrounding Mount Wolseley were planted to depict the positions taken up by the Duke of Wellington’s troops at the Battle of Waterloo in 1815. Mount Wolseley was rebuilt half a century later by Sir Thomas Wolseley in 1864.

Probably the most famous of all the Wolseleys was Frederick York Wolseley, who, along with Herbert Austin, created the world’s first mechanical sheep shears and in 1895 started producing one of Britain's most famous car marques – the Wolseley. The name dominated the British motor industry for eight decades until 1975, when the last car was produced with the famous Wolseley name. 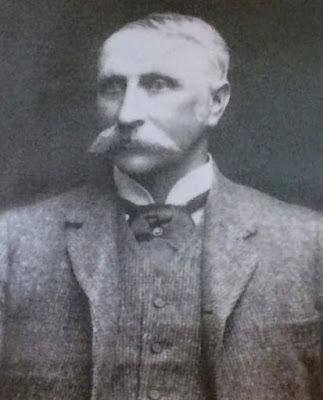 Meanwhile, the Wolseleys’ Irish title of baronet began to pass out in ever-widening circles of distant cousins. The eighth baronet, the Very Revd Dr Sir John Wolseley (1803-1890), was Dean of Kildare (1859-1890) when he inherited the title on 16 October 1889. He only held the title for three months, and died on 26 January 1890. In all five successive holders of the title died without heirs. Meanwhile, the Mount Wolseley estate was sold for £4,500 in 1925 by Sir John’s daughters to the Patrician Brothers, founded in Tullow in 1808 by Daniel Delaney, Bishop of Kildare and Leighlin. 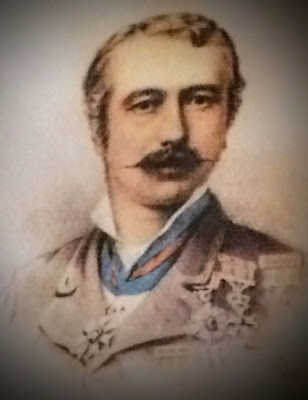 The tenth baronet, Sir Reginald Beatty Wolseley (1872-1933), was the son of a Dublin doctor. He inherited the family title when his cousin died in 1923, but he never used his title. Instead, he sought anonymity in self-imposed exile, working as an ‘elevator boy’ at the Black Hawk Bank Buildings in Waterloo, Iowa, for 18 years, and living as plain Dick Wolseley.

That is until his secret came out in May 1930. His mother’s dying wish was to visit Sir Reginald and persuade him to return to England. A day after her arrival in Iowa, Sir Reginald married his mother’s nurse, Marian Elizabeth Baker, a woman 18 years his junior. The day after their marriage, Marian returned to England on the understanding that he would follow her.

But the new Lady Wolseley realised that Sir Reginald was too set in his ways and that he was unwilling to move. He claimed he had taken the title and married her out of gratitude for the way she had cared for his mother. ‘I took the title for my wife,’ he said, ‘on marrying her out of gratitude for what she did for my mother. The title will be of advantage to her in English society. A lady is a lady over there.’

He obtained a divorce on the grounds that his wife ‘harassed him’ with telegrams trying to persuade him to return to England. However, she was not going to give way too easily. She returned to Iowa and in January 1932 she persuaded him to move, their divorce was annulled and Sir Reginald and Lady Wolseley moved to England.

Sir Reginald died a few months later in Devon on 10 July 1933. Only a few villagers attended his funeral in Berry Harbour; 12 farmers carried his coffin, and his wife was dressed entirely in white. Lady Wolseley, who became a Justice of the Peace, died on 20 June 1934.

Meanwhile the title passed to yet another distant cousin, the Revd Sir William Augustus Wolseley (1865-1950), who had succeeded as 11th baronet. He was educated at the school run by the Revd Dr Charles William Benson in Rathmines and at Trinity College Dublin. He was a curate in parishes in Limerick and Kerry for short spells before moving to Australia, and was a Vicar in Australia for many years before returning to England in 1920. When he succeeded to the title at the age of 68, Australian newspapers described him as ‘a rather eccentric clergyman, notorious wherever he went for the prodigious rate at which he preached.’

When the 11th baronet died at the age of 84 died in 1950, a title that had once been held by family members in various positions in the Church, the army and the diplomatic service, passed to another distant cousin, a cobbler from Cheshire. He had been earning £5.10s a week, and became the 12th baronet as Sir Garnet Wolseley. At the time, he was living in a four-room flat in Bromborough, Cheshire, was earning £5.10s a week and rode on a bicycle to work in a backstreet shop each day.

The new Sir Garnet’s wife, Lillian Mary Ellison, had been a telephone operator in Liverpool, and they lived ordinary working-class lives in post-war England until a genealogical quirk transformed them into international curiosities as Sir Garnet and Lady Wolseley.

The Wolseley lineage had become so distant and dispersed that Debrett’s Peerage began an international search for an heir to the title. It seemed the heir would be a very distant cousin and two Americans vied for the title, Noel Wolseley, of Manchester, New Hampshire, and Charles William Wolseley, of Brooklyn, New York. The search seemed to be reaching a conclusion when a widow living in Wallasey near Liverpool, Mary Alexandra Wolseley (née Read) claimed the title on behalf of her son, Garnet Wolseley, a 35-year-old shoemaker.

It was soon discovered that her late husband was descended from a line in the family that many had thought had died out in the 19th century. Experts from Debrett’s examined the competing claims. The American contenders were ruled out, and the quiet, pipe-smoking cobbler became the 12th baronet of Mount Wolseley, Co Carlow.

On 12 August 1950, the new baronet had married Lillian Ellison in Wallasey Town Hall in Cheshire. They had known each other for 12 years, since they worked together in a grocery shop in Wallasey. Overwhelmed by their new status, which brought them no wealth, property or privilege, they emigrated in June 1951 to Canada, where Lady Wolseley’s uncle, Andrew Ellison, lived in Brantford.

‘In Canada, I hope to live the life of a lady,’ she said. But they soon found there are few class distinctions in Canada and they became merely objects of curiosity. They moved from one address to another, and Sir Garnet, who liked to be known as George, worked as a press operator at Cockshutt Farm Equipment and later as a gardener at the city parks department until his retirement in 1979. Lady Wolseley worked for a while at Bell Telephone and then at a sweet shop. Sir Garnet died in Canada on 3 October 1991; Lady Wolseley died at Brantford General Hospital at the age of 94.

Today, the presumed 13th baronet is Sir James Douglas Wolseley from Texas, who was born in 1937. But he has not successfully proven his succession, his name is not on the Official Roll of the Baronetage, and officially the title is considered dormant since 1991.

The Wolseley family of Mount Wolseley is not forgotten in Tullow. In Saint Columba’s Church, the Church of Ireland parish church in Church Street, the Wolseley family is remembered in monuments and windows. The church was designed by Thomas A Cobden (1794-1842), the architect who worked mainly in Co Carlow and Co Wexford. His works include the Roman Catholic Cathedral, Saint Mary’s Church of Ireland parish church, and the Scots’ Church, the Presbyterian church in Carlow. He also designed Duckett’s Grove, Ballykealy House, near Ballon, and Wells House, Co Wexford, which he built for the Doyne family. His octagons in Saint Columba’s Church, Tullow, and in Carlow Cathedral recall the octagon tower in Ely Cathedral, which also inspired Pugin’s design for the chapel at the Loreto Convent in Rathfarnham, Dublin.

Some monuments from the earlier churches in Tullow survive inside the present church, including a memorial erected in 1745 to General Clement Nevill, who fought at the Siege of Derry and carried the colours for William of Orange at the Boyne in 1690. He was a nephew of Sir Charles Wolseley of Wolseley, Staffordshire, and of Mount Wolseley. The stained-glass East Window, telling the story of the Sermon on the Mount, was erected in 1907 by the Wolseley family to commemorate Sir John Richard Wolseley, who died in 1874, and his wife Frances, who died in 1907. 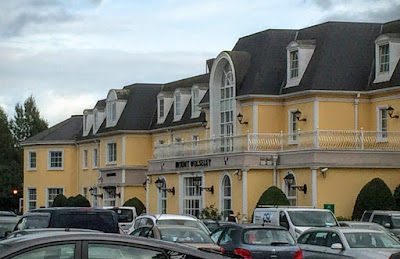 In 1994, Mount Wolseley was bought by the Morrissey family and it has since been developed into a four-star hotel. Today, the house and gardens are private, and remain the home of the Morrissey family, but can be viewed in the near distance from the entrance gate beside the hotel.

Last year, the High Court restrained Donal and Breda Morrissey, the former owners of Mount Wolseley Hotel Golf and Country Club, from building a fence across the first and second fairways just days before a major golf tournament. They continue to live in the original Wolseley family home at Mount Wolseley House, while the hotel and the grounds are now owned by Lismard Properties and Enterprises.

One wing of the hotel includes Aaron’s Lounge, a name that comes from a misunderstanding of the the name of Mount Arran, first given to the estate by the Butler family, Earls of Arran, in the late 17th century. The name of Frederick’s Restaurant is a tribute to Frederick York Wolseley, who designed one of the most famous cars in motoring history.

However, as the estate was developed over the past 20 years, the replica site of the Battle of Waterloo was turned into an 18-hole championship golf course, and the Duke of Wellington’s battle plan can no longer be traced in the greens, fairways and the willow-lined ponds. 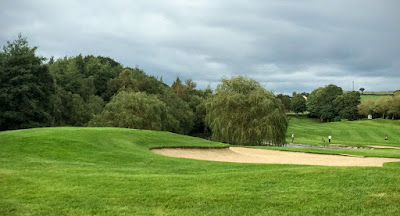 The trees on the Mount Wolseley estate were originally planted to represent the Duke of Wellington’s battle plan at the Battle of Waterloo (Photograph: Patrick Comerford, 2016)