Kilkenny is in danger of losing unique
mediaeval and renaissance monuments 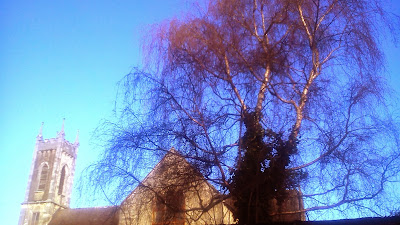 Saint Mary’s Church is hidden away behind the Thosel in a narrow laneway linking High Street and Kieran Street (Photograph: Patrick Comerford, 2014)

I am still deeply worried about the continuing deterioration and vandalism at Saint Mary’s Church, Kilkenny, which I visited yesterday morning [4 February 2014] with a small group of clerical colleagues.

Saint Mary’s dates back to the 13th century and has gone though many changes over the centuries. It is tucked away behind the Tholsel, with its arcaded entrance, in a narrow side street that links the High Street with Shee Almshouse and Kieran Street. Despite the deterioration of many of the buildings, the laneway still has great historic character and potential charm.

Today it is undergoing a renovation and restoration exercise, but the sad state of the churchyard, where many of the mediaeval and renaissance graves and tombs have been vandalised, spray-painted and smashed, and the state of interior in the midst of the present works, must cause real concern for church historians, and all who cherish our architectural and archaeological heritage.

Saint Mary’s dates back to at least 1205, when an early church was dedicated to the Holy Trinity and to Saint Peter, Saint James and Saint Nicholas. It was important enough a church by that year for Bishop Hugh de Rous of Ossory (1202-1218) to hold a church court there.

The church originally had a commodious chancel – much wider than the nave – lengthy transepts, a narrow nave and lateral aisles. The side chapels were dedicated to the Holy Trinity, Saint Peter, Saint James and Saint Nicholas.

Kilkenny Corporation maintained the church, collecting an annual contribution of 4 pence from each house and a halfpenny from each stall or shop. The church and bell tower were used for meetings of the corporation, court sittings and for staging plays. Corporation meetings were held there in 1352, 1364, 1391 and 1428. Members of prominent Kilkenny civic families, including the Shees and the Rothes, were buried in the church and the graveyard.

Saint Mary’s was substantially rebuilt on 1739, after it had fallen into ruins, and parts of the 13th century building were incorporated into the new building. The original chancel formerly extended to the wall east of the Shee monuments in the churchyard, but the length has since been contracted. As we walked around the churchyard, we could still pick out signs of the alterations on the exterior of the church building. 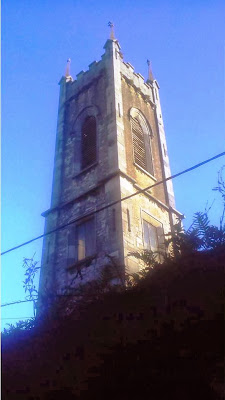 The final service was held in the church in the 1950s. Saint Mary’s was then deconsecrated and was closed for Sunday worship. The old church became a parish hall in the early 1960s, and from 1963 the Freemasons used the upper floor.

The old disused graveyard dates from at least 1337, and was used by many old Kilkenny families in the 15th, 16th and 17th centuries, so it has many, significant carved and beautiful tombs from those times.

For more than a century, the valuable graves and tombs have been left without proper care, and no-one accepts responsibility for the care of these monuments, with everyone claiming these funerary monuments are still owned by the descendants of these families.

Tools and debris left casually on the monument to Richard Rothe in the north transept of Saint Mary’s Church (Photograph: Patrick Comerford, 2014)

During renovations in the 1960s, the north transept became a monument room , housing a fine 13th-century Gothic fluted font , memorials to the Garvey, Watson, Archer, Murphy, Dunphy and Rothe families, a number of inscribed mediaeval tombstones and a stone that marked the entrance to a crypt beneath the floor. The monuments include a magnificent work commemorating Richard Rothe (died 1637).

In recent years, more and more broken pieces of endangered and damaged graves were brought indoors for safe-keeping.

In a stone screen to the right of the entrance door are six heraldic monuments of old families – Pembroke, Shee, Rothe, Kelly, Archer and Daniel – that were placed there for safety many years ago. They were originally used by these old Kilkenny merchant families to mark their homes in the heart of the old city. 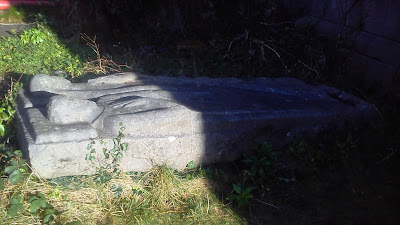 The graveyard has a number of high-status burials of these old, mediaeval civic families. This unique collection of unusual and elaborate grave slabs, includes one for William Goer and his wife Margareta, dating from ca 1350. This handsome gravestone tells us much about the costumes and clothes worn by the burgesses of Kilkenny in the second half of the 14th century.

Several important arcaded, altar-type monuments to the east of the church were probably originally housed inside the church. They include the Shee mausoleum and a number of Shee family altar tombs. 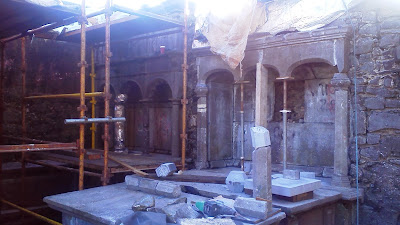 The altar tomb of Sir Richard Shee, who died in 1608, has a fine superstructure depicting Faith, Hope and Charity. Around the base are shown the 12 Apostles, the only place in the Diocese of Ossory where all 12 are present. Plans for erecting this tomb are recorded in Richard Shee’s will. He is remembered for founding Shee’s Almshouse in 1582. It is one of the few surviving Tudor almshouses in Ireland, and backs onto Saint Mary’s Lane. 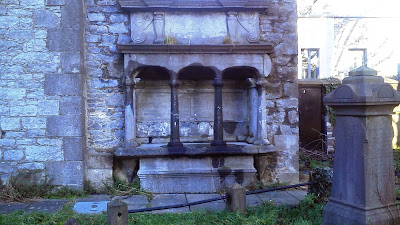 Evidence suggests that the tomb of John Rothe FitzPiers and his wife, Rose Archer, was moved to its current location in the graveyard north of the church. Their tomb was constructed in 1612 but was not used until John Rothe died in 1619. John and Rose were members of minor branches of two of the leading mediaeval, civic families. John Rothe built Rothe House in 1594. He later commissioned this tomb for himself and his wife and it was completed seven years before his death.

It is possible that his cousin, Bishop David Rothe, a key figure in the assembly that led to the formation of the Parliament of the Confederation of Kilkenny, is also buried in this same tomb.

These are some of the most important and finest Renaissance tombs and graves in Ireland, and have immense historical, social and artistic significance, giving us an important record of local important families.

However, they have suffered an unacceptable level of damage as a result of vandalism. Many have been spray-painted with graffiti, and have suffered from repeated and concerted attempts to demolish and destroy their beautifully carved columns and arcading.

The graveyard still has the potential for becoming a public park or green space in the heart of Kilkenny. But it must be a priority for the local authority to save, conserve and restore these important treasures that are a key part of our inheritance from mediaeval and Renaissance Kilkenny.

Posted by Patrick Comerford at 11:59 3 comments: