A year later, I get to find
and visit Castle Matrix 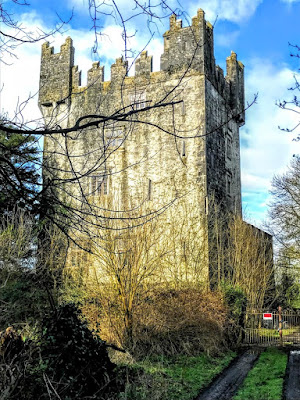 Castle Matrix was first built by the FitzGeralds, Earls of Desmond, near Rathkeale, Co Limerick, in the mid-15th century (Photograph: Patrick Comerford, 2018)

Castle Matrix on the outskirts of Rathkeale is difficult to find. Although I have been living in the Rathkeale Group of Parishes for more than I year, I have searched in vain for the entrance to the castle, time and again.

That is, until this morning.

I have spoken and lectured a number of times about the history of the Southwell family, who lived in Castle Matrix, to both the Irish Palatine Association and Rathkeale and District Historical Society.

I knew where the castle is located, but there are no signs, and although I had seen it in the distance, I had failed to find the entrance.

However, as I walked along the banks of the River Deel this morning after speaking at the school assembly, I caught a glimpse of the castle through trees still bare after winter. I decided to act on my instincts and go in search of the pathway leading up to the castle.

This was once a welcoming place, offering hospitality, entertainment, banquets and unusual bed and breakfast. But the path leading up the castle is now overgrown, and a padlocked gate bars any entrance to the land immediately in front of the castle. 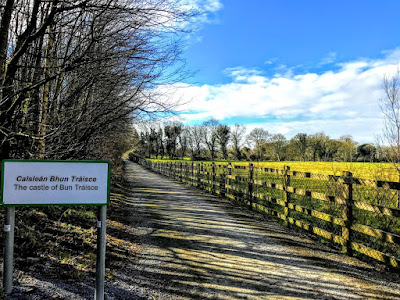 The name of Castle Matrix may be derived from the Irish ‘Caisleán Bhun Tráisce’ (Photograph: Patrick Comerford, 2018)

The name of Castle Matrix may be derived from the Irish Caisleán Bhun Tráisce, although the one sign I could find gives no explanation for the meaning of the Irish name, nor does it indicate that this is the difficult-to-find Castle Matrix.

Castle Matrix was built as a tower house in the 15th century by the FitzGeralds, Earl of Desmond.

James FitzThomas FitzGerald (1459-1487), 8th Earl of Desmond, owned Castle Matrix in 1487. He was unpopular with his servants, so they decided to get rid of their employer by murdering him. He was murdered at Rathkeale on 7 December 1487 at the age of 28, by John Murtagh, one of his servants, at the instigation of his younger brother John.

James was buried at Youghal, Co Cork,and his brother, Maurice FitzThomas FitzGerald, 9th Earl of Desmond, avenged his death by executing every servant the FitzGeralds had in Rathkeale.

In the early 1600s, Castle Matrix was granted to the Southwell family, as ‘resident undertakers.’ The Southwell family converted the castle into their manor house and added a wing in 1610. Walter Raleigh presented some Virginia Tubers to Edmund Southwell, who planted these potatoes in the land around the castle and later distributed them throughout Munster.

During the rebellions and wars of the mid-17th century, Castle Matrix captured by the Irish of Rathkeale in 1641, and fell to Cromwellian forces in 1651, when the tower was damaged by the Roundhead artillery.

But Castle Matrix was soon regained by the Southwell family, and at the Restoration King Charles II gave the title of baronet to Sir Thomas Southwell, who extended his estates in the Rathkeale area.

He died in 1680, and his son Sir Thomas Southwell (1665-1720), the second baronet, was a key figure in bringing the Palatine refugees to live in Ireland at the beginning of the 18th century. He was living in Castle Matrix when he settled 100 families on his estate at Rathkeale in 1709. Shortly before his death, he was given the additional title of Baron Southwell in 1717.

The main tower is four storeys, although there may have been another floor, and the east wall has six floors with small rooms. The looking battlements were added in the 19th century and all the windows were enlarged at this point, making the castle a comfortable house. 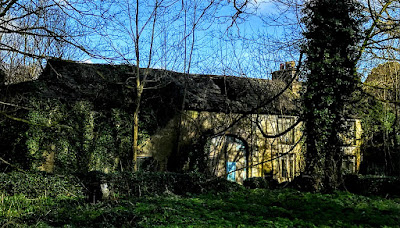 The surviving outbuildings at Castle Matric may include a 200-year-old mill (Photograph: Patrick Comerford, 2018)

Samuel Lewis writes in 1837 that the flour mill at Castle Matrix ‘has been fitted up by the proprietor J Southwell Brown esq in the most complete manner,’ and that the Elizabethan square castle was being repaired.

The Ordnance Survey Field Name Book records Castlematrix as a large two-storey house, with a new castle six storeys high adjoining. John S Brown was Lord Southwell’s tenant in Castle Matrix. In the mid-19th century, the buildings including the flour mills, valued at £90.

When the rental of the castle was being sold in 1853, Castle Matrix was described as having nine bedrooms, ‘besides dressing closets, bathrooms, water closets, a large dining room, drawing room and library with extensive suites of servants’ apartments, and the entire fitted up in elegant and substantial style.’ The sale included a lithograph in which the castle is described as having been repaired and added to ‘regardless of expense.’

Castle Matrix was finally sold by the Southwell family in the early 20th century, and was bought by the Johnson family, who continued to operate the mill and who lived in the castle for some decades. 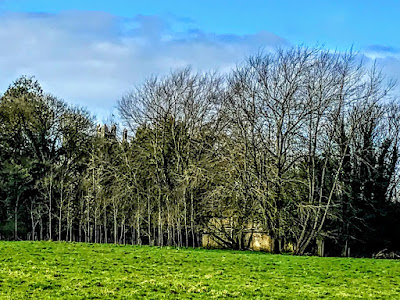 However, in the 1930s, the roof, doors and windows were removed to reduce taxes, and the castle was abandoned. By the 1960s, the castle had fallen into disrepair when it was bought by Colonel Sean O’Driscoll, an American architect who restored it to its former glory.

In April 1971, to great fanfare and publicity, the castle opened for mediaeval banquets, similar to those in Bunratty Castle, serving meat from Castle Matrix livestock and fresh vegetables and fruit from the castle gardens and orchards, and offering entertainment included an ‘Elizabethan open-air theatre’ and music on piano and harp by candlelight.

For some decades, the 12,000-volume castle library held a collection of original documents relating to the Wild Geese, and the tower led to an old chapel with a bell.

Until 1991, Castle Matrix was open for tours and the headquarters of the International Institute of Military History and of the Heraldry Society of Ireland.

Today, however, the castle looks forlorn once again, in a sad and lonely state, hidden behind a cluster of trees at the end of an unmarked track. 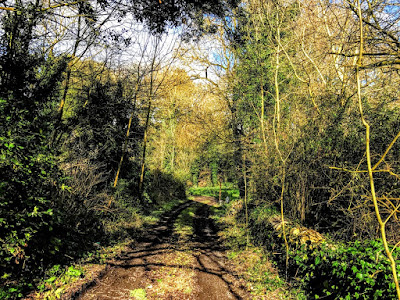 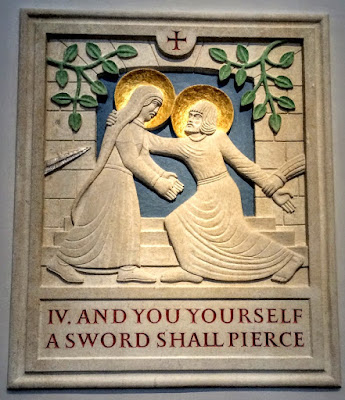