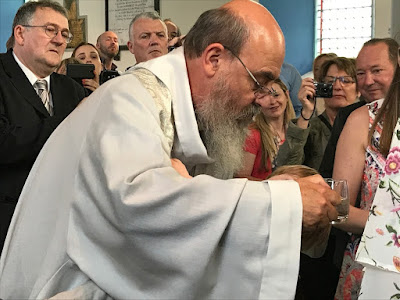 It was a busy weekend. There were two services on Sunday morning – Morning Prayer in Castletown and the Parish Eucharist in Rathkeale – with two sermons, and tea and coffee afterwards in the school in Rathkeale with people who are attending the Irish Palatine conference.

And there have been pastoral calls, sick calls, meetings with parishioners, selecting hymns, and the normal weekend work of a priest in a parish.

The Revd Michael O’Sullivan, the Unitarian minister in Cork, was in Limerick on Sunday morning, and decided to drive over to Rathkeale after his service to join us at coffee in Rathkeale, and we headed off to lunch later in the afternoon.

It is good to share experiences and the journey in ministry with clerical colleagues, and to exchange ideas with a colleague who stands your own tradition.

At the end of a busy Sunday, I am normally only fit to sit in front of the television, watching cricket or an old movie. It comes with a feeling of knowing that this sort of tiredness comes with trying to work hard at what IK am ordained to do.

Later in the day, in a conversation about the ordination to the priesthood of a former student whose dissertation I had supervised, I was remined of Stewart Henderson’s poem, ‘Priestly Duties,’ in Limited Edition.

Our expectations of ourselves as priests are not always the same as the expectations our parishioners have. We may sometimes wonder what they expect of us, how they see us, and at times they may have very different ideas of what we should be doing.

This poem is a humorous but insightful way of looking at that gap between our expectations of each other. 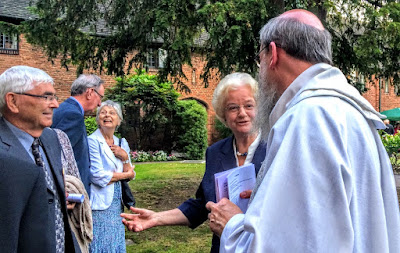 What do parishioners expect of their priests?

What should a priest be?
accessible and incorruptible,
abstemious, yet full of celebration,
informed, but not threateningly so,
and far above
the passing soufflé of fashion.

What should a priest be?
an authority on singleness,
Solomon-like on the labyrinth
of human sexuality,
excellent with young marrieds,
old marrieds, were marrieds, never
marrieds, shouldn’t have marrieds,
those who live together, those who live
apart, and those who don’t live anywhere,
respectfully mindful of senior
citizens and war veterans,
familiar with the ravages of arthritis,
osteoporosis, post-natal depression,
anorexia, whooping-cough and nits.

What should a priest be?
all-round family person
counsellor, but not officially because
of the recent changes in legislation,
teacher, expositor, confessor,
entertainer, juggler,
good with children, and
possibly sea-lions,
empathetic towards pressure-groups.

What should a priest be?
On nodding terms with
Freud, Jung, St John of the Cross,
The Scott Report, The Rave Culture,
The Internet, The Lottery, BSE and
Anthea Turner,
pre-modern, fairly modern,
post-modern, and, ideally,
secondary-modern –
if called to the inner city.

What should a priest be?
charismatic, if needs must,
but quietly so,
evangelical, and thoroughly
meditative, mystical, but not
New Age.
Liberal, and so open to other voices,
traditionalist, reformer and
revolutionary
and hopefully, not on medication
unless for an old sporting injury.

If your priest actually fulfils all of the above, and then enters the pulpit one Sunday morning wearing nothing but a shower-cap, a fez and declares ‘I’m the King and Queen of Venus, and we shall now sing the next hymn, in Latvian, take your partners please.’ –
Let it pass.

Like you and I
they too sew the thin thread of humanity.
Remember Jesus in the Garden –
beside himself?

So, what does a priest do?
mostly stays awake
at Deanery synods
Tries not to annoy the Bishop
too much
visits hospices, administers comfort,
conducts weddings, christenings –
not necessarily in that order,
takes funerals
consecrates the elderly to the grave
buries children and babies
feels completely helpless beside
the swaying family of a suicide.

What does a priest do?
tries to colour in God
uses words to explain miracles
which is like teaching
a millipede to sing, but
even more difficult.

What does a priest do?
answers the phone
when sometimes they’d rather not
occasionally errs and strays
into tabloid titillation
prays for Her Majesty’s Government.

What does a priest do?
Tends the flock through time,
oil and incense,
would secretly like each PCC
to commence
with a mud-pie making contest
sometimes falls asleep when praying
yearns, like us, for
heart-rushing deliverance

What does a priest do?
has rows with their family
wants to inhale Heaven
stares at bluebells
attempts to convey the mad love of God
would like to ice-skate with crocodiles
and hear the roses when they pray.

As priests
transformed by The Priest
that death prised open
so that he could be our priest
martyred, diaphanous and
matchless priest.