Some weekend reading on liturgy,
theology, architecture and poetry 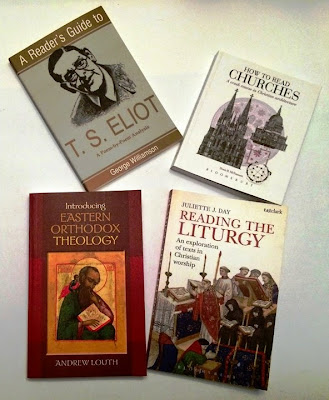 Four books for reading at the weekend (Photograph: Patrick Comerford, 2014)

I mentioned last week that after collecting my new staff card in Trinity College Dublin and sorting out by staff email after a lapse of many years, I spent some time browsing in the bookshops in Dublin’s city centre.

It is a blessing to be working so close to a good library with a good stock of theological and historical collections. But one of the problems of working so far from the city centre is not being close to good bookshops. And one of the joys of a good bookshop is browsing and rummaging so that you end up with a handful of books you had never expected to buy in the first place.

The four books I bought last week, and which I am enjoying this weekend are:

I have known Father Andrew Louth for many years. He has been a regular lecturer on the courses and summer schools organised by the Institute for Orthodox Christian Studies in Sidney Sussex College, Cambridge, and has been Professor of Byzantine and Patristic Studies in Durham University. Before that, he taught at the University of Oxford and at Goldsmith’s College, London. He is a priest of the Russian Orthodox Church, serving in a parish in Durham.

This book grew out of a series of lectures delivered in Amsterdam in 2011-2012, and will surely stand alongside Metropolitan Kallistos Ware’s classical Penguin introduction to the Orthodox Church.

While Metropolitan Kallistos takes a social and historical approach to his description of Orthodoxy, Father Andrew bases his approach on the Orthodox understanding of the encounter with God in the liturgy and in prayer. He is strongly influenced by his own knowledge and experience of patristic studies, with interesting sections on the doctrine of the Holy Trinity, the doctrine of the Creation and being human.

Juliette Day lectures in Church History and Liturgy in the University of Helsinki and at Blackfriars Hall in Oxford. She is well-known for her scholarship in the sources of Early Christian liturgy, particularly the catechetical lectures of Cyril of Jerusalem. She has studied theology at Ripon College, Cuddesdon (Oxford) and King’s College, London, and has taught liturgy at Sarum College, Salisbury, the University of Wales in Lampeter, and St Stephen’s House, Oxford.

In this book, Dr Day draws on literary and linguistic studies as she looks at the role of texts in shaping liturgy and the function of language in liturgical worship.

Like all theological disciplines, liturgy has its own hemeneutics. And, while theological students are aware of the importance of a hermeneutical understanding of the Bible, they are often less ware of the need to critically ask how liturgical texts have been redacted, edited, received and transmitted through generations of worshippers.

This is an important book too for all who want to engage with the way Common Worship in the Church of England builds on the tradition of the Book of Common Prayer rather than being a new development, and she challenges us to see more of what can be read on any written page.

Dr Denis McNamara is Director of the Assistant Director of the Liturgical Institute in the University of St Mary of the Lake, Mundelein, Illinois. In this pocket primer, he traces the development of Church architecture, going back to the Tent of Meeting, the Ark of the Covenant and the Temple of Solomon in the Old Testament, the development of the Synagogue, and the early Christian places of worship, through the mediaeval cathedrals, to postmodern architecture in the 21st century.

He also looks at non-Christian influences on church architecture, such as the Roman basilica, tholos and triumphal arch, he provides useful summaries of the classical orders and he provides the context for building styles, motifs and materials, including stone, brick, wood, metal, concrete, glass and motifs.

Next year marks the fiftieth anniversary of the death of TS Eliot on 4 January 1965. This book was first put together in 1949 when it was based on Williamson’s lectures in English literature at the University of Chicago. It was published in 1953 as part of the ‘Reader’s Guide’ series, and was designed to be read with Eliot’s Collected Poems and Four Quartets.

Williamson offers a poem-by-poem analysis of Eliot’s poems in a book that became an indispensable guide for readers, with the poems arranged in chronological order as they appear in The Complete Poems and Plays.

Posted by Patrick Comerford at 17:25 No comments: