The following editorial appeared in The Irish Times on Friday 10 January 2014:

The former president, Dr Mary McAleese, has criticised the Catholic Church for being in denial about homosexuality for decades, and has criticised Pope Benedict XVI’s writings on homosexuality, saying they contradict modern scientific understanding and the understanding of most Catholics. She must be listened to by ecclesiastical decision makers and policy framers not only as a former head of state, nor because she understands what it is to be marginalised and stigmatised, but because she is theologically engaged, intellectually and academically. Her engagement with the topic may help the Catholic Church to develop a positive attitude without abandoning tradition.

Although Pope Benedict regarded homosexuality as a “defection of human nature,” Pope Francis has an approach that is marked by compassion and understanding. In Brazil, he said: “If a person is gay and seeks God and has good will, who am I to judge?” He has called a young gay Catholic in Toulouse who had written to the pope about his inner turmoil in reconciling his sexuality and his faith. “Your homosexuality. It doesn’t matter,” Pope Francis reassured Christophe Trutino.

The Catholic Church need not abandon tradition or doctrine in order to develop and change its attitudes to gay people or its teachings on homosexuality. Instead, it may find it is engaging with a process that is timely socially and legitimate theologically. The great 19th century theologian, Cardinal John Henry Newman, described the way Catholic teaching becomes more detailed and explicit over time, so that later statements of doctrine can still be considered consistent with earlier statements. Newman argued that the development of doctrine could be consistent with Scripture and tradition, and natural and beneficial consequences can be derived from reason working on the original revealed truth, drawing out consequences that at first were not obvious.

In a similar vein, the former Church of Ireland Archbishop of Armagh, Alan Harper, once called for a proper application of traditional Anglican theological method to debates on sexuality. He suggested Saint Paul’s assumptions about what is “natural” or “unnatural” were based upon the knowledge and understandings of the time, and he argued that if science shows homosexuality is natural for some people then it would be necessary for the church to acknowledge and apply such insights. The debate he opened may have been closed by a vote in the General Synod of the Church of Ireland four years later.

But Dr McAleese shows this debate is not going away for any Christian tradition. A proper development of both tradition and doctrine need not be a threat to the credibility of any of the churches; instead, it may develop their traditions, enhance their integrity and restore their relevance. 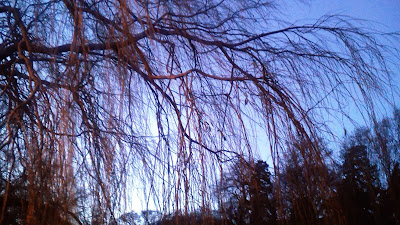 Bare branches against the blue evening sky along the banks of Dodder, with tender signs of new life (Photograph: Patrick Comerford, 2014)

The older trees look gnarled and almost skeletal after the winter storms that stripped them of almost every last green leaf.

But the skies were clear yesterday, with strong blue hues above, and the already the afternoon light is lasting a little longer, and the night skies are bright and starry.

As I set out from my office shortly before 5 yesterday afternoon, those blue skies looked deceptively bright, and I realised once again the joy of finishing the working day before daylight has completely vanished.

I strolled along the banks of the River Dodder in the bright twilight and dusk, from Rathgar as far as the mills at Dartry.

Two or three joggers were enjoying the deceptively late afternoon; two people walking their dogs took time to sit on a park bench, and it was almost as if they were basking in this January evening.

By the time I reached Trinity Hall, darkness was closing in. But even in my own back yard the small potted olive tree is beginning to show signs of Spring.

The new academic term is about to begin, and the pace of the working week is about to be stepped up. It will be Spring within the next few weeks.

In Saint Bartholomew’s Church, Ballsbridge, where I celebrated the Eucharist earlier this week (Photograph: Patrick Comerford, 2014)