An unexpected introduction
to the descendants and
family of Bishop Bedell

Bishop William Bedell of Kilmore (right) with Archbishop William Sancroft of Canterbury (left) in a window in the chapel of Emmanuel College, Cambridge … has Bishop Bedell descendants who continued to live in Ireland? (Photograph: Patrick Comerford)

William Bedell (1571-1642) was the Church of Ireland Bishop of Kilmore, one of the great ‘Caroline Divines,’ and the fifth Provost of Trinity College Dublin. He is remembered for undertaking the translation of the Bible into Irish, and for his martyr-like death during the violence and wars that eventually led to the Cromwellian era.

He was under house arrest when he died of typhus on 7 February 1642. His last words were: ‘Be of good cheer, be of good cheer; whether we live or die we are the Lord’s.’ During his funeral at Kilmore Cathedral, a large Irish military force fired a volley over his grave, crying, according to some accounts: ‘Requiescat in pace, ultimus Anglorum.’ 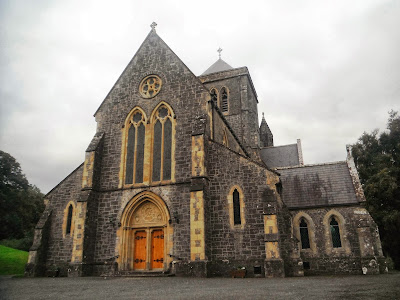 Bishop Bedell had two surviving sons, William and Ambrose, who received legacies of £80 and £60 a year each.

The eldest son, the Revd William Bedell, who was the bishop’s biographer, was born in Bury in 1613. He was ordained by his father in 1634 and became Vicar of Kinawley (Derrylin, Co Fermanagh) in the Diocese of Kilmore. He married Mary Barber from Essex, and after his father’s death, they left Ireland and returned to England. They first lived Black Notley in Essex, and then in Bury. William became was the Rector of Rattlesden in 1645, and remained there until he died in March 1671.

William and Mary Bedell had eight children, of whom the eldest, Leah, was baptised at Whepstead in 1643, and the other seven at Rattlesden: William, John, James, Ambrose, Penelope, Agnes and Isabella. The Revd John Bedell succeeded his father as Rector of Rattlesden, but died the following year, 1672.

The second surviving son, Ambrose Bedell, married in Ireland before the 1641 rebellion broke out. His wife Mary was a daughter of Peter Hill, Sheriff of Co Down. After the Restoration, he had a grant of lands in Co Cavan and Co Antrim. He died there in 1683, and had no surviving children. 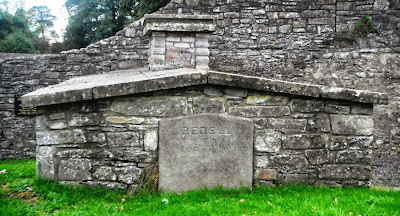 When I wrote a biographical sketch of Bishop Bedell for the site ‘Dead Anglican Theologians Society’ back in 2012, I said at the time, ‘It appears there are no longer any living descendants of the bishop.’

But I was wrong.

William Bedell was born at Black Notley, a mile outside Braintree in Essex, and some days ago I was contacted by David Grice, who lives near Braintree, and who is interested in Bedell’s earlier career as an Anglican priest in Venice, and who is also interested in finding Bedell’s descendants.

David Grice went to school in Queen Elizabeth’s Grammar School, where his history master was the late DP Adams, author of a history of the Comberford family and the Moat House on Lichfield Street, Tamworth (DP Adams, The Moat House and the Comberford Family, Tamworth, 1967). His schoolfriends included Archbishop Alan Harper and the Revd Stan Evans, so we found we shared many common interests.

David was sure Bishop Bedell had many Irish descendants through his eldest son, the Revd William Bedell, although William had returned to live in Essex. He pointed out that the name Bedell had continued to descend among members of the Stanford family, and he wondered whether the descendants of Bishop Bedell included the Irish-born composer Charles Villers Stanford (1852-1924) and Professor William Bedell Stanford (1910-1984), Chancellor of Dublin University and Regius Professor of Greek at Trinity College Dublin.

Genealogists must always be prepared to correct the information we present. We work on the data available at any one time, but if we come across new information, we must modify or correct how we have presented information in the past.

And so, I pursued two questions:

Did Bishop William Bedell have descendants in Ireland?

And, if so, were Charles Villiers Stanford and William Bedell Stanford among those descendants?

The youngest son of Bishop Bedell, Ambrose Bedell, married Mary, only daughter of Peter Hill, Sheriff of Down, and his wife, the sister of Randall, first Earl of Antrim. When Ambrose married, his father bought part of the lands of Carne from the Revd Martin Baxter, Vicar of Kildallan.

Ambrose Bedell made a deposition on 26 October 1642 about the Cavan rebels of 1641. He was a captain in the royalist army in Colonel Arthur Hill’s regiment until 1649, and was one of the ‘’49 Officers.’ Ambrose Bedell bought adjoining lands in Carne in 1661 from Thomas Richardson. He was the High Sheriff of Cavan in 1668. In 1682, he went to London to be touched for the King’s Evil or scrofula, and later wrote to the Archbishop of Canterbury saying his health had been fully restored. Bedell died the following year, 1683, at Cavan, aged 65, and was buried beside his father in the churchyard in Kilmore. 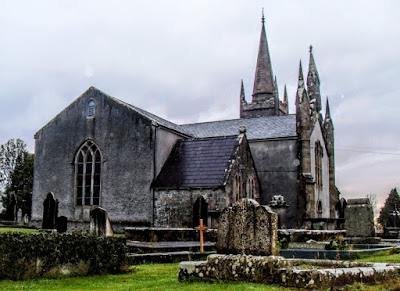 So, Ambrose Bedell’s line of descent had died out, and I began searching for descendants of his brother, the Revd William Bedell, Vicar of Kinawley, Diocese of Kilmore (1634-1637) and Rector of Rattlesden, Suffolk (1644-1670). This William’s children included a daughter:

John Stanford and Elinor (French) were the parents of three children, two sons and a daughter:

John Stanford (1761-1806), of Carn, Co Cavan, and of Gloucester Street, Dublin. He was born in Co Derry. Educated at TCD (entered 1776, tutor the Revd William Richardson, FTCD, but did not graduate). He was a Barrister-at-Law and High Sheriff, Co Cavan (1789). He married at Wexford, 22 October 1784, Barbara, second daughter of Major Loftus Cliffe, and his wife Anne, daughter of William Hore, of Harperstown, Co Wexford, MP for Taghmon (1727-1731, 1741-1746). He grandmother, the Hon Dorothy Ponsonby, was a daughter of William Ponsonby, 1st Viscount Duncannon, and a sister of the 1st Earl of Bessborough.

John Stanford died in 1806. He was the father of two sons and a daughter:

John Woodward Stanford (1825-1904), of Carn, Co Cavan, and Chetwode Priory, Buckinghamshire. He married Louise Reade, and they were the parents of five sons and two daughters:

They were the parents of one son and two daughters:

Jack Stanford, born 27 July 1888. Through his descent from the French family, he became the senior representative of the descendants of William Bedell, Bishop of Kilmore.

A memorial plaque in the chapel of Trinity College Cambridge to the composer Charles Villiers Stanford (Photograph: Patrick Comerford)

So, yes, Bishop Bedell had descendants, who eventually moved to England, New Zealand and Canada. But they did not seem to include either Charles Villiers Stanford or William Bedell Stanford.

I had to search another branch of the Stanford family to find their lines of descent.

Luke Stanford (d. 1733) and his wife Ann (Hecclefield or Hucklefield), whose son John Stanford (1686-1745), who married Elinor French, Bishop Bedell’s eventual heir, was also the ancestor of the composer Charles Villiers Stanford (1852-1924), and of a well-known clerical family.

Luke Stanford came to Ireland during the reign of Charles II. He and his wife Ann were the parents of:

William Luttrell Stanford (born 1752). He married Mary Poe. They were the parents of three sons and one daughter:

The eldest son of William Luttrell Stanford and his wife Mary (Poe) was:

William Stanford (1775- ). He was a woollen merchant at 33 Lower Sackville Street (now O’Connell Street), Dublin, and also had a family home in Co Cavan. He married Sarah Margaret McCullan (died 1846), daughter of James McCullan KC. They were the parents of three sons and a daughter:

Bedell Stanford married in 1868 Phoebe Thompson (d. 1901) of Burlington Road, Dublin, and they were the parents of an only son:

He married Susan Jackson of Albany Road, Ranelagh, in 1902, and they were the parents of four daughters and two sons:

The second son of William Stanford Stanford and his wife Sarah Margaret (McMullan) was:

He was the editor of the Christian Examiner and the Dublin University Magazine (1833-1834), and published a number of anti-Catholic pamphlets.

There were seven children in this family:

The third son of William Stanford and his wife Sarah Margaret (McMullan) was:

Charles Villiers Stamford was Professor of Music at Cambridge and composed a substantial number of concert works, including seven symphonies. His best-remembered pieces are his choral works for church performance, chiefly composed in the Anglican tradition. His students included the composers Gustav Holst and Ralph Vaughan Williams. 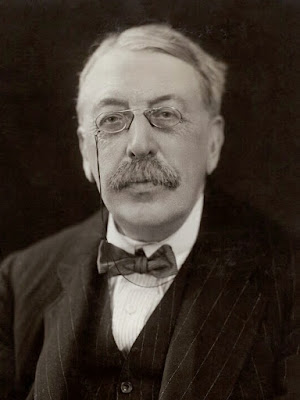 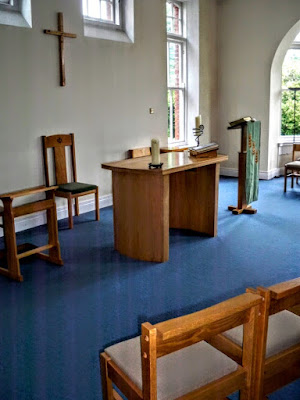 Inside the chapel in the Church of Ireland Theological Institute, Dublin (Photograph: Patrick Comerford)

This week I am offering photographs from seven churches in which I have served during my ministry. My photographs this morning (27 February 2021) are from the chapel of the Church of Ireland Theological Institute.

I started lecturing part-time in what was then the Church of Ireland Theological College in 2002, and joined the full-time staff in 2006 as Director of Spiritual Formation. From 2011 to 2017, I was the Lecturer in Anglicanism and Church History and an Adjunct Assistant Professor in Trinity College Dublin. 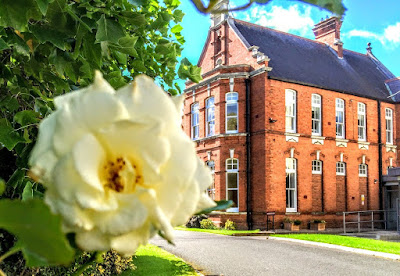 The chapel is on the ground floor of the Church of Ireland Theological Institute (Photograph: Patrick Comerford)