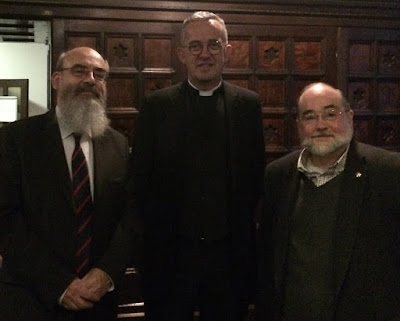 I was in Christ Church Cathedral, Dublin, yesterday [6 October 2016] for Choral Evensong, accompanied by the Dean and President of Nashotah House Theological Seminary, the Very Revd Steven A Peay, who is also Professor of Homiletics and Church History at the seminary.

Dean Peay is a canon of Christ Church Church Cathedral in Eau Claire, Wisconsin, and he his wife Julie joined me in the chapter stalls at Choral Evensong. The Preces and Responses were to settings by Bernard Rose (1916-1966) and the canticles Magnificat and Nunc Dimittis were from the Evening Service in B Minor by Charles Villiers Stanford (1852-1924).

Dr Peay is staying for a few days in Dublin at the Church of Ireland Theological Institute before travelling on to Belfast to speak at a clergy retreat in the Diocese of Down and Dromore at the invitation of Bishop Harold Miller.

Nashotah House is an Anglo-Catholic seminary in Nashotah, Wisconsin, about 50 km west of Milwaukee, situated within the Episcopal Diocese of Milwaukee. The seminary was founded in 1842 and received its official charter in 1847.

Nashotah House was founded by three young deacons of the Episcopal Church, James Lloyd Breck, William Adams, and John Henry Hobart, Jr., who were all recent graduates of the General Theological Seminary in New York City, at the request of Bishop Jackson Kemper. Gustaf Unonius was the first graduate.

Nashotah House was, from the beginning, a centre for Anglo-Catholic theology. James Lloyd Breck, the first dean, was highly committed to the principles of the Oxford Movement.

Later, noted professors such as James DeKoven brought Anglo-Catholic worship and traditions to Nashotah House, including daily celebrations of the Eucharist and the use of vestments, candles, and incense.

Dean Peay’s undergraduate study of Church History led him to the Benedictine monastic life, and he entered at Saint Vincent Archabbey in Pennsylvania in 1977. He was ordained deacon in 1981 and priest in 1982.

Following his ordination, he returned to Saint Vincent as Assistant Professor of Homiletics and Historical Theology. At the same time, he was also engaged in parish work and retreats, and was the seminary’s academic dean for five years.

After leaving monastic life in 1994, he spent 15 years in parish work in Congregational churches in Wisconsin.

His publications include editing four books, articles and reviews in the International Congregational Journal, the Catholic Historical Review, the Congregationalist, a contribution to the Encyclopedia of Protestantism and theological commentaries on the Triduum Psalmody in Feasting on the Word.

His hobbies include reading, cooking, trying to help around the garden, and music (particularly early to Baroque, English choral music, and jazz). Jean and Steven Peay were married in 1996 and he is the proud stepfather of Jeremy and Matthew.