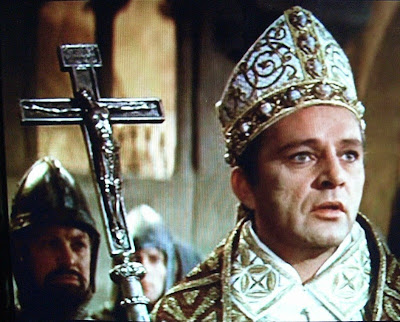 As part of my spiritual reflections for this Christmas season, I am thinking about an appropriate carol or hymn each morning. Today (29 December 2014), the Calendar of the Church of England remembers Saint Thomas à Becket, the martyred Archbishop of Canterbury.

It is 50 years this year since the release of Becket, the 1964 film adaptation of the play Becket or the Honour of God by Jean Anouilh. It was directed by Peter Glenville and produced by Hal B. Wallis, with Richard Burton as Archbishop Thomas à Becket and Peter O’Toole as King Henry II. Becket won the Academy Award for Best Adapted Screenplay, and was nominated for eleven other awards.

This morning I have chosen ‘Jesus came, the heavens adoring’ (Irish Church Hymnal, No 130), by Canon Godfrey Thring (1823-1903), which is associated with the tune ‘Saint Thomas.’ However, the tune was named with the great Dominican theologian Saint Thomas Aquinas in mind, and not Saint Thomas à Becket. How did this come about?

Godfrey Thring was born at Alford, Somerset, on 25 March 1823, the son of the Rector of Alford, the Revd John Gale Dalton Thring, and Sarah (née Jenkyns) Thring. Two of his brothers, Edward and John Charles Thring, were teachers at Uppingham School, while another brother, Henry Thring (1818–1907), became Lord Thring, a noted jurist and Parliamentary Counsel to the Treasury.

Godfrey Thring was educated at Shrewsbury School and graduated BA in 1845 from Balliol College, Oxford. He was ordained in the Church of England in 1848, and 10 years later, after his father united the benefices of Alford and Hornblotton, near Glastonbury, in Somerset by an Act of Parliament known as the “Thrings Estate Bill,” Godfrey succeeded his father as Rector of Alford-with-Hornblotton in 1858. He remained there for 35 years. He was appointed Prebendary of East Harptree in Wells Cathedral in 1876.

Godfrey Thring commissioned the architect Sir Thomas Graham Jackson (1835-1924) to build new churches at Hornblotton and Lottisham, and became, in Jackson’s words, “one of my best and most valued friends.” Jackson’s church is rich in the Arts and Crafts style and strikingly decorated. His other works include the Bridge of Sighs over New College Lane in Oxford.

Thring died on 13 September 1903 and is buried in Shamley Green, Surrey.

This morning’s hymn links the Christmas story and the Incarnation of Christ with his death, resurrection, ascension and the promise of his coming again. The tune ‘Saint Thomas’ is often said to be an 18th century melody from Essay on the Church Plain Chant (London, 1782) by the English composer Samuel Webbe.

Webbe was born in 1740 on the island of Minorca in Spain. He studied under Barbaudt. In 1766, he was given a prize medal by the Catch Club for his O that I had wings. In all, he was awarded 27 medals for his songs and compositions, including ‘Discord, dire sister,’ ‘Glory be to the Father,’ ‘Swiftly from the mountain’s brow,’ and ‘To thee all angels.’ In 1776, he succeeded George Paxton as the organist in the chapel of the Sardinian Embassy, a position he continued to hold until 1795. At the same time, he was also the organist in the Portuguese Chapel in London.

His Collection of Motetts (1792) and A Collection of Masses for Small Choirs were used extensively at one time in Roman Catholic churches throughout England from 1795.

Webbe included the tune ‘Saint Thomas’ in his Essay on the Church Plain Chant in 1782, and again ten years later in his Collection of Motetts (1792). However, Webbe may have found the tune in Cantus diversi pro dominicis et festis per annum, a manuscript now in Stonyhurst College, the Jesuit public school in Lancashire. The document probably dates from ca 1750 and is written in the handwriting of John Francis Wade (1710-1786), an English Roman Catholic who lived in exile in Douai, France.

Wade linked this tune with the hymn Tantum ergo sacramentum by Saint Thomas Aquinas, and the second part of his Benediction hymn, Pange lingua gloriosi. Wade may have composed the tune himself, or reworked an earlier tune by the German composer Heinrich Schutze in the early 17th century. But since Webbe published it the tune has been known as Saint Thomas (Webbe), or simply as Saint Thomas.

Jesus comes on clouds triumphant,
when the heavens shall pass away;
Jesus comes again in glory;
let us then our homage pay;
Alleluia, alleluia!
till the dawn of endless day.