Saint Ann’s: a city centre church
in a once fashionable parish 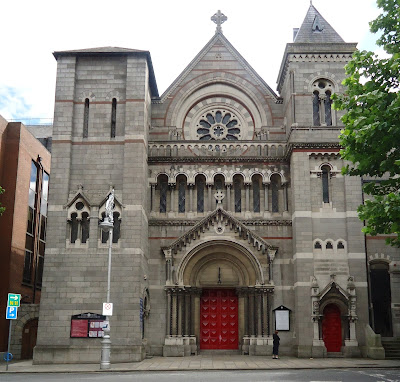 Saint Ann’s Church, Dawson Street ... the boundaries of a new Dublin parish were set out in Ac if Parliament in 1707 (Photograph: Patrick Comerford, 2013)

It was interesting to be back in Saint Ann’s Church in Dawson Street, Dublin, yesterday [Sunday 11 August 2013]. I was preaching at the main morning service, and there was a warm welcome from the parishioners.

Saint Ann’s was created as a new parish by an Act of Parliament in 1707. At the time, the suburbs of Dublin were beginning to expand in a southerly direction. On 1705, Sir Joshua Dawson bought an estate between Saint Stephen’s Green and College Park, and Dawson Street, which marked the eastern boundary of this estate, was laid out in 1701 as the main street of the new suburb.

Between them, Sir Joshua Dawson and Viscount Molesworth were responsible for creating what became some of the most fashionable streets in the city centre, including: Dawson Street (1709), Grafton Street (1713), Ann Street (1718), and Molesworth Street (1725). Dawson built his own new mansion on the east side of the street in 1710, and this later became the Mansion House, the official residence of the Lord Mayor of Dublin. He also provided a site for a new church for the new parish.

Dawson Street was completed in 1728, and as the new suburb expanded rapidly, this became a fashionable suburb, with Dawson Street attracting members of the aristocracy, the gentry, the professions and bishops, including the Archbishops of Dublin.

The Act of Parliament in 1707 delineating the boundaries of the new parish was entitled “An Act for dividing the parishes of Saint Andrew’s. Saint Nicholas Without ye Wall and the United Parishes of Saint Catherine, Saint James and Saint John’s of Kilmainham.” Its area was defined as “the ground between Grafton Street and Merryon Street, all situate or being in or near the suburbs of the City of Dublin.”

The Georgian interior was designed by Isaac Wills, who also designed Saint Werburgh’s Church (1715). Wills worked closely with Thomas Burgh, who designed the library in Trinity College Dublin at the same time as Saint Ann’s was being built. In his plans for Saint Ann’s, Willis was influenced by the new churches built in the City of London by Sir Christopher Wren after the Great Fire of 1666. 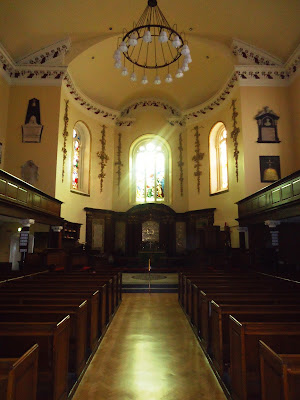 Inside Saint Ann’s during a quiet moment on Sunday (Photograph: Patrick Comerford, 2013)

The first Vicar of Saint Ann’s, the Revd Robert Howard, was instituted on 4 November 1717, and much of the church was built by January 1721.

Soon, private pews were being reserved in the church for distinguished residents such as the Duke of Leinster, the Archbishop of Dublin and the Lord Mayor. However, the two canopied pews on the north and south galleries flanking the chancel and reserved for Duke of Leinster and the Archbishop of Dublin were removed when the interior was reordered by John Welland in 1859-1860.

The original planned baroque west front never rose above the first floor. But it was replaced in 1868 by the imposing Lombardo-Romanesque façade designed by Sir Thomas Newenham Deane. His design was inspired by two churches in Rome – the baroque façade of San Giacomo in Augusta (degli Incurabili) in central Rome and Francesco Borromini’s tower at Sant’Agnese in Agone in the Piazza Navona. 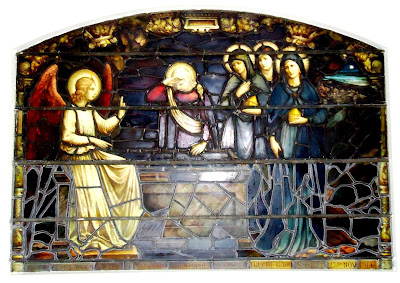 The original 18th century clear glass windows were later replaced by an interesting collection of Victorian and early 20th century stained-glass. Some windows are more notable for those they commemorate than for their quality. Yet it is said there is more stained glass per square metre in Saint Ann’s than in any other church in Dublin.

Alexander Knox (1757-1831), who is commemorated in the east window and in a mural tablet in the porch, was a well-known theologian in his day. He lived in Dawson Street and is buried in the church. He was a friend of John Wesley, and was admired by the Tractarians, including Pusey and Newman, as well as by Wilberforce. 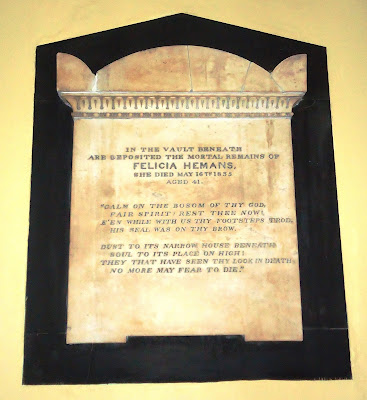 A mural tablet in the south aisle remembers Felicia Hemans and her poetry (Photograph: Patrick Comerford, 2013)

The poet Felicia Dorothea Hemans (1793-1835) is remembered in a memorial window in the chancel and in mural tablet in the south aisle. A prolific hymn-writer and essayist, she was also one of the most popular poets of her day, and is best known for ‘Casabianca’ (1823), with the opening lines:

The boy stood on the burning deck
Whence all but he had fled;
The flame that lit the battle’s wreck
Shone round him o’er the dead.

Her grandparents were Irish, and from 1831 she lived in Dawson Street with her younger brother. She was buried in a vault in Saint Ann’s.

A memorial and a window in the south gallery recall Archbishop Richard Whately (1787-1863). I enjoy the stories that say that while he was a fellow of Oriel College, Oxford, Whately tutored his students while hiking or climbing trees.

He lived in Saint Ann’s Parish, and the vicar, the Revd Dr Charles Dickinson (1792-1842), was his chaplain before becoming Bishop of Meath. Archbishop Whately attended many services in the church, but it was during his time that the canopied pew of the Archbishop of Dublin was removed from the church. He was buried in the “Royal Vault” in Christ Church Cathedral.

Bishop Dickinson’s son, Canon Hercules Dickinson (1827-1905), was also Vicar of Saint Anne’s and the Dean of the Chapel Royal.

A mural tablet in north gallery commemorates Sir Hugh Lane (1875-1915), a rector’s son and part of the Irish literary revival circle that included Lady Gregory and WB Yeats. Part of his collection of modern art formed the nucleus of the Dublin Gallery of Modern Art; other parts hang in the National Gallery. He died on board he Lusitania when it was torpedoed in 1915. 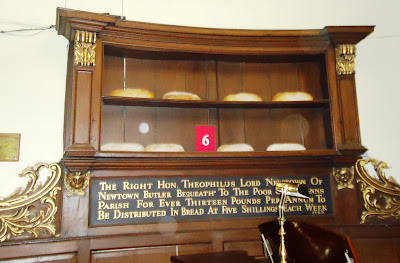 Facing me yesterday morning in the chancel, on the north side of the apse, filled with eight loaves of bread, were the Bread Shelves which since 1723 have held loaves of bread for the poor of the city under a bequest from Theophilus Butler, Lord Newton of Newtown Butler. The tradition and the charity have continued unbroken for almost 300 years later. 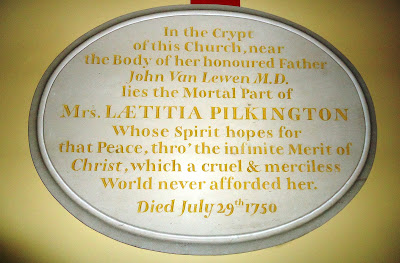 Laetitia Pilkington (1712-1750), “adventuress,” writer and wit, was once a great favourite of Dean Jonathan Swift. A doctor’s daughter, she married an impoverished, ne’er-do-well priest, the Revd Matthew Pilkington (1701-1774), Vicar of Donabate and Saint Doulagh’s. Matthew and Laetitia were divorced in 1738, and she was imprisoned for debt. Her chief claim to fame is her Memoirs (1748), published after her release from Marshalsea Prison.

Thomas Barnardo (1845-1905), the founder of Barnardo’s Homes, attended the Sunday School in Saint Ann’s as a boy. In 1867, he founded the London East End Juvenile Mission with the cardinal principle, “No destitute child is ever refused admission.”

Dr Douglas Hyde (1860-1949), the first President of Ireland, was born in Castlerea, Co Roscommon, the son of a Church of Ireland rector, the Revd Arthur Hyde.

Dr Hyde later joined WB Yeats, Lady Gregory, JM Synge and others in establishing an Irish national theatre. He was one of the seven co-founders of the Gaelic League and was its first president. He was Professor of Modern Irish in University College Dublin (1909-1932) and was unanimously elected the first President of Ireland in 1939.

Throughout his life, he was a regular parishioner of Saint Ann’s and was particularly fond of the liturgy and music in the church.

I missed the interesting monument on the south side of the gallery to William Downes (1751-1826), Lord Downes and Lord Chief Justice of Ireland, and Judge William Tankerville Chamberlain (1751-1802), who were buried together in Saint Ann’s. Their monument says they “studied together, lived together, sat together ... now lie in the same tomb.”

I am back in Saint Ann’s again on Sunday week, 25 August.

Posted by Patrick Comerford at 13:29 No comments: