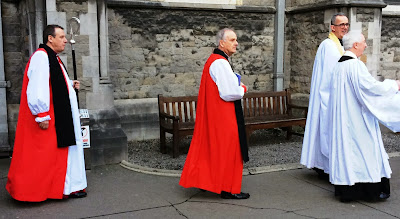 I was in Christ Church Cathedral, Dublin, this afternoon [24 January 2015] for the consecration of the Revd Canon Kenneth Arthur Kearon as the Bishop of Limerick and Killaloe.

The new bishop has been a canon of Christ Church Cathedral since 1995 and we have worked together on many projects. He has been Secretary General of the Anglican Communion since 2005, and he invited me to be chaplain at the Primates meeting in the Emmaus Centre in Swords, Co Dublin, four years ago.

In 1999, he became Director of the Irish School of Ecumenics, where I was a board member for many years. He has lectured at the Church of Ireland Theological College, and he was one of the people who guided me through the course leading to my ordination. Indeed, sitting in the chapter stalls in the cathedral, I realised that I now move into the stall he has vacated.

This afternoon also saw Methodist presidents take part in an episcopal ordination in the Church of Ireland for the first time since the decision of both the General Synod and the Methodist Conference allowing for the inter-changeability of ministry. The Church of Ireland now recognises Methodist Presidents as Episcopal Ministers, and today’s consecration marks the start of full inter-changeably of ministry between the two Churches. 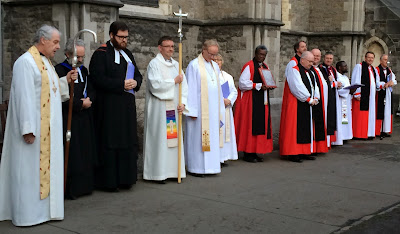 Outside Christ Church Cathedral after this afternoon’s ordination and consecration of the new Bishop of Limerick and Killaloe (Photograph: Patrick Comerford, 2015)

Later in the day, at the reception in the Radisson Blu Royal Hotel, Golden Lane, it was good to catch up with so many old friends, including Clare Amos of the World Council of Churches, Janette O’Neill, Chief Executive of Us (formerly USPG), clergy from dioceses throughout the Church of Ireland, visitors from throughout the Anglican Communion, and friends from the Irish School of Ecumenics. 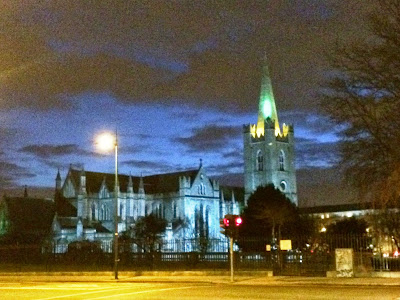