Two morning strolls through
the narrow streets of Kilkenny

I went for an early morning stroll by the river and through the heart of Kilkenny this morning after I slipped out of the River Court Hotel before breakfast to buy The Guardian and The Irish Times. After yesterday’s heavy rains, it was a bright clear morning, with stark sunlight pouring down from the south-east and a clear blue sky above.

Later in the morning, four of us went on a walking tour of the city, beginning with Shee’s Almshouse in Roseinn Street, and then moving on into Saint Mary’s Churchyard.

This churchyard has been in a sad state of neglect and decay, and despite the restoration works that have now been put in place, tools and pieces of scaffolding and working materials have been scattered across many of the graves, so that some of these Tudor and Renaissance monuments appear to be in danger of further damage rather than restoration.

The church and churchyard are now one building site, and we strolled through the graves and tombs before entering the church itself, which was badly mutilated after it had been closed as a place of Sunday worship.

The monuments in Saint Mary’s are in danger of being damaged to the point of being lost (Photograph: Patrick Comerford, 2014)

Inside, the church was carved and divided and subdivided into different rooms and halls, and now the whole building is a shambles. In the former north transept, although restoration work appears to be continuing, however slowly, the flooring has been ripped out, and equipment has been left leaning casually against many fine monuments that now appear to be in major risk of being damaged severely if not lost for ever. 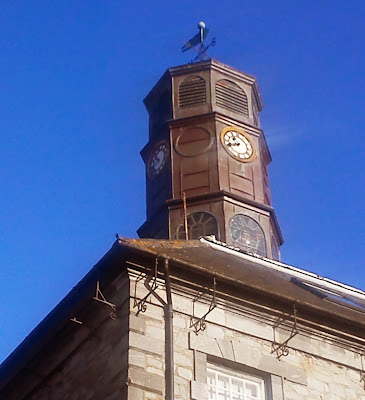 A blue sky over the Tholsel in Kilkenny this morning (Photograph: Patrick Comerford, 2014)

From Saint Mary’s, we made our way though the Tholsel, and out onto High Street, where we stopped along our way to look at The Hole in Wall, the Butterslip with the former Langton and Comerford House, the Market Slip, the site of the house once used by the Parliament or Confederation of Kilkenny in the mid-17th century, Grace’s Castle, Rothe Abbey and Smithwick’s Brewery. 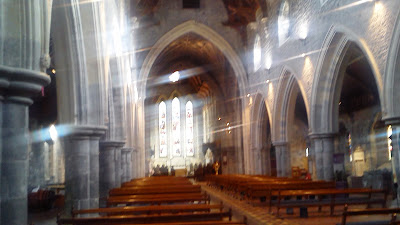 We continued on into Irishtown, and the four of us climbed the steps up to Saint Canice’s Cathedral, where we stopped beneath the Round Tower at the graves of three former bishops of Ossory – Godfrey Day, Henry McAdoo and Noel Willoughby – before making our way into the cathedral, where we received a warm welcome.

Outside the cathedral gates, we stopped briefly at the Deanery, before returning through Irishtown and back through High Street, into the Parade. Across the road from Kilkenny Castle, we made our way through the Design Centre to Butler House, and then out to Patrick Street, to see Saint Kieran’s College, one of the spending examples of Victorian Tudor-Gothic architecture in Ireland.

It was tempting to stop and brose in the book shops, but instead we ended up having lunch in one of the many cafés that now line Kieran Street, before returning to the hotel for the conference. 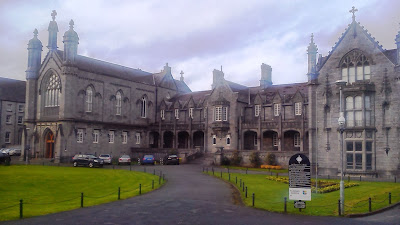