Would you know my name
If I saw you in … Barberstown? 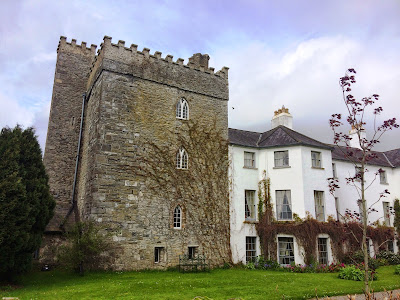 I stayed last night in Barberstown Castle near Straffan, Co Kildare, 25 km west of Dublin. I was there for a wedding reception, and awoke looking out to the castle, the castle courtyard and 20 acres of gardens that looked freshly green and aglow after the overnight rain.

Barberstown Castle has been run as an hotel since the 1970s, but dates back to the late 13th century, and is made up of four buildings from different periods in history. The castle recently had a multimillion euro make-over, and the original castle battlements now blend in with Elizabethan and Victorian extensions, with the 19th century windows in the mediaeval tower and 21st century facilities in the modern wings.

Barberstown Castle stands on the vast expanse of lands in the Straffan area that came into the possession of Maurice FitzGerald at the beginning of the Anglo-Norman presence in Ireland. The lands were granted to the ancestor of the FitzGerald families by Strongbow (Richard de Clare) in 1170-1171.

By 1250, Robert de Copella was at Straffan, and he was followed by Thomas Fanning (1275) and Sir John Fanning, who in 1288 conveyed Straffan and Ballespaddagh (Irishtown) to Richard Le Penkiston on a deed witnessed by Richard de la Salle, John Posswick and Nicholas Barby. Each of these witnesses gave his name to surrounding townlands: Sealstown (de la Salle), Possextown (Posswick) and Barberstown (Barby).

Nicholas Barby said to have built the first Barberstown Castle ca 1288-1300 on the land originally owned Maurice Fitzgerald family. The castle was built as a fortress to protect the village and people of Barberstown from the attack of the neighbouring Ui Faelain clan, who tried to burn Barberstown in 1310. 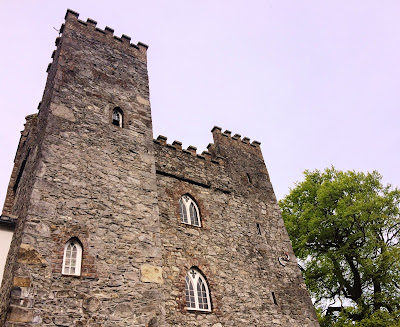 Since then, the castle has been in the middle of political struggles and local wars that have often led to changes in ownership. These struggles and wars mean Barberstown has had 37 owners since 1288, although many proprietors went to extreme lengths to hold on to the castle. 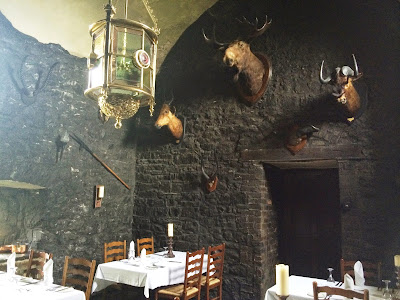 Inside the mediaeval tower in Barberstown Castle this morning (Photograph: Patrick Comerford, 2015)

Barberstown was still owned by the Penkiston family in the 14th century, nut was owned by Suttons in the 15th century. The Sutton family was living at Barberstown Castle as tenants of the Penkiston family in 1473, built the castle tower, which measures 8 metres by 7 metres, with walls that are 1.4 metres thick. The walls of the castle keep slope inwards as a defensive measure, and the rooms on the upper floors of the castle, reached by a 53-step staircase, are larger than those on the ground level because their walls are thinner.

The tower has a north-west facing entrance and a corner stair turret that projects west. There is an added battered base and a projecting latrine turret at the south-west corner.

The Gaynor family built the Elizabethan house attached to the castle in the 16th century. But the Sutton family appears to have returned to the castle, for in 1630 William Sutton owned the castle and the population of Barberstown was then 36.

In 1660, the castle was granted to John King, Lord Kingston, who had been a general in Cromwell’s army but then supported the restoration of Charles II to the throne in 1660, when he was given a peerage. But after James II came to the throne, the Earl of Tyrconnell confiscated the castle from Robert King, 2nd Lord Kingston, in 1689. 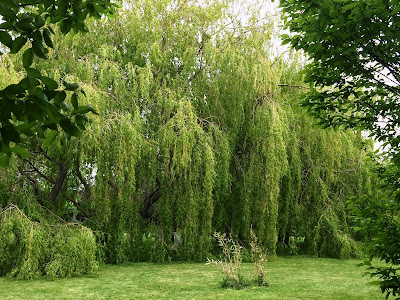 A grove of willow trees in the gardens of Barberstown Castle (Photograph: Patrick Comerford, 2015)

Vanhomrigh’s principal residence was nearby at Celbridge Abbey. He was the father of Esther Vanhomrigh (1688-1723), the Vanessa who was the focus of the passionate letters and amorous attention of Dean Jonathan Swift. She was fictionalised as Vanessa in Swift’s poem Cadenus and Vanessa (1713), in which he wrote:

Each girl, when pleased with what is taught,
Will have the teacher in her thought.

Vanhomrigh soon sold the castle, and Hugh Henry was living there in 1716. He was MP for Limavady (1713) and Antrim (1727-1743) probably built Oakley Park in Celbridge, which was an ancestral home of Archbishop Justin Welby.

Hugh Henry’s nephew, also Hugh Henry, built Lodge Park in Straffan in 1775. His son Joseph Henry matriculated from Trinity College at 13, inherited the Straffan estate, including Barberstown Castle, in 1749, and was MP for Longford (1761-1768) and Kildare (1770-1776). The Henry family’s tenants at Barberstown Castle included the Cairncross family, with Joseph Cairncross (1754) and Hugh Cairncross (1780) living there in the second half of the 18th century.

Joseph Henry is featured in many caricatures painted by William Hogarth and on display in the National Gallery of Ireland. His son John Joseph Henry gave the site for the Roman Catholic Church in Straffan in 1787. In 1801 he married Lady Emily Elizabeth FitzGerald (1778-1856), a daughter of the Duke of Leinster and a niece of Lord Edward FitzGerald.

But his extravagant lifestyle was his downfall. He was once one of the richest commoners in Ireland, but he became so embarrassed financially that he was obliged to sell Straffan and move to France. He died in 1846.

The Straffan estate and Barberstown Castlewere bought by the wine merchant Hugh Barton (1766-1844), of the wine firm Barber and Guestier. Barton built a new house, Straffan House (1828-1831), designed by Frederick Darley and based on a chateau at Louveciennes. Today Straffan House is the home of the K-Club.

Hugh Barton, who still owned Barberstown Castle in 1826, completed the last wing of the house in the 1830s. 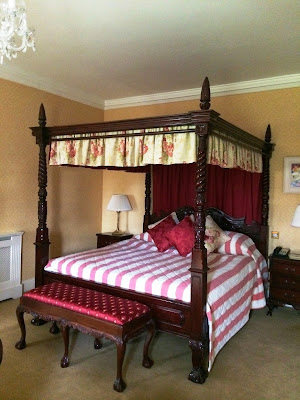 By 1836, Admiral Hercules Robinson (1789-1864) was living at Barberstown House. He was a son of the Revd Christopher Robinson, Rector of Granard, Co Longford, band a grandson of Sir Hercules Langrishe of Knocktopher Abbey, Co Kilkenny.

Admiral Robinson fought alongside Admiral Nelson at the Battle of Trafalgar in 1805, and from 1817 to 1820 he commanded the Favourite on the Cape of Good Hope and St Helena station. He was High Sheriff of Co Westmeath in 1842. His son, Sir Hercules George Robert Robinson (1824-1897), was Governor of South Africa and became Lord Rosmead in 1896.

Later residents of the castle included Edward Smith (1842) and a Mr Littleboy (1881). Sandham Francis Symes was living there in 1901 and 1918. His wife Lavinia died at Barberstown Castle in 1918 and was buried in Mount Jerome Cemetery, Dublin. He died on 15 July 1942. But by then Robert Huddleston was living in the castle.

By the mid-20th century, however, the castle became too expensive to maintain as a private family home and the Huddleston family sold Barberstown Castle. A Mrs Trodd was there in 1971, and by 1973 Mrs Norah Devlin converted the castle into an hotel.

Eric Clapton bought the castle in 1979, the year he married Pattie Boyd. He was then pursuing a solo career following the breakup of Cream, which included Ginger Baker and Jack Bruce, and of Derek and the Dominoes. He lived in the old tower for some time before selling it to the current owner, Ken Healy, in 1987.

I must be strong
And carry on,
’Cause I know I don’t belong
Here in heaven ...

During renovations in 1996, an underground tunnel was discovered, leading from the castle to the parish church in Straffan. This is thought to be a “priest’s hole” dating back to the Penal Times.

The names of all the previous owners of Barberstown Castle are painted on the hotel’s bedroom doors. I was staying in a room named after Mrs Norah Devlin, but the room next to me was named after Eric Clapton.

I enjoy much of Eric Clapton’s music but I have found his views on Enoch Powell, racism, immigration and foxhunting too extreme and beyond the limits of acceptability. Perhaps it was better that I woke up in the next room this morning. 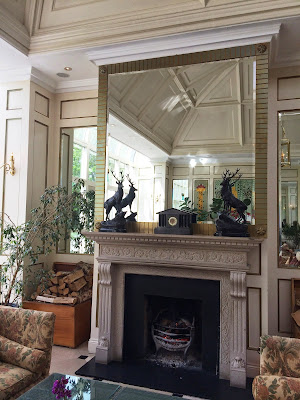