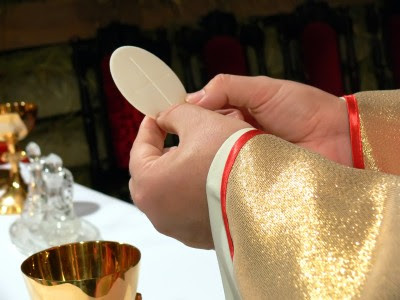 My choice of a Poem for Easter this morning is ‘Easter Communion’ by Gerard Manley Hopkins (1844-1889), the English Jesuit poet, who is often associated with Dublin because he taught at Newman’s Catholic University.

During his time in Ireland, Hopkins was a regular visitor to Monasterevin, Co Kildare, between 1886 and 1889, and this town became one of his few sanctuaries in Ireland. He stayed there on at least seven occasions, as the guest of the Cassidy sisters and, although he was free of any pastoral duties, he said Mass in the oratory, occasionally assisting the parish priest, Father Michael Comerford (1830-1895), at the Holy Communion.

Norman White of University College Dublin has recalled many conversations on politics and history between Hopkins and Comerford, who had recently published a three-volume history of the Diocese of Kildare.

Michael Comerford, who was a cousin of my grandfather, was Parish Priest of Monasterevin from 1878, and Coadjutor Bishop of Kildare and Leighlin from 1888. He was consecrated bishop in Carlow Cathedral on 1 January 1889; Hopkins died later that year in Newman House, Dublin, on 8 June 1889.

Hopkins never gave permission for the publication of his poetry, and his Poems, edited by his friend, the poet laureate Robert Bridges, was not published until 1918.

This morning’s poem was written in 1865, when Hopkins 21 and still an Anglican, and a year before he was received into the Roman Catholic Church by Cardinal John Henry Newman.

Pure fasted faces draw unto this feast:
God comes all sweetness to your Lenten lips.
You striped in secret with breath-taking whips,
Those crooked rough-scored chequers may be pieced
To crosses meant for Jesu’s; you whom the East
With draught of thin and pursuant cold so nips
Breathe Easter now; you serged fellowships,
You vigil-keepers with low flames decreased,

God shall o’er-brim the measures you have spent
With oil of gladness, for sackcloth and frieze
And the ever-fretting shirt of punishment
Give myrrhy-threaded golden folds of ease.
Your scarce-sheathed bones are weary of being bent:
Lo, God shall strengthen all the feeble knees.