Among poets, butter maids
and missing earls on a rainy
day in Newcastle West

The Square, at the heart of Newcastle West, on a wet March afternoon (Photograph: Patrick Comerford, 2017; click image for full-screen view)

In the middle of a heavy shower of rain at the end of last week, I found myself in Newcastle West, Co Limerick. This is the largest town in Co Limerick apart from Limerick City, and the home of the poet Michael Hartnett and of Ballygowan Water.

I have set out to visit each of the towns within the Rathkeale and Kilnaughtin Group of Parishes, and I wanted also to visit the local hospital. However, the rain was so heavy that afternoon, that I saw little of the town, and did little more than stroll through the square and by the river, and find a suitable café for a double espresso.

But even in this short visit I realised that there is much to appreciate in the history of this town. Ballygowan Water is said to have its source at the site of a holy well used in mediaeval times by the Knights Templar.

The town is built on the banks of the River Arra which flows into the River Deel, and grew up around the castle built by the FitzGeralds of Desmond. The castle ruins and the Desmond Banqueting Hall are the dominating historical feature of the down and dominate the south end of the Square. 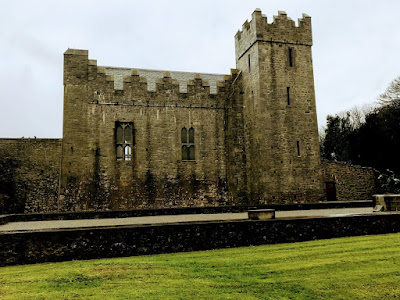 The castle was built by the FitzGerald family who arrived at the end of the 12th century. The castle was probably built as a centre and a rallying point in the Geraldine territory of West Limerick, and it was about equal distance from the outline ring of manors at Askeaton, Croagh, Castletown, Abbeyfeale, Glin and Foynes.

Thomas died at Newcastle West in 1307 and his body was taken to Tralee, where he was buried alone. The castle gave its name to the town that grown up slowly around the castle walls. although the town was sacked in 1302 and destroyed in 1315.

Gerald FitzGerald, the poet and third Earl of Desmond, died here in 1398. He was imprisoned by the O’Briens in Ennis, and accounts of his death are shrouded in myth. Some legends say he was slain in Lough Gur and that he and his followers now live in a castle beneath the water of the lake, where his ghost can be seen once every seven years. Most stories, however, say he died in the castle.

The castle was surrendered in 1569, and after the Desmond rebellion was suppressed and the last Earl of Desmond was murdered in Kerry in 1584, the vast estates were divided. The castle at Newcastle West and a large amount of surrounding land were granted to Sir William Courtenay, of Powerham in Devon, in 1591.

The castle was captured again in 1598 by James FitzGerald, the 16th ‘Sugan’ Earl of Desmond, but was recaptured in 1599 and was regained by the Courtenay family, who became the Earls of Devon.

In the late 16th century, Sir William Courtenay held 42 sq km (10,500 acres) of land in Newcastle West. It said locally that he was a Roman Catholic, and the family home was reputed to have had a room in which priests were hidden.

William Courtenay was denounced in the House of Commons in 1624 as a recusant. Two decades later, the castle was surrendered in 1643 after a four-month siege by the Confederate Catholics and was burnt. It is unlikely that anyone lived in the castle after then. The agents of the Courtenays lived in old castle house, beside the castle, which was probably built around 1700. In time, the Courtenay family became significant landlords in the area, owning up to 85,000 acres in south-west Limerick, the remaining lands of Newcastle West, and the surrounding countryside known as the Devon Estate for generations.

His son, William Courtenay (1768-1835), 3rd Viscount Courtenay, was a notorious rake who was living in exile in Paris by 1831. He was gay and had been hounded out of polite society in England. Because he had no sons or brothers, it was expected that when he died his title of viscount would become extinct, while his title of baronet would pass to a third cousin, another William Courtenay (1777-1859), who was MP for Exeter and the eldest son of Henry Courtenay, Bishop of Exeter.

Alfred Furlong, who was the Courtenay agent in Newcastle West in the early 1840s, lived at the castle. The Curling family took over in 1848 and Edward Curling, his son, Charles Edward Napier Curling and his grandson, Richbell Curling, were successively land agents to the Devon estate.

The Curlings were last family to live at the castle. They were the last agents of the Courtenays in Newcastle West, from 1848 until the break up and sale of the estate. When the estate was divided, they bought the castle and some of the surrounding land from the Earl of Devon.

The castle was partly restored in the last 20th century and the surviving remains include two 15th century banqueting halls, the Desmond Hall and the Great Hall. The castle is open to the public for guided tours from May to September, and the hall is a cultural centre and a venue for recitals, concerts, lectures and exhibitions. The castle demesne covers more than over 0.4 sq km (99 acres) of parkland, with many forms of flora and fauna as well as playing areas and sports fields. 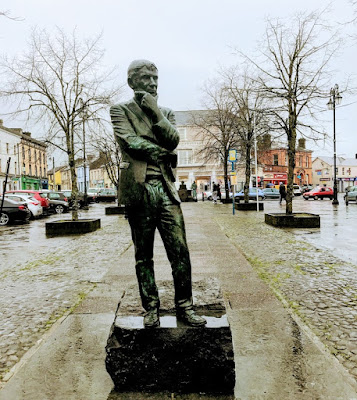 At the south end of the square, the bronze life-size statue facing the castle of the poet Michael Hartnett (Michael O hAirtneide) is the work of Rory Breslin and was unveiled in 2011 by Paul Durcan. 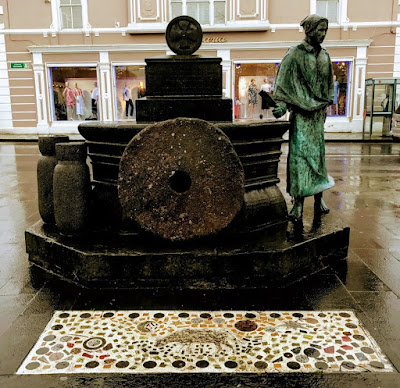 At the other end of the square, the ‘Cailín Deas Crúite na mBó’ or ‘Ella the Buttermaker’ is a sculpture by Cliodhna Cussen, installed in 2005 to commemorate the town’s butter market. The cast-bronze statue shows a milk maid with butter pats in her hand. There is a tooled stone mill wheel to front elevation, and tooled limestone milk churns to the side.

From the Square, we walked down Bridge Street to the banks of the River Arra and the Bridge of Tears, at the south of the town, at the junction of the Dromcollogher Road.

This free-standing, triple-arch bridge was built ca 1830. It is a good example of late 18th and early 19th century engineering, with well-executed limestone arches and parapets. The surviving but unusually placed corbels once supported the framework. They were built when the bridge was being built, and provide an insight into the way this bridge was built.

The bridge is known as the ‘Bridge of Sorrows’ or ‘Bridge of Tears’ because, it is said, this was a place for final farewell. From Famine times, emigrants from all over West Limerick said their last goodbyes here before moving on to Cork for the boat journey. 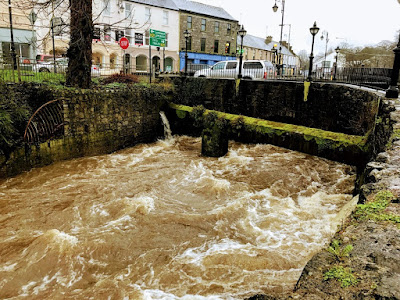 The ‘Bridge of Tears’ at the junction of Bridge Street and the Quays in Newcastle West (Photograph: Patrick Comerford, 2017)

Downstream along the Quay, an iron footbridge crossing the River Arra was built by Edward Curling, the landlord’s agent in 1848-1874.

Across the river from the iron footbridge, the Roman Catholic Church of the Immaculate Conception was built in 1828 when local landlord, William Courtenay, who would become the 10th Earl of Devon, donated the site.

Meanwhile, the 13th Earl of Devon, his brother and his grandsons, the 15th and 16th Earls of Devon, were ordained priests in the Church of England and sometimes Rectors of Powderham. The family still lives at Powderham Castle and the present holder of the title is the 19th Earl of Devon.

The story of the Courtenay family and how they convinced the House of Lords to recognise them as the rightful Earls of Devon is worth telling in full another day. 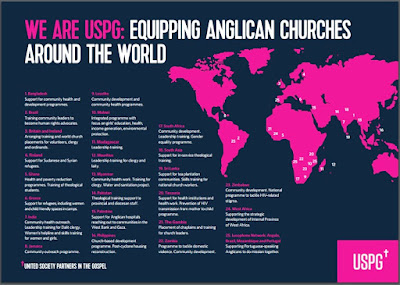 This week, from Sunday (5 March) until tomorrow (Saturday, 11 March), the USPG Lent Prayer Diary follows the topic ‘Introducing Discipleship.’ The topic is introduced in the Prayer Diary in an Article by the Revd S Balasundram, a priest in Colombo, Sri Lanka, who is training with the USPG-funded Asian Theological Academy.

Give thanks for the global church as we seek to support one another to live authentic lives in God.