Age shall not weary them,
nor the years condemn 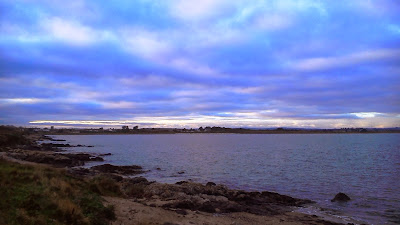 Looking out across the beach at Portrane in the late afternoon (Photograph: Patrick Comerford, 2013)

I was a little late – almost a fortnight late, to confess. It’s almost two weeks since Remembrance Day, but I went to Portrane this afternoon to visit my grandparent’s grave in Saint Catherine’s, the old Church of Ireland churchyard, and I honoured my grandfather’s memory, placing a small wooden cross with a poppy on the grave.

I bought this poppy cross in the Cathedral Bookshop in the Close in Lichfield earlier this month, and recalled my grandfather’s ordeals during World War I when I preached on Remembrance Day in the Chapel of the King’s Hospital, Palmerstown.

Once again, this afternoon, as I looked at my grandparents’ gravestone, I thought of how sad it is that he is given the wrong age at the time of his death. Stephen Comerford was born on 28 December 1867, and died on 21 January 1921 at the age of 53. But this gravestone says he died at the age of 49 – the age he was when he came back from the war in 1916. As his health deteriorated as a consequence of the malaria he contracted in Thessaloniki, he had remained 49 for ever in my grandmother’s heart. 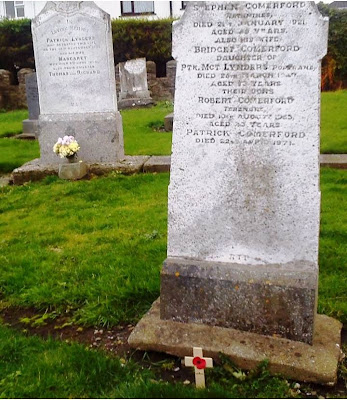 A Poppy Cross on grandfather’s grave in Portrane this afternoon (Photograph: Patrick Comerford, 2013)

As the ‘Ode of Remembrance’ says:

They shall grow not old, as we that are left grow old:
Age shall not weary them, nor the years condemn.
At the going down of the sun and in the morning,
We will remember them.

I spent some time in the late afternoon first looking out at the sea at the Burrow Beach in Portrane, and then at the rocks and waves at Tower Bay, and out to Lambay Island.

At the going down of the sun, I was on the beach at Donabate. The colours of the skies, the sea and the sands changed in each moment, and I stood for a while alone watching the scene before me move from golden browns to misty blues. 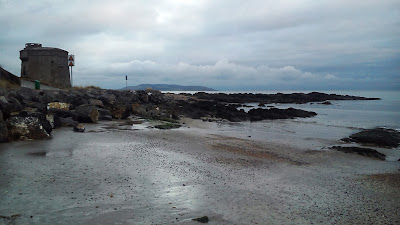 The colours on the beach at sunset in Donabate … 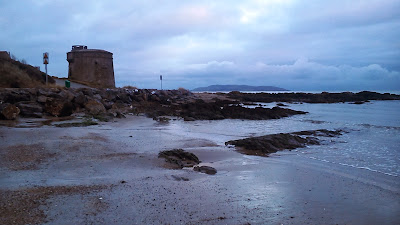 …changed and changed again in the twinkling of the eye this evening (Photographs: Patrick Comerford, 2013)

Later, two of us returned through Drumcondra and the city centre, and we stopped for coffee in 46HX, a new café that opened beside the Hospice in recent months.

Finally, we stopped at Marianella, the Redemptorist House in Rathgar, to pay tribute to Father Alec Reid, the peace-broker, who died yesterday.

When you go home
tell them of us and say,
for your tomorrow
we gave our today.

Posted by Patrick Comerford at 20:48 No comments: