Two Turkish paintings and a glimpse of the Whirling Dervishes 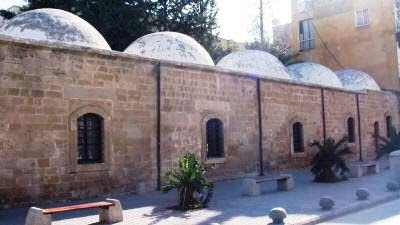 The domes of the former Mevlevi tekke in Nicosia

Twelve years ago, in April 2000, I was working briefly in Cyprus. I was there as a journalist, and took a welcome break during the Greek Orthodox celebrations of Easter. There were many reminders of that working visit during the Easter celebrations this month, but there are two prints on my wall at home that also remind me of a unique experience during my time in Nicosia.

As I strolled through the walled city of Northern Nicosia, near the Kyrenia Gate, I came across the six intriguing and eye-catching domes of the Mevlevi Tekke. I was on my own as I pushed open the door and found myself in a fascinating building that dates back to the 17th century and that was once was an important cultural centre during the Ottoman era in Cyprus.

The tekke was built on land donated by Emine Hatun, but may stand on the site of an earlier tekke built by Arabs.

The Mevlevi order was founded by the Sufi poet Mevlana Celaleddin Rumi, who was born in 1207 in what is now Afghanistan. While he was still a boy, his parents moved to Anatolia and settled in Konya. There he studied under his father, and at the age of 24 became a professor of history, theology and jurisprudence.

The mystical philosophy that Rumi expresses in his poetry emphasises the individual soul’s separation from God during earthly existence, and the power of Divine Love to draw the soul back to the infinite on death. Rumi also saw music and dance as expressions of this mutual love and yearning, and the Mevlevi order became known over the centuries for the whirling ceremony that made its devotees known as the “Whirling Dervishes.”

The Mevlevi tekke or Mevlevihane in Nicosia became the centre of the Sufi tradition Cyprus and it is said that the Mufti of Cyprus, who came from Konya in 1607, was also the first Sheikh of the Mevlevihane.

Ataturk ordered the closure of the tekkes in Turkey in 1925, and the centre of the Mevlevi order moved from Konya to Aleppo in Syria. However, the British administration in Cyprus allowed the tradition to continue on the island, and it was not until the death of the last sheikh in 1954 ended that an end came to the whirling dervishes and their sacred dance in the Mevlevihane in Nicosia.

The tekke finally closed in 1961, and later became a museum with exhibits of calligraphy, Ottoman imperial edicts and weapons as well as costumes of Mevlevi dervishes and tombstones.

Although most of the original tekke was demolished to make way for a shopping centre in the 1970s, parts of it survive, including the semahane, where the dervishes performed their dance.

I entered the semahane through an arched doorway to find a room that is divided by a series of arches into two sections. The first room contains an exhibition of Rumi’s best-known poem, the Mesnevi. The second room contains the mihrab or niche indicating the direction of Mecca. The oval-shaped floor on which the dervishes danced is lower and along one wall is a balcony where the musicians once performed.

A doorway next to the mihrab was slightly ajar, and as I pushed it open I found myself in a chamber beneath the six domes I had seen from the street, with row-upon-row of the tombs of the sheikhs of the Mevlevi order. In all, there are 16 tombs, each topped with a sculpted turban and covered in embroidered textiles bearing quotations from the Quran.

Over the following years, during visits to Turkey, I bought two pictures that are still on my wall at home and that remind me of that surprising visit to the tekke in Nicosia. Both are copies of paintings by the famous Turkish artist, Osman Hamdi (1842-1910): The Dervish in the Tomb of a Şehzade and The Turtle Trainer, both recognised as Turkish masterpieces.

Osman Hamdi was an Ottoman statesman, intellectual and art expert, and also a prominent, pioneering Turkish painter. He was also an accomplished archaeologist, and is considered as the pioneer of the museum curators’ profession in Turkey. He was the founder of Istanbul Archaeology Museums and of Istanbul Academy of Fine Arts, known today as the Mimar Sinan University of Fine Arts.

Osman Hamdi was the son of Ibrahim Edhem, a former Grand Vizier who was a Greek boy from the island of Chios who orphaned at a young age when his parents were murdered in 1821 during the Greek struggle independence. He was adopted by Kaptan-I Derya Husrev Pasha and eventually rose within the ranks of the Ottoman ruling class.

Osman Hamdi went to school in the Beşiktas quarter of Constantinople before studying law in Istanbul and Paris. However, he abandoned law, turned to painting, trained under the French orientalist painters Jean-Léon Gérôme and Gustave Boulanger, and exhibited three paintings in Paris in 1867.

He carried out archaeological searches in Nemrut Dağı in south-east Anatolia, at Lagina in south-west Anatolia, and Sidon in Lebanon. The sarcophagi he discovered in Sidon, including the “Alexander Sarcophagus,” are among the great archaeological finds, and his work led to the foundation of the Istanbul Archaeology Museum, which opened in 1891 under his directorship.

Throughout his career as a museum and academy director, Osman Hamdi continued to paint in the style of his teachers, Gérôme and Boulanger. 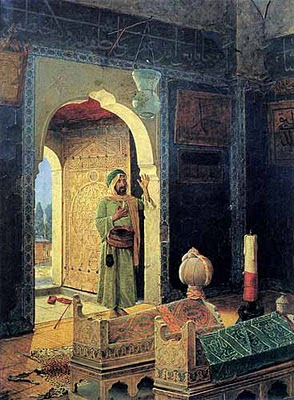 The Dervish in the Tomb of a Şehzade, by Osman Hamdi

The first painting, The Dervish in the Tomb of a Şehzade (Şehzade Türbesi’nde Derviş), was painted by Osman Hamdi in 1908, two years before his death.

This painting, with its tomb, doors, wall tiles, lamps, Turkish-Islamic architecture and decoration reminds me of the tekke in Nicosia, but is set in the Şehzade Mosque (Şehzade Camii), sometimes known as the “Prince’s Mosque” an Ottoman imperial mosque in the Fatih district on the third hill of Istanbul.

The Şehzade Mosque was commissioned by Sultan Suleiman I in memory of his eldest son Prince Mehmet. The title Şehzade means prince and Şehzade Mustafa Muhlisi (1515-1553) was the Prince of Manisa (1533-1541) and then Prince of Amasya (1541-1553). He was the first-born son of Suleiman the Magnificent and Mahidevran (Moon of the Time), and was the heir apparent heir to the Ottoman throne.

However, Prince Mustafa had problems in his relations with his father, who was more interested in Mehmet, the eldest son of Hürrem Sultan and the younger step-brother of Prince Mustafa. Suleiman created more opportunities to the younger son and seemed to be preparing him for the throne. When his brother Mehmet died, the sultan transferred his favour to another brother of Mustafa, Bayezid.

Prince Mustafa successfully ruled Amasya for 12 years, but there were three princes in Anatolia with the potential of being the new Sultan. Roxelana (later Hürrem) prepared a conspiracy to overthrow Mustafa, and when Mustafa entered his father’s tent to meet with him, Suleiman’s guards attacked Mustafa and killed him.

Mustafa’s murder caused unrest and his life and death became a part of the Anatolian Turkish literature, and the poet Taşlıcalı Yahya composed an elegy for the dead prince.

The mosque was the first major Ottoman imperial commission and was completed by the architect Mimar Sinan in 1548. Architectural historians say it Sinan’s first masterpiece of classical Ottoman architecture.

The mosque is surrounded by an inner colonnaded courtyard (avlu) with an area equal to that of the mosque itself. The courtyard is bordered by a portico with five domed bays on each side, with arches in alternating pink and white marble. At the centre is an ablution fountain (şadırvan), which is a later donation from Sultan Murat IV. The two minarets have elaborate geometric sculptures in low bas-relief and occasional terracotta inlays.

The mosque has a square plan, covered by a central dome, flanked by four half-domes. The central dome is supported by four piers, has a diameter of 19 metres and is 37 metres high. Here Sinan first adopted the technique of placing colonnaded galleries along the entire length of the north and south façades in order to conceal the buttresses.

The Şehzade complex includes the türbe or tomb of Prince Mehmet, which was completed prior to the mosque. Ottoman imperial mausoleums or türbe are noted for their lavish use of İznik tiles. An inscription in classical Persian over the door of the türbe of Şehzade Mehmet gives the date of the prince’s death and compares the interior of the türbe with a garden in Paradise. The interior is covered from the floor to the top of the dome in rare apple-green and lemon-yellow İznik tiles, and the windows have stained glass. A walnut baldachino stands over the tomb itself.

The first print is of Osman Hamdi’s painting, The Dervish in the Tomb of a Şehzade, which is 122 x 92 cm and incorporates found many elements found in Gérôme’s The Pain of Ekber.

But Osman Hamdi puts into his picture glimpses from nature outside. From the open door we can see cypress trees, part of a house and the sky. This can be interpreted as the artist saying: “The most important thing is life.” Other interesting features include the broken corner of the tomb in the front. Instead of the many, unburned, unused candles seen in other tomb pictures, Osman Hamdi has just a single, small, half-burned and dripping candle stick, which is a reference to the Fatih Law, which allowed the assassination of brothers and their children by a new sultan. 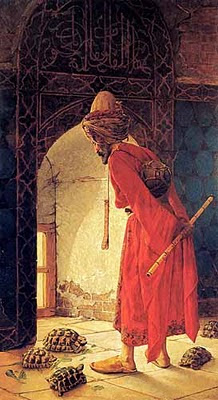 The Turtle Trainer, by Osman Hamdi

The second painting by Osman Hamdi is The Turtle Trainer (Kaplumbağa Terbiyecisi), painted in 1906. It was originally called The tortoises and the man (“Kaplumbağalar ve Adam”), but with later popularity it became known generally as The Tortoise Trainer.

The trainer is supervising three turtles eating leaves with their heads bowed, while two other turtles behind him are trying to approach to the leaves. This picture can be interpreted as a merciless, hopeless satire on his colleagues at work.

The light coming from the only, low window, which is at floor level in the room, co-ordinates all the other elements in the picture, from which all unnecessary details have been eliminated.

Osman Hamdi painted two versions of this painting, the first in 1906 and the second in 1907. The original 1906 version of The Tortoise Trainer is an oil on canvas with 221.5 x 120 cm dimensions. It broke a record in Turkey when it was sold for $3.5 million in December 2004. It was acquired by the Suna and İnan Kıraç Foundation and is on display at the Pera Museum in İstanbul.

Posted by Patrick Comerford at 06:00 3 comments: