Hiding a would-be archbishop
away from the other bishops

There was a heart-warming turnout earlier this week in Saint Michan’s Church for the relaunch of the Anglican mission agency once known as USPG (the United Society for the Propagation of the Gospel), and its rebranding as the United Society – Us.

The preacher was Africa’s first woman bishop, the new Bishop of Swaziland, the Right Revd Ellinah Wamukoya, and the Archbishop of Armagh, Dr Richard Clarke, presided at the special Eucharist.

As we were preparing arrangement in Saint Michan’s Church for seating for the choirs, the clergy and bishops, I noticed that hidden high on the south-east wall behind where some of the bishops were to be seated was an interesting monument to a unusual bishop, Samuel O Haingli.

Donngus or Donat O Haingli (Ua hAingliu), a Benedictine monk who had been a disciple of Archbishop Lanfranc of Canterbury, became the third Bishop of Dublin at “the request of the king, clergy, and people of Ireland.” On his consecration at Canterbury that year, Archbishop Lanfranc presented with rich vestments, books and ornaments for the Diocese of Dublin.

Bishop Donat died of the plague on 23 November 1095. He was succeeded as Bishop of Dublin by his nephew, Samuel O Haingli, on the nomination of the King of Dublin.

Bishop Samuel O Haingli was Irish-born but was a Benedictine monk at St Alban’s in England. In Winchester Cathedral, on the Sunday after Easter, 27 April 1096, he was consecrated Bishop of Dublin by Saint Anselm, who had succeeded as Archbishop of Canterbury in 1093. Saint Anselm is regarded as the founder of scholasticism, and has had a major influence on Western theology as the originator of the ontological argument for the existence of God.

Bishop Samuel returned to Ireland, but soon after his arrival proved to be a turbulent bishop. He had a particularly stormy relationship with Christ Church Cathedral, and was rebuked sternly by Saint Anselm as Archbishop of Canterbury for his expulsion of the monks of Canterbury from Christ Church and for removing the books, vestments and ornaments belonging to Christ Church. 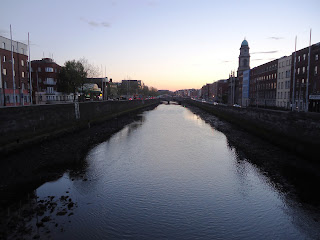 Across the river at Saint Michan’s, they wonder whether Bishop Samuel was trying to turn Saint Michan’s Church into a rival cathedral by ejecting the monks from Christ Church and taking their treasures, although this is not recorded.

The explanatory note below the bishop’s monument in Saint Michan’s Church notes a further record of Saint Anselm’s displeasure with Bishop Samuel. The Archbishop of Canterbury learned that the Bishop of Dublin was pretending to be an archbishop, and that Bishop Samuel insisted on having an archbishop’s cross carried before him. However, there was little that Archbishop Anselm could do to discipline or reprimand Bishop Samuel for his activities in Dublin.

When Bishop Samuel died on 4 July 1121, he was buried in Saint Michan’s Church and his grave was marked with the stone effigy now placed high on the wall in the south-east corner of the church. 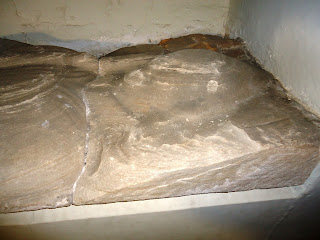 Bishop Samuel with his mitre and archbishop’s cross ... difficult to see when standing on the floor of Saint Michan’s Church (Photograph: Patrick Comerford, 2013)

Only by climbing on some chairs, I was able to see that the bishop’s effigy. This clearly shows Bishop Samuel dressed in episcopal vestments, resting his hand on an archbishop’s cross. This depiction shows that the occupant of the grave once marked by this effigy was an Archbishop of Dublin. Even in death, Bishop Samuel wished to be remembered as Archbishop Samuel. His successor in the Diocese of Dublin, Bishop Gregory, was the first to be given the title of archbishop.

Even the appointment Archbishop Gregory may have been controversial at the time. He was only a sub-deacon when he was nominated as Bishop of Dublin in 1121. He was hastily ordained priest by Bishop Roger of Salisbury in September 1121, and was then consecrated Bishop of Dublin on 2 October 1121 in Lambeth by Archbishop Ralph of Canterbury.

On his way back to Dublin, he attended the consecration of Tewkesbury Abbey, he remained Bishop of Dublin for over 30 years, and only became Archbishop of Dublin when he received the pall from the Papal Legate, Cardinal Paparo, at the Synod of Kells in 1152. 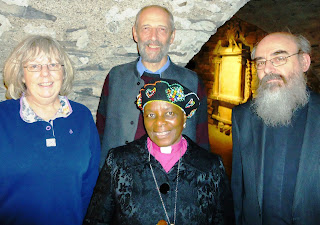 With Bishop Ellinah Wamukoya of Swaziland and Jeanette O’Neill and Canon Edgar Ruddock of Us in the crypt of Christ Church Cathedral on Thursday morning (Photograph: Garth Bunting, 2013)

Having preached in Saint Michan’s, I brought Bishop Ellinah to Christ Church Cathedral on Thursday morning, and explained how the cathedral and Saint Michan’s have a happier relationship today. 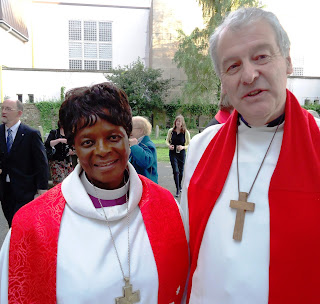