Sunset and sunrise in Rethymnon 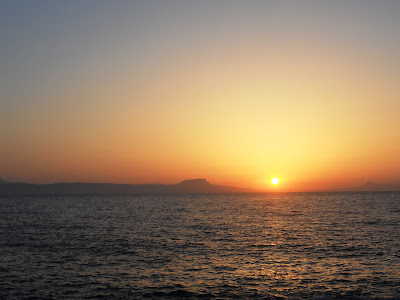 Watching the sunset at the Sunset Taverna beneath the Fortezza in Rethymnon (Photograph: Patrick Comerford, 2012)

Like some early-morning ecclesiastical “Battle of the Drums,” the bells of the cathedral and the churches began ringing over the rooftops of Rethymnon early this morning.

The birds had started singing God’s praises much earlier as the sun began to pour out over the streets and the squares of the old town this Sunday.

At first there was a short peal here, a quick burst of ringing over there. Then some more – as if they were now competing, one with another. And then there was a final crescendo, as if they were talking to each other in a dialogue of rhythms, praising each other’s celebration of the common liturgy being celebrated in each holy place on this holy morning. 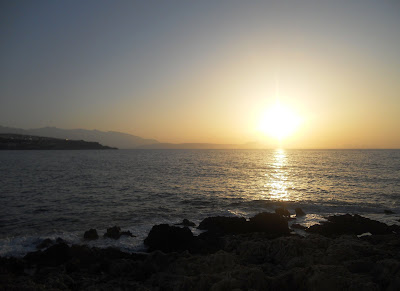 Watching the sunset at the Sunset Taverna ... a pleasure for diners and a traffic risk for waiters (Photograph: Patrick Comerford, 2012)

As the evening sun began to set yesterday [Saturday], we walked beneath the slopes of the Fortezza to the edge of the old town for dinner at the Sunset Taverna.

We sat at a table on the terrace above the rocky shoreline, and ate as we watched the hour-long drama of the sun setting somewhere beyond Chania.

The waiters had a difficult time crossing the street with food and wine – all part of the drama. Later, after strolling through the side streets and alleys of old town, we finished our meal underneath the vines and the summer flowers of the pergolas at Diporto.

This taverna is in a Venetian building dating from 1500, opposite the Leo Hotel in Vafe Street, a narrow, nostalgic laneway between Arkadiou Street and Soliou Street.

.
Posted by Patrick Comerford at 06:13 No comments: