Finding some photographs from an
old Orthodox monastery in Bucharest 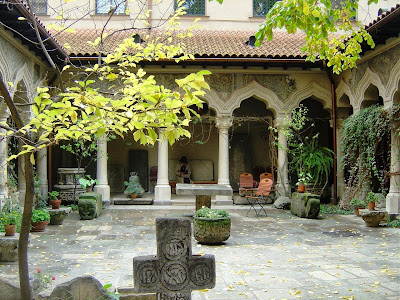 Recently I was going back over some old photographs that had been on another computer. I thought they had been lost and were irretrievable, and so it was with joy that accidentally came across a collection of photographs from a visit on a Sunday six years ago to Stavropoleos Monastery (Mănăstirea Stavropoleos) in the centre of Bucharest [28 October 2007].

Stavropoleos Monastery or Stavropoleos Church (Biserica Stavropoleos), standing on the corner of Stavropoleos Street and Postei Street, is close to the central area of Lipscani, and is one of the oldest buildings in the Romanian capital. 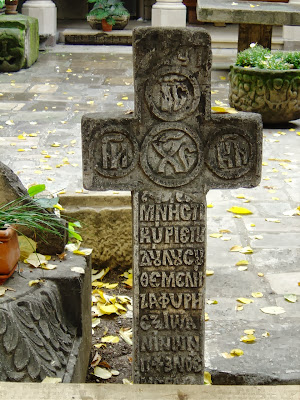 A cross in the courtyard with the inscription: ‘Remember Lord your servant Themelis Zaphyris from Ioannina, 2 November 1743’ (Photograph: Patrick Comerford)

The church is dedicated to the archangels Saint Michael and Saint Gabriel. However, the name Stavropoleos is a Romanian version of the Greek Σταυρούπολις (Stavroúpolis), “The City of the Cross.”

Bishop Ioannikios died on 7 February 1743 at the age of 61, and was buried in the narthex of the church. Ever since, the main church of the monastery he founded in Bucharest has been known as the Stavropoleos in his honour. 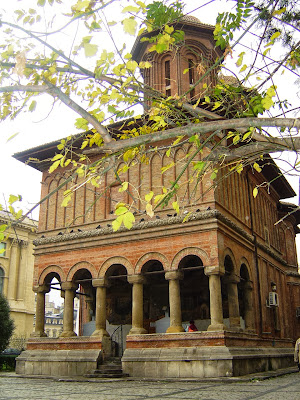 Cretulescu Church (Biserica Crețulescu) on the corner of Revolution Square, was also built in the Brâncovenesc style (Photograph: Patrick Comerford)

The monastery church is built in the Brâncovenesc style, also known as Wallachian Renaissance or Romanian Renaissance, a style that evolved in the late 17th and early 18th centuries, during the reign of Prince Constantin Brâncoveanu, when the Principality of Wallachia was still within the Ottoman Empire overlords. Brâncoveanu was a wealthy aristocrat, and built fine palaces and churches.

One of his best known churches in this style in central Bucharest is Cretulescu Church (Biserica Crețulescu) on Calea Victoriei, on the corner of Revolution Square, beside the former Royal Palace. 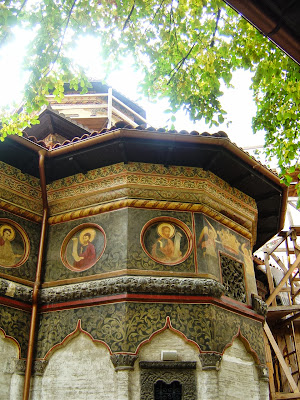 The church and the monastery are richly decorated (Photograph: Patrick Comerford)

The monastery library has over 8,000 books of theology, Byzantine music, arts and history. Some of the books are from the personal library of the Romanian art historian Vasile Drăguț, former rector of the Bucharest University of Arts.

There are patristic, biblical, dogmatic, liturgical, historical, homiletic, catechetical books, dictionaries of classic languages and textbooks, studies on Byzantine art and Orthodox iconography, and works on 18th century Romanian history and culture. There are old books in Romanian, Greek, and Church Slavonic, and the collection of books on Byzantine music, which is the largest in Romania, includes books donated by two Romanian Byzantine scholars, Sebastian Barbu-Bucur, and Titus Moisescu. The monastery is engaged in a virtual library project that involves digitalising its old books.

The monastery is engaged in a virtual library project, digitalising its old books. 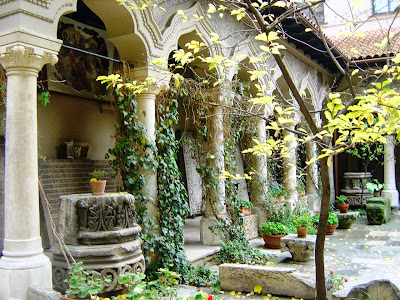 Stavropoleos is known throughout the Orthodox world for its Byzantine library and music (Photograph: Patrick Comerford)

Finding the old photographs from Stavropoleos led me to find a recording by the Stavropoleos Group of the Divine Liturgy of Saint Basil the Great, which is only celebrated ten times a year. I am now listening to it in the background as I write. 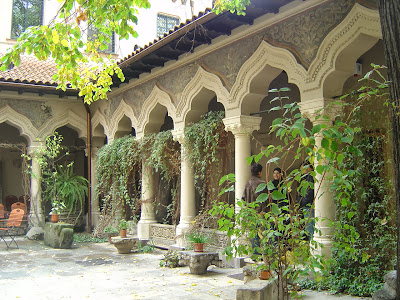 The courtyard, with its columns and cloisters, has an atmosphere of prayer (Photograph: Patrick Comerford)