Kite-surfing, swans and a late lunch at the beach 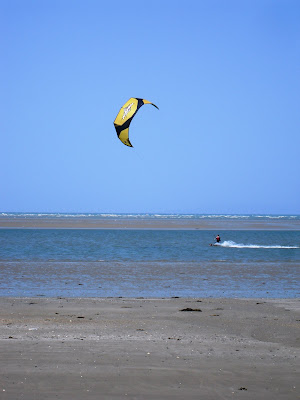 Kite-surfing on the Burrow Beach in Sutton this afternoon (Photograph: Patrick Comerford, 2011)

I was back in Phibsboro this morning for the funeral mass of my friend’s mother, and we then went to Saint Fintan’s Cemetery in Sutton for the burial, before going back to the Marine Hotel at Sutton Cross to meet the family.

Dating back to 1897, the Marine Hotel has a lawn rolling down to the shore of Dublin Bay.

As we were leaving, I noticed in one of the bars, people were sitting quietly, almost in a trance, in one of the bars with nothing to say for themselves as they watched the television coverage of the royal wedding.

But I was more captivated by a set of four prints of the Conyngham Cup at Punchestown in 1872 by the artist John Sturgess and engraved by Edward Gilbert Hester. Sturgess flourished between 1864 and 1903 and was a sporting painter, illustrator and lithographer who was the principal hunting and racing artist for the Illustrated London News for 10 years from 1875. He was also a lithographer after his own work and one of his most famous paintings was his portrait of Blair Athol, the winner of the Derby in 1864.

The four prints hanging in the bar in the Marine Hotel in Sutton illustrate: “The Start,” “The Double,” “The Stone Wall,” and “The Finish.” Below each print, the riders and horses are named with a Victorian politeness, and each print is “Dedicated to The Most Noble the Marquis of Drogheda.” The series was published two years after the race on 1 June 1874 in Dublin by Thomas Cranfield of Grafton Street and in London by Arthur Ackermann of Regent Street, and printed by T. Brooker. 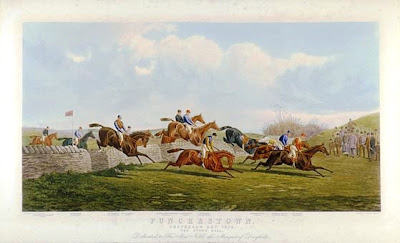 ‘The Stone Wall’ ... the third in a series of four prints by John Sturgess and EG Hester, shows “Mr Comerford” in third place but falling from his horse Chisel as they attempt one of the stone walls in race for the Conyngham Cup at Punchestown in 1872

My curiosity was raised less by the subject or the topic – I have never been to the races, at Punchestown or anywhere else – than by the fate of one of the riders. “Mr Comerford” is present at “The Start” on his horse Chisel and is still in the race at “The Double,” even though he is seventh out of ten riders. The third print, “The Stone Wall,” shows the field attempting one of the famous stone walls at Punchestown. At this stage in the race, the eventual winner, Captain Arthur Smith, lies in second place on his horse Heraut d’Armes, while, behind him, Mr Comerford experiences an embarrassing fall from Chisel. Interestingly, spectators are seen standing freely next to the jump: while stands had been built at Punchestown by this 1872, there was still a tradition of leaving the course open to the public.

In the final print, “The Finish,” we see Captain Smith riding Heraut d’Armes to a famous triumph. “Mr Comerford” is not to be seen – he must never have managed to remount at the Stone Wall. I imagine he was John Comerford, one of the founding members of the Kildare Hunt, which acquired Punchestown as a permanent location of its annual meeting. The first regular steeplechase meeting over a defined circuit was held there in 1854, permanent stands and enclosures were built in 1861, and the Conyngham Cup was established in 1862.

But I wondered: Who was John Comerford? And where does he fit into the family story?

Rather than taking advantage of the shoreline location of the Marine Hotel, two of us headed to Howth, just minutes away, with its attractive harbour and it charming old fishing village. Howth has many inviting restaurants and bars, numerous coastal walks and the added historic attraction of Howth Castle and its demesne.

However, this is the beginning of another bank holiday was weekend, Howth was crowded, and there seemed to be little opportunity for a quiet shoreline walk, and so we went back on our tracks and returned to Sutton for a quiet walk on the Burrow Beach.

Sutton is a tombolo or narrow isthmus connecting the mainland and Howth Head. The original village was located on the south-west side of Howth Head, but Sutton is now focussed on Sutton Cross, with the Marine Hotel, Superquinn and local shops.

In the past, Sutton was divided into two townlands, the Burrow and the Quarry, and there are two neighbouring beaches known as the Burrow Beach and the Claremont Beach, running to a total length of 1.2 km. The Burrow Beach, east of Sutton Golf Club and behind the Dart line and a row of elegant suburban houses, faces north towards Ireland’s Eye and Lambay Island. Because of the islands’ location and their strategic importance, the beach at Sutton suffered many attacks over the centuries, and the Vikings plundered Ireland’s Eye in 960.

There were no signs of Viking sails or marauding raiders as we walked the beach in the warm sunshine this afternoon. Instead, half a dozen people were taking advantage of the low tide and the light breeze to enjoy an afternoon of kite-surfing and kite-boarding. 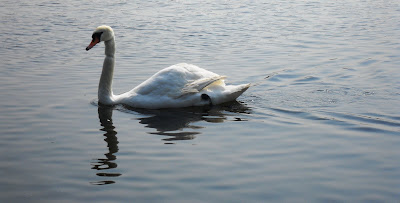 A swan in the estuary beneath the M50 bridge at Lissenhall this afternoon (Photograph: Patrick Comerford, 2011)

From Sutton, we drove north along the coast road through Baldoyle, Portmarnock and Malahide. All along the way, despite the bright sunshine and the light breeze, the water was full of white horses or small waves, coming in one after the other. From Malahide, we then drove west out on the Estuary Road, under the M50, crossed the Ward River estuary at Lissenhall, and turned back east along the north side of the estuary, passing under the M50 once again to a point at Hutchinson’s Strand – which takes its name from the Hely-Hutchinson family who once lived at Lissen Hall.

We were greeted by a colony of mute swans, visibly so used to visitors that they block the roadway in large numbers, refusing to budge even in the face of oncoming cars.

Further east, we came to Prospect Point, the location of the former stables of Lissen Hall House, with a viewing point looking across the Estuary towards Seatown House and Malahide. The estuary widens appreciably at this point, and Malahide is clearly visible across the sea. 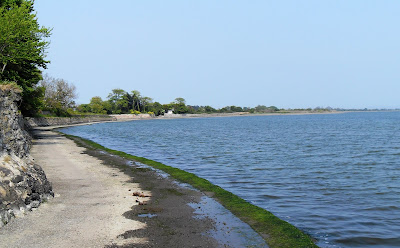 From Prospect Point, a narrow road leads north to Newport House, now the home of the actor Stephen Rea, and the Donabate/Portrane Peninsula.

The maps warn that this narrow laneway is covered by water at high tide, but we drove on, and then returned to old Dublin-Belfast Road, and headed north towards Balbriggan. At Balrothery, a sign pointed west towards Balscadden and Gormanston. I hoped to find the ruins of ancient Balscadden Church, but instead we ended back on the main Naul-Balbriggan road.

The beach at Bettystown this afternoon, beneath the Relish café and restaurant (Photograph: Patrick Comerford, 2011)

We drove back into Balbriggan and went further north through Gormanston and Julianstown to Laytown and Bettystown, where we eventually stopped for a very late lunch in Relish. This is one of my favourite restaurants and – in the middle of Bayview, a terrace of houses perched on top of a sandbank – it has spectacular and breath-taking views of Co Meath’s “gold coast” and out to the Irish Sea.

A roasted Mediterranean vegetable basket on a bed of Moroccan couscous with melted goat’s cheese, sweet chili and pesto dressing, a crab and prawn tart, side servings of garlic bread and potatoes, a bowl of olives, a glass of white wine, a double espresso and a mocha came to about €35.

We still had time to step down onto the beach, where the tide was still out but once more the water was displaying ripple after ripple of white horses. On the beach, a few people were land-kiting and kite-surfing. There is a still a promise of summer in the air, and by the time I got back to south Dublin the setting sun was forming a beautiful round, red balloon above the edge of the horizon.

Posted by Patrick Comerford at 23:02 No comments: