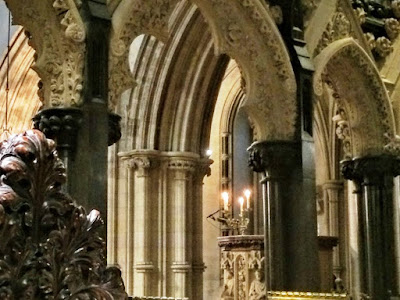 I was in Christ Church Cathedral, Dublin, this afternoon for Choral Evensong and the commissioning of six Diocesan Readers and one Parish Reader by Archbishop Michael Jackson.

The six new Diocesan Readers – Mark Acheson (Clontarf), Fionnula Drury (Taney), Margaret Healion (Zion), Myra Moody (Donoughmore and Donard with Dunlavin), Lisa O’Brien Corry (Blessington and Manor Kilbride with Ballymore Eustace and Hollywood) and Bert-Jan van Embden (Kill o’ the Grange) – are the first from the Diocese of Dublin and Glendalough to be commissioned after completing the new Diocesan Reader training programme at the Church of Ireland Theological Institute.

The new Parish Reader, Carol Barry (Kilternan), was trained on the programme run by Dublin and Glendalough Diocesan Guild of Lay Ministries.

It has been a joy to teach church history and liturgy to these seven students for the past few years and to see them commissioned as readers today. Others involved in their training who took part in this afternoon’s service include Canon Maurice Elliott of CITI, the Revd John Tanner, Director for Lay Ministry in the diocese, and Uta Rabb.

The Diocesan Readers have been studying for two years. They have completed three distance learning modules through Saint John’s College, Nottingham, and they have taken part in six day conferences I have been involved in teaching on at CITI. The parish readers complete two modules from Saint John’s College and also receive an introduction to liturgy and undertake brief parish placements.

Diocesan and Parish Readers come from many different backgrounds and have followed varied paths to answer their call to serve God.

The new readers make their declarations in the Cathedral Chapter House this afternoon (Photograph: Patrick Comerford, 2016)

Mark Acheson (Clontarf Parish) was born in Cork where he was baptised in Saint Fin Barre’s Cathedral by Dean Henry McAdoo, later Archbishop of Dublin. He worked in the insurance industry for over 36 years is now involved in part-time administrative work with Abbey Presbyterian Church and Clontarf Business Association. He is National Chaplain for the Boys’ Brigade in the Republic of Ireland, and has chaired both the Diocesan and Church of Ireland Youth Council.

Carol Barry, who lives in Leopardstown, is an active parishioner in Kilternan.

Fionnula Drury is a parishioner in Taney Parish, Dundrum. She is a guidance counsellor and has worked at second level, third level and in further education.

Margaret Healion, who is from Churchtown, is the Parish Administrator in Zion Parish, Rathgar. She spent 25 years in advertising and was Creative Director of McConnell Advertising for 10 years.

Myra Moody was born in the rural parish of Donoughmore and Donard with Dunlavin and has lived all her life in part of West Wicklow, and she was the Girls’ Friendly Society Diocesan President for the past four years. She was recently appointed a co-ordinator of youth and children’s ministry in the parishes of Baltinglass, Kiltegan and Tullow.

Bert (Bert-Jan) van Embden has been a member of Kill O’ the Grange parish, Foxrock, for over 40 years, where he has been involved in the Sunday School, the music group, the select vestry, home study groups and as a parish reader.

The intercessions at Choral Evensong were led by Dr Joan Fosdyke (Rathfarnham Parish) and the sermon was preached by another reader, Sylvia Armstrong (Clondalkin and Rathcoole).

The missing sailor in Cambridge
signals a threat to English foods 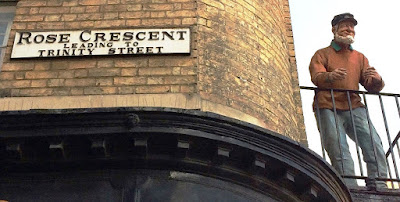 The sailor selling Cornish pasties has gone from his balcony in Cambridge (Photograph: Patrick Comerford)

Cambridge is an inland city, and the nearest beaches are 50 or 60 miles away, near Clacton-on-Sea. Although there are glimpses of the south Essex coast from some vantage points near the monastery in Tolleshunt Knights, I was conscious of being far from the sea while I was in Cambridge this week.

For many years, a mannequin Cornish sailor stood on a balcony on the corner of Rose Crescent and Market Street in Cambridge. The grizzled sailor, and the over-dressed pirate he replaced, seemed quite incongruous, given how far inland Cambridge is. But they had simply advertised the shop on the ground floor that sold Cornish pasties. 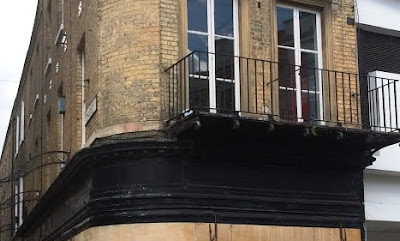 The empty balcony on the corner of Rose Crescent and Market Street in Cambridge (Photograph: Patrick Comerford, 2016)

The shop served traditional Cornish pasties, as well as more exotic ones, including a steak and Stilton version. It boasted its pasties were made in the traditional fashion, ‘with fresh diced beef skirt layered over freshly chopped potatoes, swede and onion sprinkled with our own blend of salt and peppers.’

The same company still has an outlet at Cambridge train station, but many Cambridge miss the pirate and the sailor who looked down benignly on the Market Stalls below in Market Hill.

As a vegetarian all my adult life, I cannot remember ever tasting a Cornish Pasty. But in European law, the name Cornish Pasty has Protected Geographical Indication (PGI) status, covers products whose ‘production, processing or preparation’ takes places in a specific area, although the products can still be finally baked outside of the designated production area.

Under EU regulations, the name Cornish Pasty is limited to products produced in Cornwall using a traditional recipe, with at least 12.5% beef and 25% vegetable content.

The EU regulations work throughout the European Union: feta cheese must be made in Greece, and the Waterford Blaa can only come from Waterford. Other well-known designations include Gorgonzola, Parmigiano-Regiano, Camembert and Roquefort. It is similar to the regulations for wine names: who would want to drink Chianti that is not from Tuscany or want to find what they thought was Champagne was a sparkling wine from Austria?

Newcastle Brown Ale became a problem a few years ago when the brewery moved to Gateshead, which is a separate town.

Many English cheeses are known by the name of their place of production (Photograph: Patrick Comerford, 2016)

In some cases, names have become generic and cannot be protected. Cheddar cheese originates in the Somerset village of Cheddar, but is produced in so many countries that the ‘Cheddar’ could not be protected, although the more specific ‘West Country Farmhouse Cheddar’ is.

The system works within the European Union, but cannot be enforced outside. So, for example, Buffalo Mozzarella is protected in Europe, but the name is used without restrictions by cheese producers in the US and other countries.

When the British Government triggers the ‘Brexit’ process, the protection these European regulations provide for traditional food products is going to fall by the wayside. Not only may you find your Cornish Pasty is uniquely English or that Cheddar is no longer made in Somerset, but Scotch Eggs, Welsh Lamb, Melton Mowbray Pork Pies, and even Cornish Clotted Cream come from anywhere in the European Union. 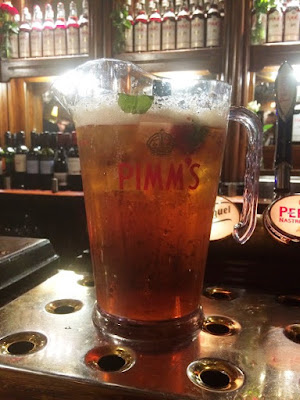 There was a feeling in Cambridge this week that summer was still lingering, and Pimms was still on sale in large jugs in many of the city centre pubs and in places by the river. But, while the English have never prided themselves in the quality of their drink products more than their foods, there is no doubt that the standards of English cuisine have improved notably in recent years, and the menus in many pubs are as good as if not better than the variety of beers and ales on offer.

Harriets Café Tearooms opened four years ago in cobbled Green Street, running from Gonville and Caius College in Trinity Street to Sidney Street and the front gate of Sidney Sussex College. All this week, a sign in the window advertised a ‘Truly English Experience.’ 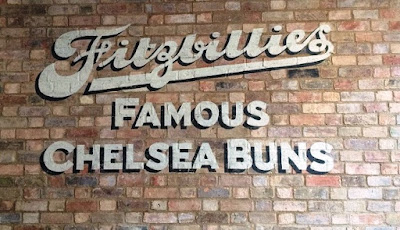 Fitzbillies, the iconic Cambridge café on Trumpington Street, was rescued from closure four years ago, and became so successful once again that it opened a new lookalike branch in Bridge Street, three minutes’ walk from Sidney Sussex, in May.

When I dropped in on Thursday [1 September 2016], the new café was abuzz and offering a similar selection of food and drink to the flagship shop on Trumpington Street, including their celebrated Chelsea buns.

But while Chelsea Buns and Eton Mess have no protection geographic designation, under EU laws many of the products on the stalls in the Market are going to loose their EU protection once Brexit is triggered. 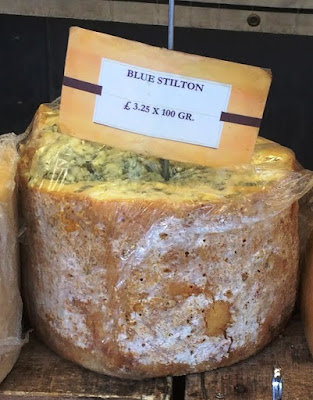 At present, the name Stilton, white or blue, is limited to cheese produced, processed and prepared in Leicestershire, Derbyshire and Nottinghamshire, using traditional methods. The product must normally be made using full-fat pasteurised cows’ milk from cows grazed in the designated area.

However, if this is not readily available, this may be sourced from the surrounding counties of Cambridgeshire, Northamptonshire, Warwickshire, Staffordshire, Greater Manchester, Cheshire, Yorkshire and Lincolnshire. Both cheeses must have a minimum fat content of 48%.

In the same way, Yorkshire Wensleydale must be cheese produced in Wensleydale, North Yorkshire, using whole milk from cows grazed in the designated area, and can be pasteurised or unpasteurised.

It is highly unlikely that once Brexit is triggered any producer is going to try to use once-protected designations such as English Wine or Welsh Wines. But cheese producers may soon regret the day Britain voted to abandon the European Union. 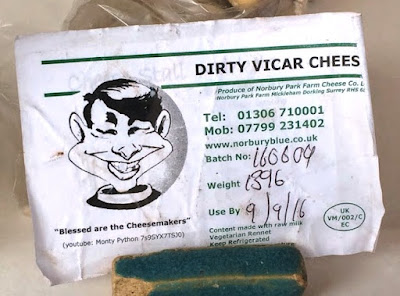 One cheese I did not try in Cambridge this week … it owes it label to Monty Python and not to any place of origin? (Photograph: Patrick Comerford, 2016)